A common situation in India—Men from the villages go to the cities to earn their livelihood—the women are left behind. They look after the old, nurse the young, work hard in the fields to eke out a decent existence and build up a dowry fund. They face the elements and all crises, all on their own and lead dry barren lives totally devoid of love and companionship. The men in the city too, work hard, live in slums and have no social status or family life. But they have two outlets—the commercial Hindi films which influence their lives and the red light area which they frequent often. They return to the village once in 2/3 years and fix up marriages, settle land disputes, make their wives pregnant and go back to the city once again.

‘Rihaee’ (Liberation, based on a real incident, takes place against this background. Amarji and his friends work as carpenters in Bombay while the women stay in a little village on the Gujarat- Rajasthan border. The story takes off with the arrival of Mansukhji, also a carpenter, returning to his village after many years in Dubai. The presence of a man in the village, after a long time, creates a total upheaval. With the status of a very eligible young widower, he is much sought after in the marriage market and he plays for the highest bidder. But being the rake that he is, he creates total havoc amongst the women, not even sparing the good, virtuous Takubai who is married to Amarji and has three daughters. He leaves after a while without getting trapped in the matrimonial snare. The women continue to lead their life of hardship and soon it is realized that Sukhi, wife of Roopji and Taku are pregnant. Sukhi, afraid of her hot-headed, chauvinistic husband Roopji (who has been responsible earlier for the traumatic death of his first child), aborts the child while Taku decides to keep it, after a great deal of introspection.

The men return—Amarji is horrified to find his wife carrying another man’s child. He insists that she abort it, but she stands steadfast, wanting to keep the child, not for the love of Mansukh but because it is part of her own flesh and blood. They men are more than upset. To safeguard their honour, they call apanchayat (village council) meeting.

They hope to force Taku to abort the child or ostracize her from the community, The meeting is disrupted by the womenfolk who get motivated after an old woman lashes out at the menfolk. She, who has seen life, exposes the social hypocrisy and the double standards in society. The old woman further emphasizes that it is not sexual freedom or sexual equality they are asking for but the need to be treated fairly as human beings. Amarji, having heard and seen enough, realizes that they are all victims of their circumstances and is man enough to face the wrath of the other men, when they insist that Taku should be thrown out of the village. He tells them that true manhood which is so important to them, is in accepting reality, taking the bitter with the sweet like God Shankar and continuing to stand. He sends them away and accepts his wife. ‘Rihaee’ is an expose on the loves and lives of this class of Indian society. 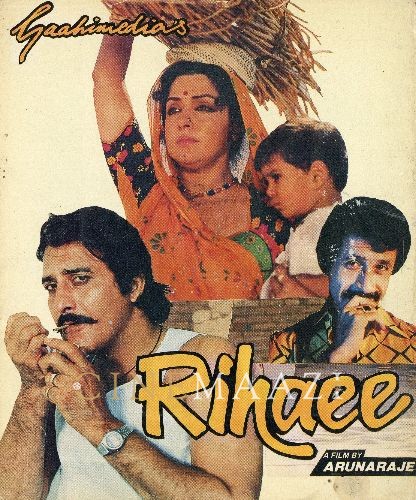