Yes, it is SANGRAM; a saga of the eternal battle man has been fighting since his earliest days-the battle of life, the struggle against that uncontrollable power called Destiny.

Thakur Narendra Singh, a Police Inspector in a small town had had enough of cruel blows of destiny in losing his four previous issues and when the fifth, a son was born, his wife died leaving the baby to his care. The baby grew up into a boy; and the doting father, in spite of the warnings of his friend and neighbour Lala, never realised that as an inevitable consequence of his over-affection for him, Raje was being spoilt and was contracting all sorts of evil habits.

Twelve years passed and Raje popularly known as Kunwar, had become a veritable criminal, and an adept in gambling and other crimes. However he managed to keep his activities secret from his over credulous and gullible father, who was then posted at a distant place. Sometime later, Thakur Sahib retired and went to his home town to arrange the almost settled marriage of his son with Lala's daughter, Kanta. The same day Kunwar's fellow ruffian, Pyarelal, betrayed Kunwar to the Police. But on the timely warning of his girl-friend Mohini Kunwar escaped. In the dark and rainy night, he unknowingly reached his own town. There he accidently met Kanta, who gave him shelter in the Lala's shop. Both fell in love with each other not recognising each other.

Under the softening influence of Kanta's love for him which became more free and expressive after Thakur's arrival. Kunwar's stormy and hazardous career was coming to an end; and when his life was taking a definite turn in favour of building a sweet home, one day Pyarelal came and disturbed his peace on the question of the payment of some old dues, a fight ensued between the two, in which Pyare Lal was fatally wounded. For this crime, Kunwar was identified and arrested. When Thakur came to know of the whole truth from Inspector Sohan, he was greatly shocked. The utter frustration of his life had come.

The devil in Kunwar woke up once again, and this time with all its ferocity, when he learnt in jail, that his beloved Kanta was going to be wedded to Sohan. He broke through the jail and kidnapped her immediately after she had been wedded. When Thakur learn t of this, he wanted to end his life. Just then news came that Kunwar had been traced. In a hysteric mood created by the jumbling of diverse and tense feelings Thakur reached the spot where Kunwar was defying the police force with a revolver. With a grim face, revolver in hand, Thakur advanced towards Kunwar who was aiming a revolver at his father, warning him not to proceed any further. Father and son, son and father-target and shot-shot and target! Result ? ? ? It be better seen on the screen. 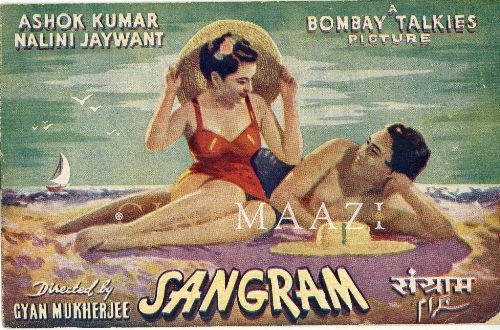