Indian womanhood is considered the very essence of a holy and pious life. Her loyalty to her husband is her latent strength and also her shield of protection against the onslaught of anything that may befall her. To strengthen this faith was born a daughter to Mother Earth which was Seeta Maiya for the people but actually an avatar of Goddess Laxmi. On attaining womanhood she married Shri Rama, avatar of Vishnu, after he had successfully wielded and broken the Shankar Dhanush. This union brought joy and happiness to the whole world but Fate had ordained otherwise. Even before the coronation of Shri Rama they both had to leave the palace and go out in the woods. The one who had never placed her feet on anything other than soft mattresses had to walk through thorny fields and barren rocks to keep pace with her husband.

As if this was not enough, the King of Lanka abducted her and took her away from the modest cottage where they had taken shelter during their life in the forest. In search of his wife Shri Rama went from place to place and was an embodiment of grief in his loneliness.

Rambhakta Hanuman, the faithful and loyal servant of Rama, could not bear the sorrow of his master. He tried everywhere and all over when ultimately in Lanka he discovered Seeta hidden in a garden by Ravana. Then together with other followers of Rama he built a bridge which made it possible for them to cross the sea and attack Lanka. Ravana was killed in the war.

Ram and Seeta were re-united after a gruelling test (Agni Pariksha) which Seeta had to undergo so that the people may not question her chastity. Even then after returning to Ayodhya a washerman made foul remarks about Seeta. With a view to remain and ideal King Shree Rama, with a heavy heart, ordered to a life of exile. At that time Seeta was an expectant mother and was searching for shelter when she was picked up by Walmiki, the great sage. He took her to his ashram. That was the time when he had just completed writing Ramayana.

Seeta gave birth to two sons - Lava and Kusha, who received their first lessons under the able guidance of Walmiki. He also taught them the Ramayana which he had written without revealing to them that they were the sons of Rama and that their mother was in reality Seeta. In Ayodhya, Shri Rama started the Ashwamedha Yagna. Lava and Kusha came there and sang the Ramkatha but they were surprised to see Seeta's idol put next to Shri Rama. Now knowing that Shri Rama had discarded Seeta they started hating Rama and returned to their Ashram.

The horse let loose by Shree Rama came to the Ashram of Walmiki where the two boys captured it and knowing that the horse belonged to Rama the unjust King, they decided to fight him.

What was the ultimate result of all this? Well, you must, nay cannot but see Seeta Maiya for the said results. 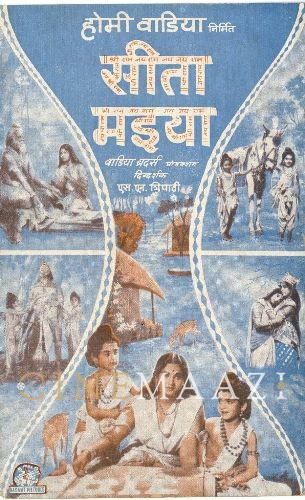