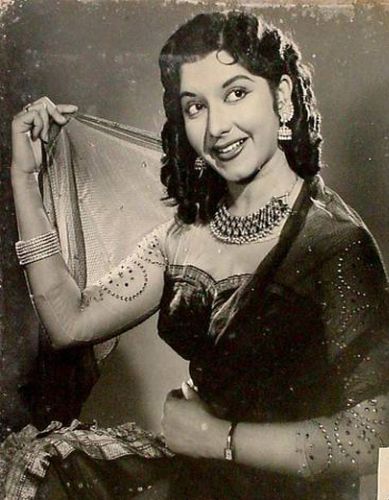 Chitra, popular action queen of the 60s who featured in several low-budget films in the 50s and 60s, had the privilege of appearing in India’s first coloured jungle film, Zimbo (1958). A gifted artiste, she was thus considered Indian cinema’s answer to Hollywood’s Jane, essayed by Maureen O’Sullivan, in the Tarzan series, which was a popular hit. Zimbo was one of the several successful hits that made Chitra a box-office name at a young age. She starred in more than 50 films in the course of her career, most of which were successful.

Born in Hyderabad, and fond of the movies, her father would bring her to Bombay during the school holidays. After a meeting with P N Arora, she was cast in Chor Bazar (1954), starring Shammi Kapoor. She thus became her family’s bread-winner at a young age. Education took a backseat, though later she did complete her matriculation in Urdu. On the heels of Chor Bazaar, she made her debut in Filmkar Ltd.’s costume picture Maan (1954) where she played the heroine opposite Ajit. Film offers poured in and she starred in numerous fantasies, thrillers, and action films throughout the 50s and 60s. Starring opposite Azad in faux Tarzan films Zimbo (1958) and Zimbo Comes to Town (1960), she acted opposite him in many more jungle epics including Tarzan and Captain Kishore (1964), Tarzan and Delilah (1964), Tarzan Aur Jalpari (1964), and Tarzan Aur Circus (1965) as well as several other action films. Among her many fantasy pictures are Sakhi Hatim (1955), Son of Ali Baba (1955), Lal-e-Yaman (1956), Sair-e-Paristan (1958), Maya Jaal (1962), Patel Nagri (1962), Khufia Mahal (1964), Magic Carpet (1964), Main Hoon Jadugar (1965), Noor Mahal (1965) in which she played a triple role, and Jadoo (1966).

Her career saw her working with actors like Daljit, Pradeep Kumar, Ajit, Mahipal, Feroz Khan, and Dheeraj under the direction of filmmakers such as P N Arora. Homi Wadia, and Nanabhai Vakil with whom she did 19 films. Beginning in 1954, Chitra starred in more than 50 films, most of which were successful. However, her career nearly ground to a complete halt towards the end of the 60s with Bahurupee (1969). This Shree Ram Bohra directorial, in which she starred alongside newcomer Dheeraj Kumar, was a flop.

However, the blow to her career had occurred even earlier, when her parents had fallen seriously ill. Their deaths impacted her severely. What is more, her career was mismanaged, as a result of which producers kept away from her. Unaware of the reality as she was too busy with her work at the time, the damage could not be undone.

Of her nearly 15 years of reign as a leading heroine, she did four shifts a day, working in four films simultaneously, eating and sleeping in the car, while going from one place to another, and always waking up at 5 am. A loner, she bore the financial burden of her family from a young age, ensuring her parents and siblings lived comfortably.

A self-made star, she did not however feel fulfilled as an artiste and yearned to make a comeback in her later years. However, substantial roles for a yesteryears’ star are not easy to come by, and she had to be content with bit roles in Aap Beati (1976), and Kamal Amrohi’s Razia Sultan (1983), starring Dharmendra and Hema Malini which she bagged due to her fluency in Urdu. Cheated in her private life by one she trusted, she was left bereft.

Chitra was the niece of actress Nigar Sultana. Her elder sister, Yusuf Unnisa Begum was also inspired to join films, taking on the name Paras.

Chitra passed away on 11 January, 2006 following a prolonged illness.