Two young and loving hearts - GEETA and ANAND married each other, defying the convention s of caste and class.

Anand was comparatively poor, but Geeta adjusted herself to this poor life. They dreamt of a life of peace and happiness.

Their dreams were, however, shattered when Anand was diagnosed to be suffering from cancer.

Geeta tried her best to get  him  cured  and  sold everything she had for his treatment - till she had only one thing left to sell - herself and her honour. This, too, she sacrificed, for Rs. 5000/- were needed for the delicate operation.  But, as fate would have it, when she went to the hospital with the required amount, it was too late - Anand had gone to the world where this money was worthless. He was dead.

Geeta tried to commit suicide but here, too, even Death did not oblige. She was saved and came into contact with DEEPAK, a kind-hearted social worker.

Deepak, out of the goodness of his heart, tried to share the sorrows and grief of Geeta.

But REETA, a Society girl who had her eyes on Deepak, could not tolerate anyone coming into Deepak's life.

Coming to know of Geeta's part, she blackmailed her to leave Deepak alone.

......till one day Geeta sought refuge from this cruel world in the comforting arms of Death carrying within her heart her SHIKWAH against Fate, Destiny, God! 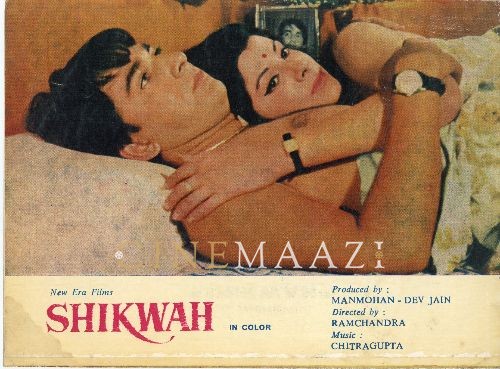