Bharat is a land of Saints and Savants—“Shiv Bhakta” depicts a story of one of the greatest among them—a hunter who became a true devotee.

Manimanta and Alka, a happy pair of lovers in Gandharvaloka, are forced to come to earth as mortal beings, on account of a curse. They are discovered by a Chief of hunters in the jungle as babies. The Chieftain brings them home and adopts them. In course of time, the babies Deena and Neela grow up and are married. They both lead a happy life. But Fate would not let things be like that! Deena who is the pet child of the Chieftain is envied by a group of hunters. They hatch a plot and conspire against Deena, which culminates in the ex-communication of Deena and Neela from the community of hunters. Deena receives a rude shock at this injustice and in helplessness and utter desperation, he becomes an enemy of God and faith.

Excommunicated from their home, Deena and Neela reach the sacred Kalahasti and try to settle there in peace. Deena daily goes to the jungle for hunting but comes without any prey. And Deena’s disbelief in God is intensified further on account of his troubles and his vehement cry against the existence of God becomes louder and louder. But Neela’s faith in the omnipotence of God stays and remains unshaken.

One day when it is raining heavily Deena enters the Temple of Kalahasthishwar, not knowing that he is actually entering a temple. In the Temple he happens to meet Kashi, nephew of Kailashnath Shastri who is the Chief Priest of the Temple. This meeting proves to be a turning point in Deena’s life. Kashi, just to escape from this robust and rude hunter, asks him to repeat the mantra of ‘OMNAMASIVAYA’ and assures him that the mantrajapa will give him what he wants, namely the prey. Deena does so, becomes a changed man and is filled with the spirit of God.

Kailashnath Shastry, the hypocrite Chief Priest, though physically so near the Deity, is so far from Him, because of his lust and infatuation to Rani, the temple-dancer.

He steals the necklace belonging to the temple to please Rani. But the poor Deena is accused of theft.

See how the Divine Benevolence clears up the muddle, how Deena is put to the Supreme test and by an act of unparalleled sacrifice, Deena is acclaimed the Great “SHIVA-BHAKTA” 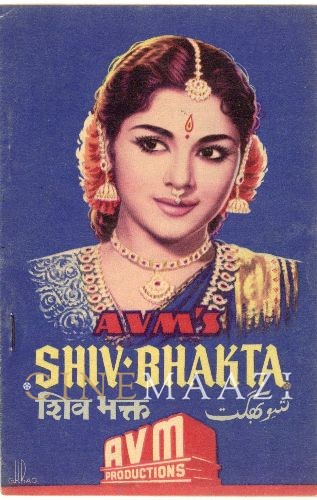