Since the time of immemorial always small mistakes and trifle matters have taken an ugly shape and pushed the world personalities in the battlefield and Krishna Arjun Yuddh was also due to a small mistake of Chitrasen, the Sangeet Vidya Guru of Arjun.

It happened when Subhadra the wife of Arjun and Pandav was were very much upset of the sudden disappearance of Arjun and in search, the grief-stricken Subhadra had to go to Dwarka to seek the help of her brother Lord Krishna to trace Arjun.

On other hand, Arjun was on Yatra when he met his Guru Chitrasen who took him to Indrasabha ' to attend his marriage. On the occasion of marriage, Narad gave blessing to Chitra. sen's wife that she would not be a widow in her lifetime and at the same time passed some adverse remarks about Arjun's wife which created doubts in the mind of Arjun about the loyalty of his wife, Subhadra towards him. Arjun, in the disguise of Sadhu, went to Dwarka to verify his doubts and Barbarik who belonged to Pandava played a big part with his magic power.

After the marriage, Chitrasen along with his wife went to "Bharat Yatra" on their Viman. Chitrasen after chewing a Betel (Pan), he spit which accidentally fall on the palm of Rishi Galva who was offering prayers.

Rishi Galva enraged with anger took a vow to take revenge and immediately approached Lord Krishna and got promise that Chitrasen would be punished with death penalty.

When wife of Chitrasen came to know of Lord Krishna's promise, she rushed to Narad and reminded him of his blessings. Narad tried to pursued Lord Krishna but faild. Narad played his full part to keep up the blessing and ultimately Arjun and Pandav had to take the side of Chitrasen against Lord Krishna in the Yuddh.

What was the outcome of the Krishna Arjun Yuddh and how Subhadra, the wife of Arjun blessed her brother Lord Krishna to be victor in the Yuddh against her own husband Arjun and how she proved her loyalty towards Arjun and what part Barbarik, the great magician of the time played in the whole story can be seen on the silver screen. 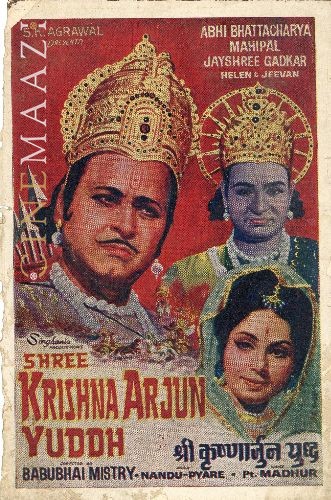