A tart temper never mellows with age and a sharp tongue is the only edged tool that grows keener with constant use. How true it was in the case of Professor Rajan’s wife! Her unbridled tongue and un-understanding nature had turned, what would have otherwise been a happy and peaceful home, into a veritable hell.

Professor Rajan’s lot was pitiable. The irritating domestic life had destroyed his peace of mind no less than it had adversely affected his career. In his misfortune his only hope was, however, his young daughter Sudha, who loved him and adored him and always stood by his side against the slashing temper of her mother bearing invariably the brunt of her foolish wrath.

Such was the background of Professor Rajan’s life when destiny sprang upon him a great surprise. One day as he was going to college somebody shoved upon his unwilling hands a picture of a “STAGE” DANCER NEELAM who was no other than the “Love” of his younger days—Kamini. Human as he was he felt the cords of his heart getting in time with the music of the spheres! His dormant self was waking to new realities after a lapse of seventeen years!

He met Kamini. She drenched her face with the welling tears and through sobs and smiles she narrated the sorrowful tale of her frustrated love that she had endured through years. (She had wandered through the land like a gypsy nurturing in her heart the hope of seeing her Rajan one day.) Professor Rajan was stirred to the depth of his heart but ws utterly helpless. He could only console her. He could not become hers.

This episode made him moodier than ever. He was trying to balance between his duty towards his family and his old but unabashed love for the girl, who had made her life a complete desolation for his sake. His wife did not take long to notice the change. She sniffed about but she did not know what the real matter was till one day she discovered the photo of Kamini and the pamphlet. It gave her a shock. She lost no time in hurling an accusation at the Professor for his questionable morals and when he raised his voice in sheer self-defence, she, as if to give a proof positive, threw at him the framed photo of Kamini she was holding and injured his head. This happened at a time when Sudha was enjoying the birthday party of Anand, her boy friend—the son of the Superintendent of Police. The poor girl was hardly aware of the impending danger on her father who was wending his way to Kamini’s hotel only to be arrested on a charge of her murder. It was a stupendous task for Sudha to save her father. In her utter helplessness she turned to Anand. He spoke to his father only to be told that the whole evidence went against the Professor and he could not but do his duty. She did not give up hope but became all the more resolute to find out through her own efforts the real culprit. She believed in her father. He was innocent. Luckily for her she managed to get a clue in a half-finished song recovered from the rooms of Kamini. Following this clue she went to Poona and putting aside the conventional modesty of a family girl she joined the Theatre of the former employer of Kamini. It was a hazardous job to be in those surroundings but she did not flinch. Her mission was more important than anything else in life.

Anand, disgusted at his father’s unhelpful attitude, soon followed Sudha to Poona but was amazed at what Sudha had become—a stage dancer! There arose misunderstandings but they were ironed out by Chamku, the Theatre Manager. Sudha succeeded in laying hands on the documents which clearly proved that Shamsher—the Theatre Proprietor—was the culprit. But before she could escape with them she found herself surprised by Shamsher. However, he was soon outwitted and Sudha with the active cooperation of Anand and Chamku made good her escape. Shamsher would not take this defeat lying down. He made a hot pursuit, ultimately catching her in the train bound for Bombay. On recovering the documents he was about to throw Sudha out of the running train when 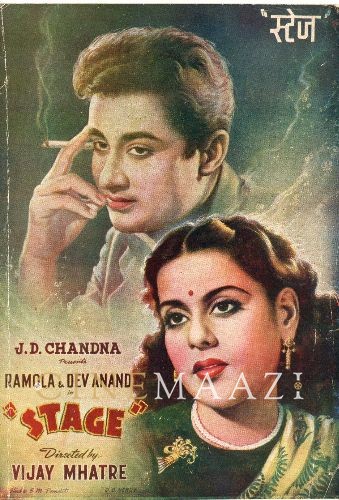