It is the story of The Good, The Bad, The Ugly.

On one side is Ravi (Jeetendra), a young man whose profession is to catch criminals and get the rewards declared on them.

On the other side is a notorious criminal Rana (Amjad Khan) who has escaped from jail for 24 times and is carrying a reward of Rupees One Lakh.

The ugly character is Daku Mnngal Singh (Ranjit) who has terrorised the Rajasthan area.

Ravi is in love with a dancing girl Reshma (Reena Roy) with whom he wants to settle in life. Ravi in a dashing car chase, catches hold of Rana and gets the reward of Rupees One Lakh, which he pays to Muni Bai who had been running a Kotha where Reshma used to dance. Outside the Court compound Rana threatens Ravi that he wilI escape from jail and kill him

Ravi settles his life with Reshma and now wants to catch Daku Mangal Singh. But the table turns and Mangal Singh captures both Ravi and Reshma and throws them away in the desert.

Rana escapes from the jail and reaches Ravi's place to kill him. Here at Ravi's place he finds certain things and from this juncture the story takes new twists and turns.

Now Rana wants to save the life of Ravi from Daku Mangal Singh.

Why he wants to save Ravi?

What has transformed him at Ravi's place?

Is he able to save Ravi?

For all these revelations see "ZAMAANAT". 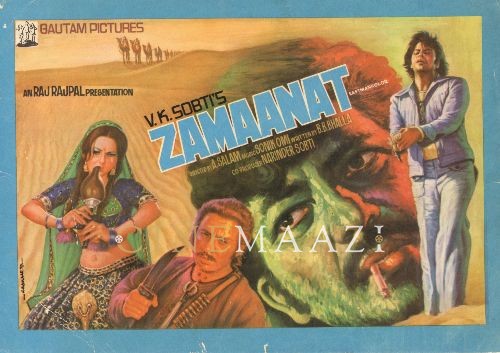