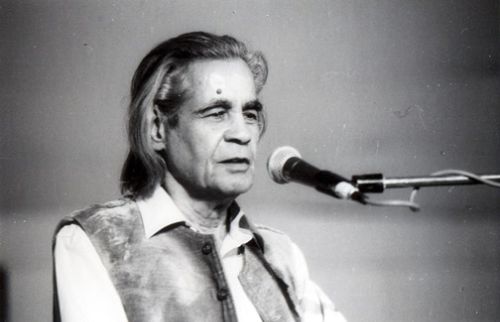 Ali Sardar Jafri was a prolific and versatile writer, poet, critic, and film lyricist. One of the most robust pillars of the Progressive Writers’ Movement, Sardar was a staunch defender of the country’s pluralistic and egalitarian traditions.

Born in an aristocratic family of Balrampur in Uttar Pradesh on 29th November 1913, Sardar spent his formative years in his home town. He completed his schooling in Balrampur. In 1936, he was admitted to the Aligarh Muslim University but was expelled in 1936 because of his political activities.  He graduated from Dr. Zakir Hussain College (Delhi University) in 1938.  His subsequent postgraduate studies at Lucknow University ended prematurely following his arrest for writing anti-war poems, and for taking part in political activities organized by the Indian National Congress as secretary of the university's students' union. Sardar later shifted to Marxism and remained a life-long communist holding a liberal and balanced view of the political and social realities.

Sardar began his literary career with a collection of short stories - Manzil (Destination) in 1938. His early influences were Josh Malihabadi, Jigar Moradabadi and Firaq Gorakhpuri. It was in 1943 that he made his mark as a poet with Parvaaz (Strength to Fly). In the process of participation in the national movement, his family got dislocated from their comfortable aristocratic or upper-middle-class existence and were compelled to live a hard life. To earn a living, Jafri had to earn. He took up a job as an assistant editor of Naya Adab, a literary journal devoted to the Progressive Writers' Movement which continued to be published until 1949.

In 1942, he left for Bombay where he became a prominent leader of the Progressive Writers’ Movement and Indian People’s Theatre Association (IPTA). Between 1948 and 1978, he published eight poetry collections, including, Nai Duniya Ko Salaam (1948), Khoon Ki Lakeer, Amn Ka Sitara, Asia Jaag Utha (Asia Awakes) (1951), Patthar Ki Deewar (1953), Ek Khwab Aur, Pairahan-i-Sharar (1965) and Lahu Pukarta Hai (1965). These were followed by Awadh ki khak-i-haseen, Subhe Farda, Mera Safar and his last anthology entitled Sarhad, which the then Prime Minister Atal Bihari Vajpayee carried with him on his bus journey to Lahore in 1999. The Prime Minister had invited Jafri to accompany him on this trip but ill health prevented him from doing so. Sarhad is also an audio album dedicated to Indo-Pakistan amity produced by Squadron Leader Anil Sehgal and composed and sung by "Bulbul-e-Kashmir" Seema Anil Sehgal. Atal Bihari Vajpayee made history when he presented Sarhad, as a national gift, to the then Prime Minister of Pakistan Nawaz Sharif, during the historic Lahore Summit, 20–21 February 1999. It was another milestone in Jafri's life.

He started his film career by writing lyrics for K. A. Abbas’s Dharti Ke Lal (1946), a film produced by IPTA. The music for the film was composed by Pandit Ravi Shankar. In 1952, he wrote for Zalzala (1952), Annadata (1952), and Anhoni (1952). His song from Anhoni - Is Dil Ki Halat Kya sung by Lata Mangeshkar became very popular. His next films were Dhobi Doctor (1954) and Farar (1955). His song from Footpath (1953) sung so evocatively by Talat Mahmood, Shaam-e-gham ki kasam, aaj ghamgeen hain ham remains as haunting as ever. The song was composed by Sardar together with Majrooh Sultanpuri. He was very close to Majrooh Sultanpuri. In his foreword for Majrooh's book "Never Mind Your Chains", Sardar refers to Majrooh as his "younger brother in poetry and struggle".

For K. A. Abbas’s Pardesi (1957), Sardar and Prem Dhawan wrote the songs together. The music for the film was composed by Anil Biswas. After some gap, he wrote songs for K. A. Abbas's three films - Shehar Aur Sapna (1964), Humara Ghar (1964) and Aasmaan Mahal (1965). The song, Toone samjhi hi nahin kya hai haqeeqat meri from Aasmaan Mahal sung by Vijaya Majumdar had beautiful lyrics written by Sardar. The other two songs from the same film - Ae raat zara aahista guzar sung by Madhukar and Geeta Dutt, and Khubsurat hai teri tarah sung by Mahendra Kapoor have beautiful lyrics.

Again, after some gap, he wrote the songs for K. A. Abbas’s The Naxalites (1980), his fifth with the filmmaker.

He was involved in several social, political, and literary movements. On 20th January 1949, he was arrested at Bhiwandi, for organizing a (then banned) Progressive Urdu Writers' conference, despite warnings from Morarji Desai, the then Chief Minister of Bombay State; three months later, he was rearrested.

Many of his poems like Nai Duniya ko Salaam (Salute to the New World) and Asia Jaag Utha (Asia has Awakened) were translated into many Indian and foreign languages. He struck a close friendship with Turkish revolutionary poet Nazim Hikmat and Chile’s Nobel Prize-winning poet Pablo Neruda. So fond of Nazim Hikmat he was, that he named one son Nazim and the other Hikmat. His poetry had a place for Krishna and his Gokul, Buddha and his disciples Anand and Chandalika, the glory of the Vedas and the Radha of Vidyapati. He received many awards including Padma Shri, Pakistan’s Iqbal Award, and Jnanpith Award.

It was poetic justice that the same Aligarh Muslim University that had expelled him, honored itself by conferring an honorary doctorate on him. He was a people’s poet, and truly the Sardar of Urdu poetry.

In 1948, Ali Sardar Jafri married Sultana, the woman he loved, married, and spent 52 years of togetherness till his last breath. Sultana offered a vivid description of the circumstances of their marriage in an article she penned after her husband’s death. “On January 30, 1948,” she wrote, “Sardar and I royally rode in a local Bombay bus to the office of the Registrar of Marriages. Sardar, the bridegroom, had a princely sum of three rupees in his pocket! Krishan Chander, Ismat Chughtai, and Khwaja Ahmad Abbas were the witnesses to our court marriage. Later, Ismat celebrated the occasion and took us all out for ice cream! After marriage, our first abode was a commune in Andheri East, a faraway suburb of Bombay then, with Shaukat and Kaifi Azmi as neighbors. It was a godforsaken bungalow where some Italian prisoners were kept till 1945. It was the center for the IPTA.”

In the course of his literary career spanning five decades, Jafri also edited anthologies of Kabir, Mir, Ghalib and Meera Bai with his own introductions. He also wrote two plays for the Indian People's Theatre Association (IPTA), produced a documentary film Kabir, Iqbal & Freedom and two television serials: the runaway success, the 18-part Kahkashan, based on the lives and works of seven noted and highly popular Urdu poets of the 20th century he had known personally viz. Faiz Ahmad Faiz, Firaq Gorakhpuri, Josh Malihabadi, Majaz, Hasrat Mohani, Makhdoom Mohiuddin and Jigar Moradabadi and the equally popular Mehfil-e-yaaran in which he interviewed people from different walks of life. Both serials had tremendous mass appeal. In addition, he published his autobiography. He was also the editor and publisher of Guftagu, one of the leading Urdu literary magazines of the Indian sub-continent.

Jafri did not confine his poetry to the trials and tribulations of the people of India alone. He spoke for the African girl (Afreeki Ladki), lent words to the torment of an Abyssinian boy (Habshi mera bhai) and paid tributes to Pablo Neruda, Elia Ehrenberg and Nazim Hikmet.
Jafri genuinely believed in the idea of Indo-Pak peace and friendship.

I have come to your country, friends, this time
Neither for a get-together of melody and song nor for poetry
If it’s only a question of your ego, then
Here, I extend my hand in friendship

You come from the garden of Lahore, carrying flowers
We come, carrying the light of the morning of Banaras
The freshness of the breeze of the Himalayas
And after that, ask “who is the enemy”?

He was conferred the Padma Shri in 1967. In 1997, he was awarded the Jnanpith Award. He was the recipient of several other significant awards and honours. 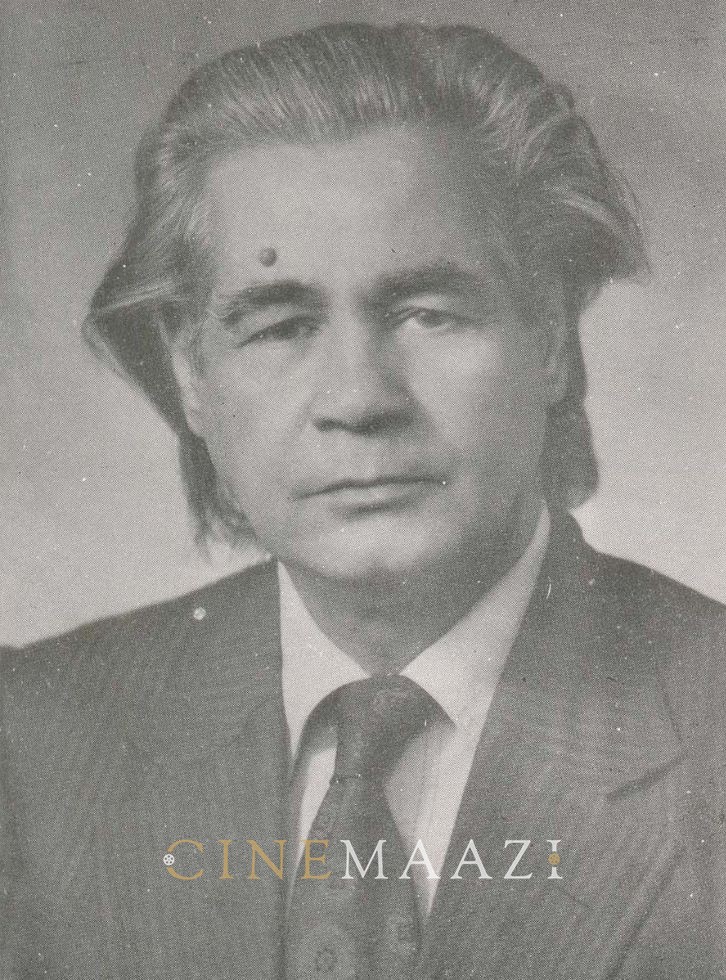