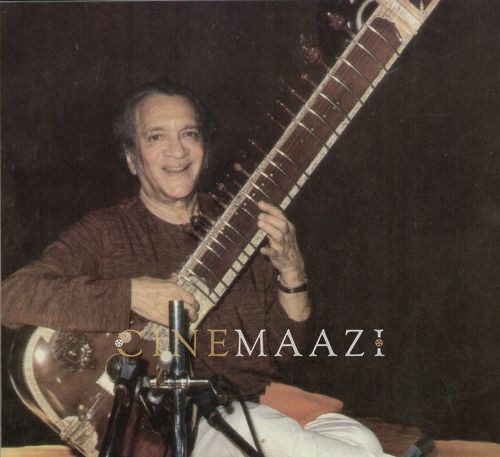 The world’s best-known exponent of North Indian classical music in the second half of the 20th century, sitar virtuoso, composer, and founder of the National Orchestra of India, Pandit Ravi Shankar was also influential in inspiring appreciation of Indian music internationally. In the realm of film music, he composed the scores for Chetan Anand’s directorial debut Neecha Nagar (1946), K A Abbas's Dharti Ke Lal (1950), director Satyajit Ray’s famous Apu trilogy (1955–59), Hrishikesh Mukherjee’s Anuradha (1960), Tapan Sinha’s Kabuliwala (1957), Ray’s Paras Pathar (1958), Godan (1963) and Meera (1979). An international music icon, he created a passion among Western audiences for the Indian classical music ragas. His work with George Harrison of the Beatles and the composer Philip Glass influenced both popular and classical music. Throughout his career, he collaborated with performers from various Asian and Western traditions such as violinist Yehudi Menuhin, the flautist Jean-Pierre Rampal, and saxophonist and composer John Coltrane, creating new, never-heard-before hybrid sounds. Winner of several lofty awards, he also won four Grammies, the Bharat Ratna, and the Padma Vibhushan.

Born on 7 April 1920 into a Bengali family in the erstwhile princely state of Benares, he was the youngest of seven brothers. His father, Shyam Shankar Chowdhury, a Middle Temple barrister and scholar from East Bengal (currently Bangladesh), was a respected statesman, lawyer and politician, who served as the dewan (Prime Minister) of Jhalawar, Rajasthan, for several years. His mother, Hemangini Devi, was the daughter of a prosperous landlord. Raised by his mother in Benares, he became a member of his dancer-choreographer brother Uday Shankar’s dance troupe, learning to dance and play various Indian instruments, and travelled across the world. Visiting Europe and the United States in the early to mid-1930s, he learnt French, explored Western classical music, jazz, and cinema, and became familiar with Western customs.

Giving up his career in dance, Shankar moved to Maihar in 1938 to study Indian classical music under the tutelage of Allauddin Khan, the lead musician at the court of the princely state. Under the rigorous training of Khan, Shankar mastered the sitar and surbahar, learning ragas as well as the musical styles dhrupad, dhamar, and khyal, and the techniques of the rudra veena, rubab, and sursingar musical instruments. Often studying with Khan’s children Ali Akbar Khan and Annapurna Devi, whom he would later marry, he first performed publicly on sitar in December 1939, rendering a jugalbandi (duet) with Ali Akbar Khan who played the sarod.

Completing his training in 1944, he moved to Bombay, where he went on to join the Indian People's Theatre Association (IPTA), composing music for ballets in 1945 and 1946. Recomposing the music for the popular song Sare jahan se achcha at the age of 25, he recorded music for HMV India and went on to work as a music director for All India Radio (AIR), New Delhi. He founded the Indian National Orchestra at AIR and composed for it, blending Western and classical Indian instrumentation in his compositions.
Making his foray into films, he started his career as a music director with filmmaker Chetan Anand’s Neecha Nagar in 1946. The film won the Grand Prix at the first Cannes Film Festival, with the music of the film also winning international acclaim. It was described by legendary music director Maurice Jarr as 'objectivity mingled well with a romantic rebel touch'. Describing Chetan Anand as a source of creative inspiration, he would go on to credit Anand with getting him to learn the art of composing film music.

Shankar followed up his debut as music director with his compositions for K A Abbas’s Dharti Ke Lal. The film offered him the opportunity to score a different kind of composition. Unwilling to compose songs for the film based on the famine of 1942, he nevertheless did full justice to the project, employing mainly the sitar and bamboo flute for the film’s background score. His use of the single sitar counter to actor David whistling in the night is noteworthy. Chetan Anand’s 1952 film Aandhiyan composed by Ali Akbar Khan, the title and background score featured Ali Akbar Khan’s sarod, Ravi Shankar’s sitar and Pannalal Ghosh’s flute.

One of Shankar’s most prominent works is Satyajit Ray’s Apu Trilogy, comprising Pather Panchali, Aparajito, and Apur Sansar. His simple yet stirring music is one of the defining factors of the internationally acclaimed trilogy, winning wide appreciation. The music of Pather Panchali was, in 2007, ranked at number four by the Guardian on its list of the greatest film soundtracks of all time.

He also scored the music for the films Godan and Anuradha. His haunting melodies for these films were rendered by Lata Mangeshkar and Mohammed Rafi. Anuradha, which told the tale of a singer who forsakes her career after she marries a doctor, included three classical masterpieces, namely Haye re who din kyon na aaye, Jaane kaise sapnon mein kho gayi aankhiyan and Saanwre saanwre. Lata Mangeshkar would later reveal that Panditji was a very good singer himself; he sang out the film’s compositions for her, and she followed his voice. He was also nominated for an Academy Award for Best Original Music Score for his work on the 1982 film Gandhi.

By the time he composed the music for Mrinal Sen’s Genesis (1986), he would go on to admit that at that stage, film music was no more his forte. After serving as music director of All-India Radio from 1948 until 1956, he had begun a series of European and American tours. Over the course of his long and glittering career, he became renowned as the world’s best-known exponent of Hindustani (North Indian) classical music. He performed with India’s best percussionists, creating innumerable successful recordings. In 1962 he also founded the Kinnara School of Music in Bombay (now Mumbai), following it up with a second Kinnara School in Los Angeles in 1967. However, some years later he closed down both schools maintaining that he had become disillusioned with institutional teaching.

The 1960s saw Shankar capture world interest in Indian music. His concert performances with popular American violinist Yehudi Menuhin and his association with George Harrison, the lead guitarist of the Beatles, won the attention of the West. Several musicians went on to be influenced by his compositional style, such as the jazz saxophonist John Coltrane and the composer Philip Glass, with whom Shankar collaborated on the album Passages (1990). He participated consummately in both traditional Indian music and Indian-influenced Western music. His concerti for sitar and orchestra, and the Raga-Mala (Garland of Ragas) in particular, is a fitting example of the latter activity.

Acknowledged as one of the top sitar players of the second half of the 20th century, he developed a style distinct from that of his contemporaries, incorporating influences from rhythm practices of Carnatic music. He popularised performing on the bass octave of the sitar for the alap section, becoming known for a distinctive playing style in the middle and high registers which used quick and short deviations of the playing string and his sound creation through stops and strikes on the main playing string. Experts noted his fondness for rhythmic novelties, such as the use of unconventional rhythmic cycles. He also promoted the jugalbandi (duet) concert style. He is said to have introduced numerous new ragas such as Nat Bhairav, and Ahir Lalit, as well as a new percussive sitar technique called Goonga Sitar, whereby the strings are muffled with a cloth.

In the course of his lifetime, Shankar won several national and international acclaims. He bagged the Grammy Awards for the albums West Meets East (1966), a collaboration with Menuhin; The Concert for Bangladesh (1971), a compilation of performances by Shankar, Harrison, Bob Dylan, and others from the benefit concert Shankar inspired Harrison to organize Full Circle (2001), a live recording of a performance at Carnegie Hall with his daughter Anoushka Shankar, and an intimate collection of ragas titled The Living Room Sessions Part 1. In 1997 he received the Japan Art Association’s Praemium Imperiale prize for music. He was also awarded some of the highest honours by the government of India, namely the Bharat Ratna, Padma Vibhushan, Padma Bhushan, as well as the Sangeet Natak Akademi Award, and the Sangeet Natak Akademi Fellowship. Other honours include the Ramon Magsaysay Award, Commander of the Legion of Honour of France (2000), Honorary Knight Commander of the Order of the British Empire (KBE) for "services to music", Honorary member of the American Academy of Arts and Letters, and Honorary Doctor of Laws from the University Of Melbourne, Australia. He was also honoured with the Recording Academy’s lifetime achievement award.

Continuing to perform at concerts well into his 90s, he was frequently accompanied by Anoushka, who also specialised in fusing Indian and Western traditions. His daughter singer-songwriter Norah Jones is also known for her blend of jazz, pop, and country music, and is a winner of multiple Grammy awards.

In India, he served as a member of the Rajya Sabha, the upper chamber of the Parliament of India, from 12 May 1986 to 11 May 1992. He was nominated by the Indian Prime Minister Rajiv Gandhi. He also penned two autobiographies, published 30 years apart: My Life, My Music (1969) and Raga Mala (1999).

Pandit Ravi Shankar passed away on December 11, 2012, in San Diego, California, US. Among the many tributes to his greatness, Lata Mangeshkar summarised, “Panditji had a very rare talent. He was far more than a musician. When he played the sitar he conversed with the gods.” Ravi Shankar and the sitar are considered as extensions of each other, each entering into the other’s soul, and becoming a single entity.