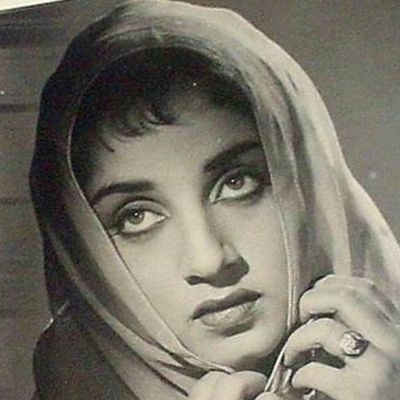 Indira Kaur, a charming and beautiful actress, was popularly known as Indira Billi. She was one of the most captivating heroines of Punjabi cinema. Unfortunately, this top actress of Punjabi Cinema was completely miscast in Hindi films as a vamp or nautch girl in many romantic, social, action, fantasy and mythological Hindi movies. Occasionally she would receive a substantial supporting role in films like Yahudi (1958), Do Dil (1965) and Mere Huzoor (1968), where she entranced Jeetendra.

Indira Billi was born in a Khatri family on August 6, 1936, in Dina Nagar (Gurdaspur district, Punjab). Her real name was Indira Kaur. She grew up in an aristocratic family of Kharian village (Gujrat district, now in Pakistan). Her family lost everything during the bloodbath of partition and after coming to India they settled as refugees in Kanpur. However, in 1952 her family shifted to Bombay where her elder brother ran a business.

The beautiful Indira was noticed by the popular comedian Bhagwan Dada while he was shooting a movie at Jagriti Studios. He was greatly impressed by her looks and decided to cast her in his film Rangeela (1953). Though her debut role was small she left a mark on the minds of the viewers. Raaj Kumar happened to visit the set of Rangeela (1953) and he was also caught by her captive beauty. Later Raj Kapoor cast Indira as the daughter of a rich industrialist in his film Shree 420 (1955). She starred as the second lead in the Hindi film Chakradhari (1954) and gave a memorable performance. Thereafter, she got many offers to act as supporting actress in Hindi films like Milap (1955), Funtoosh (1956),  and Dil Deke Dekho (1959), etc.

In 1960, she got the opportunity to be a heroine in a Punjabi film titled Yamla Jatt (1960). The main cast of this film included Indira Billi, Sunder, Kuldip Kaur, Tun Tun, Uma Dutt, Renu Makad, Cine Mala, Rani Sachdev, Dharam Pal, Swaran Dada, and new face Boota who played the title role of Yamla Jatt. Some of the songs picturized on her like Mera haal vekh ke, Lamma lamma baajre, Chichi wich pake chhalla, etc. became popular. The success of Yamla Jatt was followed by two blockbuster Punjabi movies Do Lacchian (1960) and Heer Syal (1960). In the musical hit Do Lachhian, Indira played the role of Chhoti Lachhi opposite the hero Daljeet. All the songs particularly those picturized on Indira Billi - Asan Kitti ae tere naal phoo, Ik pind do lachhiyan and Sari umran de pai gaye vichhode became immensely popular. Indira as the second heroine in the film Heer Syal stole the show. All these three Punjabi movies proved major hits raking in huge collections at the box office. Indira Billi became the top-ranking heroine of Punjabi cinema replacing the queen of Punjabi films Nishi Kohli from the throne.

Dara Singh’s Jagga (1964) was a dacoit movie with little scope of acting for Indira Billi. Even then she registered her presence with soulful song Takni aan teriyan raahwan. In Kikli (1964), she looked beautiful in the romantic duet Main aar chann ve. In Mama Ji (1964), she was in one of her best roles while crooning soulful songs Tera vichhoda zalima and Dhuppan vi udas ne. She was the only saving grace in the comedy movie Sat Saliyan (1964). Chambe Di Kali (1965) proved to be her best film. As a village damsel Chambi, Indira performed on the title song Mainu kehande ne chambe di kal. In 1965, Indira was in the role of Sassi in Sassi Punnu. B. N. Bali created melodious notes, which had the fragrance and flavor of Indo-Persian traditional music. The majority of the songs Dachi waleya mod muhar ve, Akhaan De Wich, Rab Rakha Saade Pyar were picturized on Indira to capture her enchanting beauty.

In the patriotic film Gabroo Desh Punjab De (1966), Indira gave a memorable performance as the newly wedded wife of a soldier who proceeded to the war front on his nuptial night. Indira was in the romantic role of Jeeto in Khed Preetan Di (1967). She brilliantly played the character of Channo, daughter of the vain Gainda Ram in Neem Hakim (1967). In Shehar Di Kudi (1968), she played the role of a modern and fashionable girl Sheila opposite Shiv Kumar. During the shooting of this film, Shiv Kumar and Indira fell in love, and soon they got married.

She was paired with Prem Chopra in Pardessan (1969) and performed the role of Nikki who fled from village to work in a city theatre. She was the first choice of film-makers, who invariably tried to exploit her elegant looks by making mill of the run movies. Joginder Samra was so fascinated by her beauty that he produced a film with the title Mukhra Chan Warga (1969). Indira’s Dupatta (1970) had melodies like Udd da dupatta, Ruk jaao sajjno, Main teri aan, Lakk patla, which were liked by music-lovers. Her next venture was Kully Yaar Di (1970), produced by B S Shaad who also shared the big screen as the hero. In 1971, Indira gave another super-hit film Kankan De Ohle (1971). She gave a mature performance in her last Punjabi film Patola (1973).

Sometimes billed as Indira Billi (her real name was Indira Kaur) she was interviewed in 1963 for PicturPost magazine where she talked about her beginnings: “I had not the good fortune of stepping into films and finding myself a heroine right from the start as had been the case with many glamour girls these days. It was a life of toil and tears, fighting every inch, every day, and month after month. Sometimes I was fed up, felt tired of the ceaseless struggle to make my presence felt. With the struggle for existence keen and with not enough money, those early days were none too happy for a girl aspiring for a respectable place in the film world, let alone stardom. Sometimes I had my misgivings whether I was right in coming into films. Some kind of inferiority complex took hold of me and I thought several times that I would never become a star.”

Indira Billi married a businessman who owned Kumar Talkies in the Chandni Chowk Business Plaza. After marriage, Indira Billi left the film world to fully devote herself to the family. These days she is leading a comfortable retired life with her children and grandchildren in Noida.