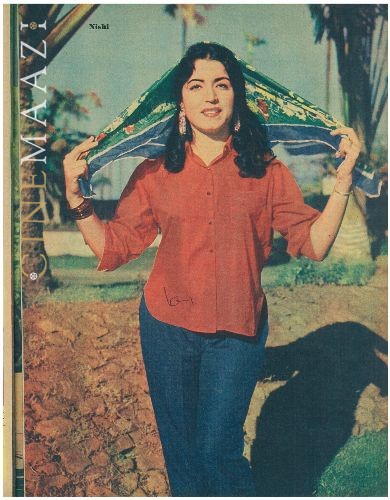 Beautiful, charming, and with a photogenic face, actress Nishi is known for her work in Phagun (1958), Lootera (1965), and Vallah Kya Baat Hai (1962). A big name in Punjabi cinema, she acted in many black and white Punjabi language films. She also enjoyed limited success in Hindi cinema, featuring in approximately 70 Hindi films. She played secondary roles in the 1950s and 1960s, mostly essaying negative roles in Hindi cinema, and positive roles in Punjabi films. Many of her films featured Dara Singh.

She was born Krishna Kumari Sharma on 1 January, 1935 in Sialkot, Punjab, British India. Post Partition, she moved to India along with her sister and mother. Her determination to succeed in life saw her attend school in the morning, and dedicate her evenings to typing classes. Her beauty saw her win acting offers in films and she went on to join the film industry.

However, the journey wasn’t easy. Her debut Hindi film Pagal Khana, shot around 1955 did not get released. However, she went on to do many other films like Railway Platform (1955), Miss India (1957), Phagun (1958), Chaalbaaz (1958) and so on. Most of these films featured her in supporting roles. Though she did get to play leading roles in a few small costume drama action films, they were not significant productions. She did films on her own terms, never going out of her way to bag roles in big productions. While she was ambitious, she achieved success on her own strength.

Her debut in Punjabi films came via filmmaker Jugal Kishore whom she had worked with in a Hindi film. She starred in his Punjabi language film Bhangra (1959), which became a huge success. The film established her as a major star of Punjabi cinema. She went on to feature in several Punjabi productions including Jija Ji (1961), Guddi (1961), Main Jatti Punjab Di (1964), Banto (1962), Satluj De Kande (1964), Laajo (1963), Dulla Bhatti (1966), and Pind Di Kudi (1963). Her stardom boosted the fortunes of several films.

Nishi formed a successful pair with Dara Singh in his stunt action films. Together they delivered hits like Hercules (1964), Baadshah (1964), Ek Tha Alibaba (1963) and the Punjabi film Dulla Bhatti (1966). However, success didn’t come easy. In the Hindi film industry she faced competition from Mumtaz and Helen, while in Punjabi cinema, her contemporary Indira Billi contested for the same space. To her credit, Nishi managed to hold her own in both the film industries with grace.

She was also one of the first leading ladies of Dharmendra, and also worked with most of the leading actors such as Ashok Kumar, Balraj Sahni, Raj Kapoor, and Shammi Kapoor. Her film opposite Ashok Kumar – Dark Street (1961) was one of her most important films as a lead actress. The story revolved around two girls who look alike but have completely differing ideologies. Unfortunately, the film did not fare well at the box office. In the Jyoti Swaroop directorial Bin Badal Barsaat (1963) she managed to steal the show from Asha Parekh, even though she featured in a negative role. Perhaps her career-best performance in Hindi cinema came in Pyar Ki Pyas (1961). A family drama, it also featured Daisy Irani, Manorama and others and was directed by Mahesh Kaul.

Nishi had worked with Rajkumar Kohli in films such as Sapni (1963) and Dulla Bhatti. Their professional collaboration was a success. They went on to marry, post which she decided to quit acting, though she was still in demand as an actress at the time. Among her last Hindi films was Ganwaar (1970) in which she was cast along with Rajendra Kumar and Vyjayanthimala. Her last film in Punjabi was the religious film Nanak Naam Jahaz Hai which released in 1969. Incidentally, she often played negative roles in Hindi films, while in Punjabi cinema she was cast in positive roles. However, in the Punjabi film Nanak Naam Jahaz Hai she played the antagonist, winning equal appreciation for her performance. The film was to be an ideal swansong for Nishi.

While she no longer accepted acting offers, she continued to be involved with the industry via her husband Rajkumar Kohli. She took a keen interest in his film productions, attending story sessions and also assisting the writers. During shoots, she would take care of the unit, and was also known to groom the actresses of the films of their production house. Nishi and her husband produced several hit multi-starrers such as Nagin (1976) and Jaani Dushman (1979), which are considered cult classics, They also produced other successful and popular films such as Gora Aur Kala (1972), Naukar Biwi Ka (1983), Jeene Nahi Doonga (1984), Insaniyat Ke Dushman (1987), Badle Ki Aag (1982), Virodhi (1992), Bees Saal Baad (1989), Qahar (1997) and many more.

She continued to get offers for acting parts but politely refused them all. She even declined the role Mira Nair had offered her in Monsoon Wedding (2001). Once that chapter of her life was closed, she simply couldn’t be wooed back. The fact that her younger son, Rajneesh Kohli was a special child and in need of constant care, could have been another reason why she never returned to the arclights.

She would make public appearances at event launches or the premieres of films produced by the family-owned production house. While she attended the prayer meet of her one-time co-star the late Dara Singh, she was also present at the poster launch of her classic film Nanak Naam Jahaz Hai’s re-release in 2015. Post the screening of Rajshri’s Prem Ratan Dhan Payo (2015), which featured her son Armaan Kohli in the leading negative role, she also danced to the title song of the film.

Popular in Punjabi cinema for over a decade with many classic films and songs to her credit, she was bestowed an award by the Punjab Government for her contribution to Punjabi cinema.