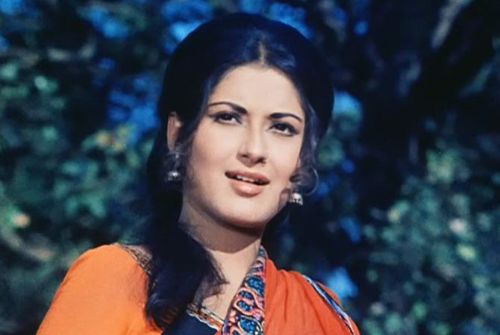 When Tarun Majumdar, the famed Bengali director was looking to cast actors for his film Balika Badhu (1967), he was convinced that only the young Indira living close to his house would do justice to the titular role. Though her father was initially reluctant to allow this, Majumdar managed to convince him, and the very young Indira found herself cast in the film. At the mere age of ten or eleven, Indira Chattopadhyay thus became Moushumi Chatterjee. The resounding success of Balika Badhu ensured that she soon became a regular in Bengali films. Between 1967 and 1972, Moushumi Chatterjee worked in several Bengali films such as Parineeta (1969) and Anindita (1972).

While Indira may have wished to continue her studies, destiny had other plans. Her ailing aunt battling cancer wished for Indira to be married before her death. A marriage proposal came in from Babu Mukherjee, neighbor and legendary singer Hemant Kumar Mukherjee’s son. Indira was married to him, and she moved to Mumbai.

In Mumbai, Moushumi Chatterjee made her Hindi film debut in Shakti Samanta’s Anuraag (1972) as a visually challenged girl. With this she began a fairly successful career, establishing herself as a natural and charming actress in movies like Roti Kapada Aur Makaan (1974), Angoor (1982), Zehreela Insaan (1974) and Swayamvar (1980). Moushumi took care to balance her family life with her work, and took frequent breaks to give birth and take care of her two daughters. Despite this, she had a long stint in Hindi and Bengali films.

After playing the leading lady for a decade opposite leading actors of the seventies such as Amitabh Bachchan – Benaam (1974), Manzil (1979);Rajesh Khanna – Humshakal (1974); Vinod Khanna – Kuchhe Dhaage (1973) and Sanjeev Kumar – Angoor(1982), Moushumi Chatterjee transitioned to playing supporting characters like that of the mother or sister in the late eighties. Her most frequent pairing in Hindi cinema was with her first co-star Vinod Mehra, with whom she has starred in more than ten films.

Moushumi has continued to act, sporadically though, charming audiences in many wonderful films in the 2000s and the second decade of the twentieth century. Some notable mentions in the latter half of her career include Aa Ab Laut Chalen (1999), Bollywood Hollywood (2002), The Japanese Wife (2010), Goynar Baksho (2013) and Piku(2015). Her continued appearance onscreen is also a matter of choice and deliberation: she rejects several big-budget films because often the roles offer her nothing to do. At present, Moushumi Chatterjee is known for her long career in the worlds of Hindi and Bengali cinema, as well as her foray into politics 2014 onwards.