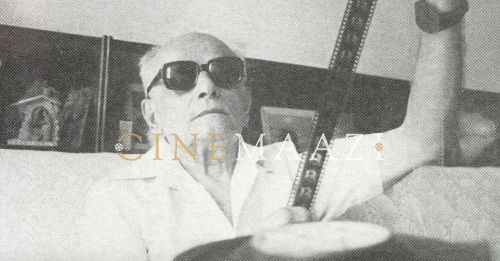 The Hindi B movie remains one of the most unique incarnations of genre cinema with its special-effects heavy spectacles and often bizarre and transgressive themes. While scoffed at by elite audiences, it left an everlasting effect on modern day action cinema and has accumulated a significant cult following. One of the figures who helped define the genre, especially in the post-Second World War period was the Hindi-Gujarati film director Nanabhai Bhatt.

Nanabhai Bhatt was born as Yeshwant Bhatt in Porbandar, Gujarat on 12 June, 1915. He first joined the film industry as a sound recordist at Prakash Pictures, under his elder brother Balwant Bhatt. He also wrote scripts under the pseudonym Batuk Bhatt. By 1941, he had become the chief sound recordist. He soon left Prakash Pictures and joined Wadia Movietone along with another B movie luminary, Babubhai Mistry. He co-directed two films witth Babubhai Mistry – Muqabala (1942) and Mauj (1943), under the name of Batuk Bhatt. He directed two more films as Batuk Bhatt, Homi Wadia's Hunterwali Ki Beti (1943) and Liberty Pictures Sudhar (1949).

His first film Muqabala (1942) remains an influential classic in B movie history. Nadia forsook her Zorro persona to play a double role in the film. The film is known for the trick photography of Babubhai Mistry – which allowed for the twins to be shown in the same frame. His collaboration with Babubhai Mistry produced other great special effects moments – like the fight scene between two invisible swordsmen in Sinbad the Sailor. There was the innovative nightclub set which could be transformed with a network of pulleys into a residence. Nanabhai also worked with Dara Singh, the most well-known of the stunt film actors and cast him in his Samson (1964) and Shankar Khan (1967).

Nanabhai had a colourful career replete with stories like paying the chimp Pedro from Zimbo Comes To Town Rs. 40,000 per film and 20 Coca Cola bottles per day and counting him as a friend. He remained active in cinema until his vision started to fail because of glaucoma. The Gujarati film Gajara Maru was his last film. But his vivacious imagination still led him to make suggestions and supply story ideas for his sons Mahesh, Mukesh and Robin Bhatt. He passed away on 24 April, 1999, leaving behind a body of vast and influential work.