BEKHABAR means ignorant - and every criminal in power thinks that the law is Bekhabar or ignorant of his misleeds.

One such criminal was Dharamdas, who had a long record of crimes. Police knew it but did not have any proof or clue to took him.

In this multi-checkered world, Madhvi a dancer in Mansarovar Hotel, had two comforts in life. ONE she earned and lived for her younger brother Munna and SECOND her affection for the hotel manager Puri, who was no less than godfather to her.

In one such attempt Madhvi is rescued by Ashok. Madhvi and Ashok come nearer and nearer and fall in love.

They move together to Calcutta. There too she is followed by Dharamdas and his men and at last Madhvi is kidnapped. Dharamdas is lured by her beauty and makes advances towards her but Madhvi, using her presence of mind runs away... but from FIRE to FRYING PAN.

Madhvi falls in the hands of Pyare - a truck driver. He tries to seduce her but her appeals remind him of his sister who got lost during the inhuman riots of partition. Pyare accepts Madhvi as his sister and leaves her safely in the hands of Ashok.

But Madhvi is not happy for long...she finds a photograph of the KILLER Dharamdas in the diary of Ashok. Madhvi now realises that all the time she had been right in the hands of the KILLER and his associates. She tries to escape but Ashok locks her in a room.

Meanwhile Dharamdas makes another move and kidnaps Munna. He informs Madhvi by telephone about Munna and asks her to come over if she loves Munna. Madhvi becomes desperate and manages to escape from Ashok's house.

Pyare is bribed with drinks and the gangsters take Madhvi in his truck.

Now Madhvi and Munna are in the hands of the KILLER Dharamdas.

Ashok who is out in search of Madhvi, meets Pyare and tells him of her escape. Pyare now realises that he himself had taken her in the truck and delivered her in the hands of the KILLER. Both go out to the place where Pyare had left Madhvi and the gangsters.

Did Ashok and Pyare rescue Madhvi and Munna?

What was the fate of Dharamdas the KILLER??

To get an answer to these questions SEE BINA CHITRA'S 'BEKHABAR' 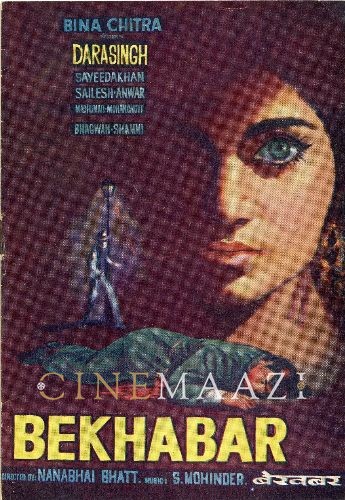