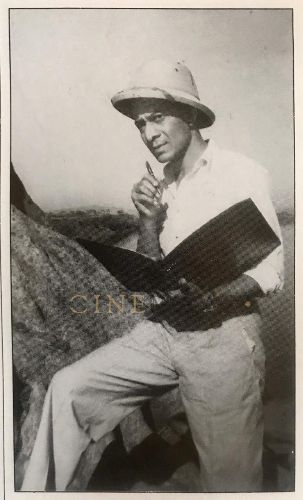 An actor, director, producer and a vocalist, Raja Paranjape was the complete film personality. As a filmmaker, his vision and skills helped cinema make valuable strides. The hallmark of his films was that they were ahead of their times, and were not restricted by language but could communicate and connect with audiences via their humanism.
Born Rajabhau Dattatraya Paranjpe on 20 April, 1910 in Miraj, he spent his early years in Pune. His interest in theatre and music became evident at a young age. Studying at the Perugate Bhave School, his first stage performance was in a school play, Vishva Vaichitrya. The 20s and 30s were heady times for Marathi theatre, even as the silent films ruled the era. Raja could not acquiesce with his father’s wishes to join the family business and instead struck out to find his own path. A keen harmonium player, he started a harmonium training school. where he was to meet his life partner Tara. Forming contacts with the world of cinema, he found employment with Aryan theatre in Pune, playing live music to accompany the screening of silent films. He went on to join the theatre group Natyamanvantar in the music department but soon received the opportunity to act onstage. After the theatre company shut down, he went on to assist Marathi film doyen Bhalji Pendharkar in filmmaking. It was the start of great things.
In the course of his career, he went on to act in a slew of Marathi and Hindi films such as Kanhopatra (1937), Pratibha Manduk (1937), Manoos (1939), Soonbai (1942), Sasurvas (1946), Lakhachi Gosht (1952), Pedgaonche Shahane (1952), Raag Rang (1952), Chacha Chowdhury (1953), Een Meen Sadeteen (1954), Oon Paoos (1954), Jagachya Pathivar (1960), Hach Sunbaicha Bhau (1960), Baiko Maheri Jaate (1963), Bandini (1963), Ha Majha Marg Ekla (1963), Aadhar (1969), Jal Bin Machhli Nritya Bin Bijli (1971), Piya Ka Ghar (1972), Varhadi Aani Vajantri (1973) and Us-Paar (1974). As a performer, he had the ability to elicit smiles without resorting to slapstick comedy, and effortlessly could move audiences to tears without the need for glycerine. Dubbed the Chaplin of Marathi cinema, his portrayals blended comic situations with pathos. His performances in character and supporting actor roles displayed his skill as an artiste, as well as his wealth of experience.
As a director Raja Paranjape made significant contributions to the development of cinema and the Marathi film industry. Many of his films have helped define Marathi cinema, combining his compelling vision and ground-breaking style. In fact, the personal stamp he left on his projects led to the coining of the phrase—the Raja Paranjape style. He had a key sense of comic characterisation and presentation, and was precise in his direction of his actors, often enacting the scenes out for them. As a director, he had an instinct for adding an element of naturalness to scenes, while he maintained a sharp grip over the editing of his films, as well as the music which encompassed seamlessly embedded songs, both of which combined to take the story forward engagingly. He was of the belief that a filmmaker must have all-round knowledge, as directing a film is a very difficult task. Unless the director knows at least a little from every department of filmmaking, he cannot attain success, was the dictum he lived by. Crafting cinema that was socially relevant, his films depicted the lifestyle, hopes, aspirations, dreams and fears of the times. Known for not repeating themes, he also developed a reputation for handling suspense stories that ventured into psychological territory that no other filmmaker had before.
Raja Paranjape’s work won several honours such as Suvasini (1961) which bagged Best film, Second Prize, Maharashtra State Marathi Film Festival, 1962-63; Ha Maza Maarg Ekala (1963) which won the President’s Silver medal for the Best Marathi film, National Film Festival 1964, as well as the Best film, Second Prize, Maharashtra State Marathi Film Festival, 1963-1964; Pathlaag (1964) which won the President’s Silver medal for the Best Marathi film, National Film Festival 1965, as well as the Best film (combined), First Prize (combined), Maharashtra State Marathi Film Festival, 1964 – 1965; and Kaka Mala Vaachava (1967) which was adjudged Best Film, Second prize, State Marathi Film Festival, 1967-1968. Winner of Best Artist in the State by H.E. Governor, Shri. Sadik Ali, Maharashtra State, 1977-1978, and felicitated by Bharat Natya Mandir for the Government Honour, 1977-1978, he was also a member of Indian delegation to China in 1955, which included other stalwarts such as Prithviraj Kapoor, Bimal Roy, Chetan Anand, Kamini Kaushal, and Balraj Sahni.
Raja Paranjape passed away on 9 February, 1979 in Pune.