Who is ignorant of Bajrant Bali being the great devotee and inimitable servant of Shree Ram who is worshipped under different names all over the country and abroad? Who is unaware that he is respected as the might of the weaklings, deity of the wrestlers and a great saviour of mankind?

In childhood Bajrant Bali had devoured the Sun mistaking it as a fruit, and by this only one kick he broughRahu at his feet! When Indra attacked this child by his thunderbolt, mother Anjani and father the mighty Wind burst into fury, and terrorized deities shielded the Son of Wind turning him 'Vajrang' the unpenetratable, whereafter he is known as Bajrang.

Bajrang learnt all the Vedas from Sun, keeping himself in pace with his speed, and by Gurudev's orders brought Moon, Mars and Saturn under his command by crushing 'Sadhe Sati' beneath his feet. Due to this Bajrang Bali is worshipped on Saturdays and Tuesdays by the people seeking relief from the evil effects.

When Baali abdicated Sugreev from the Kingdom, Bajrang Bali left for Kishkindha at the command of mother Anjani to the rescue of Sugreev. On his way, by the blessings of Lord Shiva, he heard the divine sound of 'Ram' in each and every particle of nature which invoked in him the devotion towards Ram.

By unitingSugreev and Ram in the ties of friendship and by successfully searching out Seeta, Bajrang Bali gave ample proof of his genius as well as irreprissible daring.

Trust, piety, nobility, self-control, affection, nursing and sweet tongue are the seven essentialities required in a servant, which rare qualities are found embodied only in Bajrang Bali, examplerity which could be seen in the tremendous zeal by which he brought 'Sanjeevni' when Lakshman go seriously unconscious.

In the brimfull court of AyodhyaBajrang Bali procured amazing proof that his every fibre was palpating with the divine sound of Shree Ram, by tearing of his chest, holding the on lookers spellbound.

When Lakshman, Bharat and Shatrughan in partnership with Seeta share away between themselves their service to Ram, sparing nothing for Bajrang, he tactfully picks up the service of finger-twisting (chutki) at the yawning, and defeating all he wins away all right-of service to Ram!

Bajrang is entreated to dinner by Seeta who falls flat at the nonstop eating away o all the dishes of sweets by Bajrang, when at the advice of Ram, only a small leaf of Tulsi is catered to him and to ! the hunger of Bajrang miraculously quenched!... The deity and the devotee both are satisfied by the wonder-land of Tulsi !

Bajrang was so much affiliated to his pledge and duty that for maintaining his duty towards his master he waged a war against even Ram, his Master providing the might of the name of Shri Ram greater than even am himself. Such a stubborn Bajrang had to surrender before the small kinds Lav and Kush, as he respected Master's sons also as his masters!

Andwhat a flower-delicate heart this steel-bodied Bajrang possessed could be witnessed only in his uncontrolled lamentation at Seeta's going back in the lap of Mother earth.

On the occasion of Ram's winding away his incarnation, Bajrang Bali's observation of his devotional service to the Master again gets most pathetically boundless, but aware of the necessity of a devotee like Bajrang to continue in the world of lighting the darkness of human hearts and souls Ram consoles him: "Oh Bajrang! thesaviour of Ram in all his trials and tribulations, he shall remain on Earth Visually and spiritually to dissolve the difficulties of mankind, as long as Ram's glory inspires the world and accordance with this blessing BajranjgBali is worshipped through the ages in all the comers and every home. 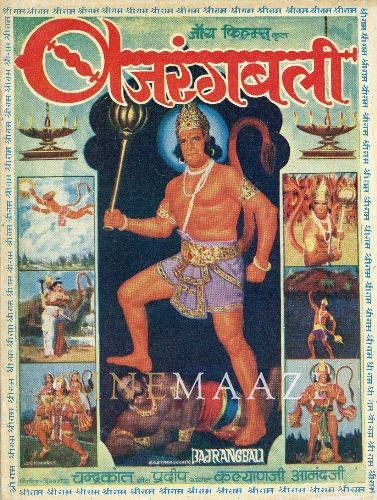