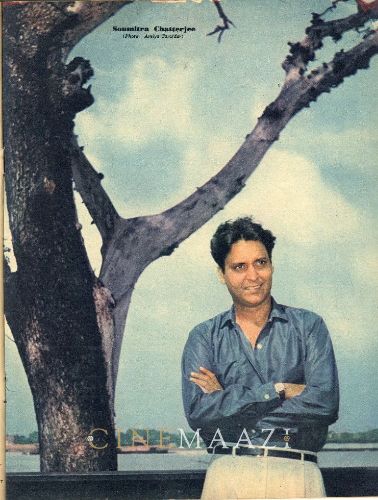 An iconic movie star, the legendary acting stalwart Soumitra Chatterjee was also an accomplished playwright, theatre actor, poet and painter; an integral part of the Bengali cultural psyche itself. His oeuvre comprised many different films—approximately 300 of them through the course of his six-decade-long career in Bengali language films. He was perhaps best known for his work with the internationally acclaimed filmmaker Satyajit Ray. Making his debut in Ray’s celebrated Apu Trilogy; namely, in the third instalment Apur Sansar (1959), he essayed the beautiful, romantic man-child Apu who looked at the world with wide-eyed wonder in spite of life’s vicissitudes. He went on to feature in no less than 14 films by the great auteur. It is no surprise that Chatterjee was thus favoured; respected film critic Pauline Kael described him as a ‘one-man stock company, who was almost unrecognisable as he moved so differently amongst the varied roles he played.' He played a staggering variety of roles across romantic comedies, social dramas, crime thrillers, political films, biopics, and period pieces, making each character distinctly his own. He is particularly known for his work on The World of Apu (1959), Kony (1984) and Abhijan (1962). Film critic and biographer Marie Seton was to write that Chatterjee’s chief asset as an actor was the natural sensitivity of his appearance. Amitava Nag, author of Chatterjee’s biography, dubbed him “the thinking man's hero." He was an intellectual and a poet. He defined all that was beautiful and enduring in Bengali society, culture and tradition. Among the honours showered on him was the Dada Saheb Phalke Award, the highest honour in Indian cinema, in 2012, as well as France's highest award, the Legion of Honour, in 2018.

He was born on 19 January, 1935 in Mirjapur Street, now known as Surya Sen Street, near Sealdah Railway Station in Kolkata. His father, a lawyer by profession, was an enthusiastic amateur actor and introduced Soumitra to the stage while he was still a child. He began acting while in school, starring in several plays. A student of Bengali literature, he went on to graduate from the City College in Kolkata with an Honours degree. He was in college when he was introduced to Satyajit Ray by a friend; a chance meeting that eventually led to him being signed on by the auteur for his film debut. Later he would candidly reveal to film critic and biographer Marie Seton that when he was approached by Ray, he didn't know the real difference between stage and screen acting, and was afraid he would overact. He spent several years in Kolkata, in Satyajit Ray’s old apartment. As he studied for his Master’s in Bengali from the University of Calcutta, he also picked up the nuances of acting from well-known Bengali theatre actor-director Ahindra Choudhury. Watching a play by Sisir Bhaduri in his final year of college crystallised his desire to become an actor. Considering Bhaduri as his mentor, he also appeared in a small role in one of his productions. Incidentally, at 20 when he auditioned for the title role in Kartik Chattopadhyay’s Bengali film Nilachale Mahaprabhu (1957), he was rejected.

In 1959, Chatterjee made his debut with the Satyajit Ray film Apur Sansar. He went on to work in several other notable films with Ray, including Abhijan (1962), Charulata (1964), Aranyer Din Ratri (1969), Ashani Sanket (1973), Sonar Kella (1974), Joi Baba Felunath (1978) as the celebrated detective Feluda, Hirak Rajar Deshe (1980), Ghare Baire (1984), Shakha Proshakha (1990) and Ganashatru (1989). His roles in Ray’s films spanned a wide range, from essaying a Sherlock Holmes-like detective in Sonar Kella, to an effete bridegroom in Devi (1960), and a bad-tempered north Indian taxi driver in Abhijan. If he was a city slicker in Aranyer Din Ratri, he was a mild-mannered village priest in Ashani Sanket. In Charulata, he played what is considered a thinly veiled portrait of Nobel prize-winning poet Rabindranath Tagore. Ray gave him much freedom to interpret a role. It was a collaboration that captured world cinema, and kept audiences across the globe enthralled over the decades. The sheer range of characters he essayed and made immortal is perhaps unprecedented in the history of Indian cinema. What’s more, he was as magnificent in commercial films as he was in parallel cinema. Mentored by Ray, the latter lent him books on cinema, and often took him to watch Sunday morning shows of Hollywood films in Kolkata, with the purpose of expanding his mind. Post Ray’s demise in 1992, Chatterjee revealed that not a day went by without him thinking of Ray, who was a constant presence and inspiration in his life.

In the course of his career, Chatterjee also played the romantic lead in popular Bengali films. However, his appeal in this genre was limited in comparison to the superstar of the times, Uttam Kumar. Interestingly, in the Tapan Sinha 1961 film Jhinder Bandhi which starred both Kumar and Chatterjee, the latter virtually stole the show as the charismatic villain Mayurbhan; something that was considered unconceivable in a film starring the leading star of Bengali cinema in a double role, at that. More importantly, he introduced a new authenticity and vulnerability in his performances that the audience could identify with and also look up to.

Considered one of Ray’s favourites and celebrated as the director’s actor, Chatterjee nevertheless also worked with other leading directors such as Tapan Sinha, Mrinal Sen, Asit Sen, Ajoy Kar, Rituparno Ghosh and Aparna Sen. Soumitra himself often acknowledged the huge impact Tapan Sinha had on his career, for if Ray moulded his attitude towards art, cinema and life itself, Sinha helped immensely in honing his craft. As he himself had revealed, in his first film with Sinha (Khudito Pashan, 1960), the latter literally taught him how to walk in front of a camera. His portrayal of a man haunted by the ghost of his beloved from a previous birth is one of his early impactful roles. Even in his later films with Sinha, he credited the filmmaker with subtly opening his eyes to certain things.

Chatterjee kept re-inventing himself over the years, via his roles. As a young actor, he had never allowed himself to get typecast; as he aged, his scope of roles only further increased. A consummate actor, even in his 80s he showed he could single-handedly carry a film by his own charisma. His very presence could redeem a mediocre film, and render it watchable. In 1988, he worked with John Hurt and Hugh Grant in The Bengali Night, a film set in Kolkata. He chillingly played the lead role in Sujoy Ghosh’s short film Ahalya (2015) co-starring Radhika Apte and Tota Roy Chowdhury, also featuring in two more short films, Baalir Niche Jawler Shabda directed by Nilabja Das and The Forlorn directed by Saptaswa Basu.

Interestingly, despite his enormous popularity, Chatterjee preferred to stay away from the Hindi film industry, choosing to focus only on Bengali language films. He himself believed that an actor excels in most cases in his mother tongue, which allows him to manipulate the language to the best of his abilities, and go deep into the nuances. He considered his mastery over Bengali as the basis of his strength as an actor. Occasionally, in a lighter vein, he would also explain his reluctance to venture outside of Bengali cinema as being due to his youth, naiveté, and ignorance of the value of money! As poet, journalist and filmmaker Pritiish Nandy pointed out in 2012, “Soumitra is the finest actor in the land today, but totally unheard of outside Bengal. It's a loss for India, Bollywood and I guess, a bit for Soumitra.”

Chatterjee’s creativity was more than evident outside the realm of films as well. He painted, edited a literary magazine, published more than 30 books of essays and poetry, and acted, directed and wrote an equal number of plays. The comedy Ghatak Bidey, one of his most successful plays, ran for 500 nights. He is also memorable for one of his finest performances on stage wherein he acted in a commercially successful Bengali adaption of King Lear. Among his many published works are Sreshṭha Kabita – a collection of poems published in 1993 in Bengali, Manik Dar Songe - the personal and heartfelt story of Chatterjee’s journey with his mentor Satyajit Ray, and Porichoy - written in an autobiographical style and depicting his cinematic as well as a personal journey.

On account of his collaborations with world cinema stalwarts such as Satyajit Ray and Mrinal Sen, Soumitra Chatterjee could be considered as India’s biggest international star. Awarded the Dadasaheb Phalke Award, the highest award in Indian cinema in 2012, he was conferred the prestigious Officier de la Legion d’Honneur (Officer of the Legion of Honour) in 2017, followed by the the Ordre des Arts et des Lettres, France’s highest award for artists, in 2018. He was the first Indian actor to be conferred this honour. Strangely, he never won a National Award for Best Actor until 2006 (for Padakhep). He never received a single National Award for his roles in the films of Ray, Mrinal Sen and Tapan Sinha.

Dubbed “the greatest actor of his time in India” by acclaimed filmmaker Buddhadeb Dasgupta, the 85-year-old Soumitra Chatterjee passed away on 15 November, 2020 post complications arising after testing positive for coronavirus. He was survived by his wife Deepa, daughter Poulomi Bose, who is a well-known theatre actress, and son Sougata.