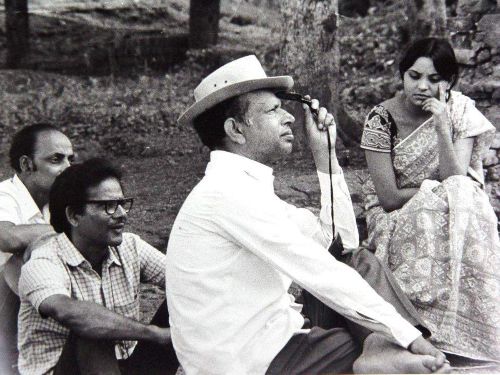 One of the greatest Bengali filmmakers of all time, Tapan Sinha was one of the few who successfully bridged the gap between commercial and art cinema. While he is widely regarded as one of the finest exponents of middle cinema, many of his films also contained striking socio-political critiques.

Tapan Sinha was born on 2 October, 1924 in Calcutta. While in the fifth standard he was transferred to Durgacharan M.E. School in Bhagalpur, Bihar where his family owned a large amount of land. His Principal at the school Surendranath Gangopadhyay, who was Sarat Chandra Chattopadhyay’s maternal uncle. He went on to study physics at the University of Patna, before graduating from Calcutta University. His first brush with cinema came when he joined New Theatres as a sound engineer in 1945. He got to observe masters like Nitin Bose and Bimal Roy at work there. His debuted in cinema as a sound engineer for Satyen Bose‘s Paribartan (1949).

In the 1950s he travelled to London and contacted the manager of Pinewood Studios. Through this avenue, he received an opportunity to work with Charles Cryton as a sound engineer. He had been an aficionado of the works of John Ford, Carol Reed and Billy Wilder.

He made his directorial with the Narayan Ganguly adaptation Ankush (1954). Upahar (1955) was based on Sailajananda Mukherjee’s Krishna and starred Uttam Kumar, Sabitri Chatterjee, Chhabi Biswas and Manju Dey. His next film, Kabuliwala (1956), an adaptation of Rabindranath Tagore’s short story, got him widespread acclaim, including the National Award for Best Feature Film and the Silver Bear at the Berlin International Film Festival. Subsequently, he made films like Louha-Kapat (1957), Kalamati (1958) and Kshaniker Atithi (1959). Loha-Kapat won the National Award for Best Feature Film in Bengali. Kalamati addressed the issues of life in coal-mining areas. Kshudita Pashan (1960), another Tagore adaptation, comprised of evocative imagery and fantastic metaphors, won more acclaim as well as the National Award for Second Best Feature Film. Jhinder Bandi (1961) brought Uttam Kumar and Soumitra Chatterjee together for the first time (as well as Chatterjee’s first villainous role) and was based on Saradindu Bandopadhyay’s story which was loosely based on The Prisoner of Zenda. Hansuli Banker Upakatha (1962) was set during the Second World War and concerned with feudal oppression and the impact of the war on the Bengal countryside. It won a Jury Award at the San Francisco Film Festival. Nirjan Saikate (1963), based on a story by Samaresh Basu, narrated the stories of five widows. Arohi(1964) won the Silver Leopard at the Locarno Film Festival.

Jotugriha (1964) starring Uttam Kumar and Arundhati Devi is often termed as Sinha’s best film. It is an early precursor to middle cinema and influenced the films made by Basu Bhattacharya in the 70s. Three highly acclaimed films followed – Atithi(1965), Galpa Holeo Satti(1966) and Hatey Bazarey (1967). Atithi won him his fifth National Award. The satirical Galpa Holeo Satti was later remade by Hrishikesh Mukherjee as Bawarchi (1972). Hatey Bazarey starred Ashok Kumar and Vyjayanthimala and won the National Award for Best Feature Film. It was also one of the most commercially successful films of its time.

Apanjan (1968) was an important film, as it differed in tone from his other films. Based on the Naxalite movement, it was a bitterly violent melodrama that proved to be the inspiration for Gulzar’s Mere Apne(1971). Sagina Mahato (1970) starred Dilip Kumar, was framed as an allegory of Bengal in the 70s. He made the Hindi language Zindagi Zindagi (1972) with Sunil Dutt, Waheeda Rehman and Ashok Kumar. He won the National Award for Best Screenplay for the film Ekhonee (1971). His other films in the 70s include Andhar Periye (1973), Sagina (1974), Harmonium (1976), Safed Haathi (1978), the children’s film Sabuj Dwiper Raja (1979) and the fairy-tale based Banchharamer Bagan (1980) which featured an excellent performance from Manoj Mitra.

Adalat O Ekti Meye (1981) starred Tanuja in a courtroom drama, addressing the issues that rape victims face from society. He made the television drama Admi Aur Aurat (1984) for Doordarshan. He made another Hindi film with Aaj Ka Robin Hood (1987) starring Nana Patekar, Utpal Dutt and Anil Chatterjee. Ek Doctor Ki Maut (1990) was an acclaimed drama based on the story Abhimanyu by Ramapada Chowdhury. It won him the Best Director prize at the National Awards. The film concerned the ostracisation of a talented scientist due to the professional jealousy and bureaucratic misuse of power. Among his last few films, a notable one was Wheel Chair(1994), which spoke of the trauma suffered by victims of sexual abuse. He also made the fantasy Ajab Gayer Ajab Katha (1998), Anokha Moti (2000), Daughters of This Century (2001) and Gandharbi (2002), where he was the music composer.

He was married to fellow filmmaker and actress Arundhati Devi. He passed away on 15 January, 2009 after suffering from pneumonia and septicaemia.

Known for his sensitive treatment of characters, his films often used symbolic imagery to make their socio-political critiques. A number of honours were conferred upon him such as the Padma Shri in 1992 and the Dadashaheb Phalke Award in 2006. A hospital was named after him in Kolkata in 2010. Raja Sen made a documentary on him called Filmmaker For Freedom.