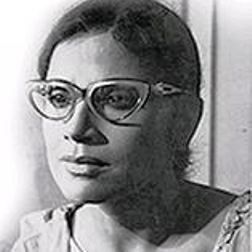 Honoured with the Padma Shri by the Government of India, the Sangeet Natak Akademi Award for theatre acting, and the Kalidas Samman by the Madhya Pradesh Government, Tripti Mitra was an icon of Bengali theatre and films.

Born Tripti Bhaduri in Dinajpur on 25 October, 1925 to Shailabala Debi and Ashutosh Bhaduri, she studied at the Dinajpur Minor School followed by Calcutta’s Pyaricharan School. Actively performing on stage since her teens, Tripti first acted in her cousin Bijon Bhattacharya's play Agun (Fire) in 1943. Noticed by eminent theatre personalities in the play, she became a member of the Indian People’s Theatre Association (IPTA). She went on to act in its productions of Bhattacharya’s Jabanbandi and Nabanna. When filmmaker Khwaja Ahmad Abbas watched her performance onstage in the groundbreaking IPTA play, Nabanna (Harvest), which was based on the Bengal famine of 1943, he offered her the chance to come to Bombay to work in Gana Natya Sangha’s film Dharti Ke Lal (1946), partly based on the play. Tripti made her debut in Bengali cinema with Pathik (1953), directed by Debaki Kumar Basu. Her filmography includes Gopinath (1948), Bodhodoy (Short) (1951), Moyla Kagaj (1954), Rickshaw-Wala (1955), Joy Maa Kali Boarding (1955), Asha (1956), Jago Hua Savera (1957), Shubha Bibaha (1959), Manik (1961), Suryasnan (1962), Kanchanranga (1964), Seba (1967), and Charankabi Mukunda Das (1968). She also featured in Ritwik Ghatak's last film, Jukti Takko Aar Gappo (1974). Tripti Mitra also acted in Jago Hua Savera (1959), an Urdu film produced in Dhaka, East Pakistan (now Bangladesh). It was based on Manik Bandopadhyay's classic novel Padma Nadir Majhi.

In 1948, Tripti Mitra along with her husband Shombhu Mitra, along with some others, broke away from IPTA, as they felt the creative atmosphere was being increasingly constricted. They founded their own theatre group, called Bahurupi. Acting in several plays Tripti became a famous actress of the Bengali stage. Among the plays she featured in are Jabanbandi, Putul Khela, Gopinath, Ulukhagra, Chaar Adhyay which was based on Rabindranath Tagore's novella of the same name, Tagore’s Rakta Karabi, and Raja, Baki Itihaas, Daakghor (she produced and directed Tagore's play The Post Office), Sutorang, Aparajita, and Visarjan. Her performance as Nandini, protagonist of Rabindranath Tagore's Rakta Karabi, brought her most acclaim. Her performances as Ela in Char Adhyay was also appreciated. While Daakghor was her first directorial, she also directed Kingbadanti and Aparajita. Her performances were praised for being realistic and moving. She was known for her immense dedication to the craft and the ability to immerse herself completely in the role. She was also well known for her solo-theatrical pieces. Though often her career is conflated with her husband's, her achievements stand on their own and inspire generations of young theatre actors.

On the personal front, Tripti Mitra married Sombhu Mitra in 1945. The couple had a daughter, Shaoli Mitra, who is also an actress and director.