When famine comes, it is a cruel wind that blows human beings like autumn leaves.

Thus it was that a young widow, desperately anxious to save her child from starvation, left it on the door-steps of an orphanage.

Munna grew in the orphanage-a pale diffident, shy, but handsome little boy. When Seth Chiranjilal and his Sethani, a childless couple, came to the orphanage to adopt a boy, they selected Munna. But Munna's parentage was unknown-no one knew to what creed or caste he belonged by birth. So they refused to take him and left Munna with a disturbing question mark in his mind.

"I must find my mother" thought Munna and ran away from the orphanage in the dead of night.

He came to Mumbai and on the step of a temple, encountered the mother, his own mother, but due to the irony of fate, neither of them could recognize each other.

He fell in the hands of BHIKU, a goonda who would have murdered him for the little gold trinket round his neck, but the innocence of the child was stronger than the evil in the goonda's cruel heart. Again he met mother at the construction works, where she was workign and she, remembering that her own son. too, would be of the same age, took Munna to her hut and fed him-choosing to starve herself. Munna did not want that any one should go hungry for his sake and, therefore, he left the place in the night, while the brief contact with Munna awakened in the heart of the mother in irrepressible craving for her own son. Munna is adopted by a kind-hearted MADARI (juggler) but then he falls in the clutches of a goonda who maintains a gang of street urchins whom he exploits by making them work, beg and steal for hi.

From this degradation he is saved first by Lakhia and then by Chhaganlal, a low-paid clerk living in a chawl with his wife and ten children. Munna brings luck to Chhaganlal who is a small-scale gambler, but he is turned out when he is falsely accused of theft by Chhaganlals' children.

He goes back to Bhiku's hut, then the child is frightened by the drunken antics of Mangloo, a frustrated drunkard who is drinking away to forget and to die.

From here he hides in a temple where Mrs. Lakshmidas, the childless wife a millionaire, sees him and, accepting it as a heavenly omen, adopts him. Here, too, Munna's innocence brings about a change in the mind of Seth Lakshmidas-he loses his earlier preoccupation with money.

Meanwhile, Munna's own mother has traced him to the house of Lakshmidas. She goes there to demand her son but decides to sacrifice her own happiness when she sees what life of comfort her son leads here. She is about to leave, when Lakshmidas reveals the truth to Munna. "That's your mother-you can go with her, or you can remain here as our son."

The decision is with the boy. Standing between Riches and Poverty, which way does the innocent instinct of a child move MUNNA? 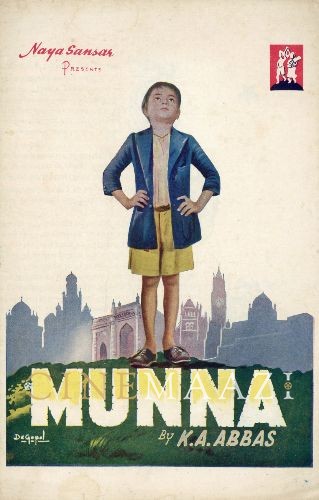