D.C.P Ram (Dharmendra) is a brave and loyal Police Officer, when ever crime took place in the city he arrested the Criminals and send them behind the bars.

One day D.C.P Ram arrests the biggest Criminal Jabar Singh (Mukesh Rishi)and sends him to jail for seven years. After seven years Jabar Singh gets released from jail and kills D.C.P Ram’s son by a bomb blast , and disappears from the sight of Ram for ever.

In search of Jabar Singh Ram raids a club and arrests the owner Badshah, but the Commissionor of Police releases Badshah by the pressure of Seth Jwala Prasad. When D.C.P Ram comes to know about this incident he gets angry and resigns his Police Job. And Then A.C.P  Ram becomes Ace of spade, Behind the mask of the Ace of spade he starts killing criminals.

Ram’s younger brother Sanjay (Siddharth Dhavan) works in a motor garage, and loves a girl Tara. Tara’s father had been murdered by some goonda element years before.

Inspector Rahul (Harish young) is a loyal officer he has only one ambition that he wants to arrest mafia don Swami Lankeshwar. When Lankeshwar comes to know about Rahul’s intention, he gets angry and takes revenge from Rahul by raping his younger sister Urmi, and killed by his goons.

Is Ram alive? Can Rahul arrest Swami Lankeshwar? Are Asha and Rahul, Sanjay and Tara able to marry ? When there questions arise, NYAYA DAATA IS THE REPLY. 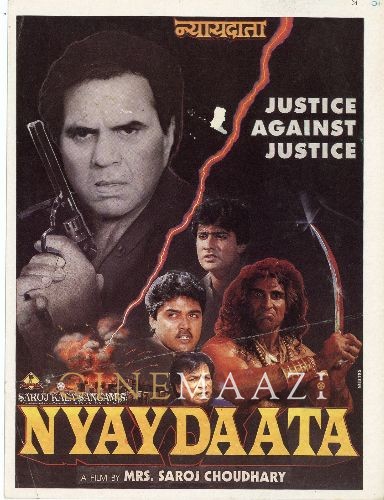