A Tribute to Mehmood 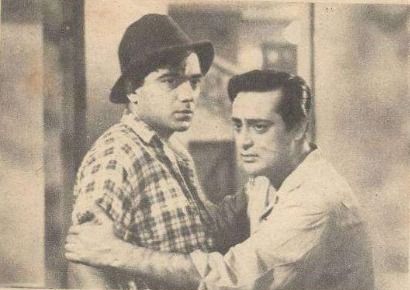 The standing of comedy in Indian films has more often been that of an add-on, an afterthought, just one more ingredient of the famous masala that makes up the spice of Indian films, especially those produced by the Hindi film industry. As a result, most comedians were forced to be nauseatingly repetitive. It made a mockery out of the comedy that began to rely on ordinary slapstick.

Intelligence in comedy began to be seen in Hindi films only in the sixties and the peak of this new comedy stood Mehmood. To say that Mehmood evoked laughter is not to know Mehmood at all because the mention of this great comedian brings to mind not just a caricature or one line here and their artist or just a queer mannerism, but memories of characters and their images that invoked entertaining and mature humor.

Mehmood made his audience laugh through the travails, the troughs, and highs of the characters he portrayed. The characters were such that the audience saw the humor in their own life.

When the author of this biography, Mr. Hanif Zaveri, requested me to write a few words on Mehmood, I could not refuse. The audience knows Mehmood as one who made them laugh through their tears. But I know the man behind the laughing mask.

Mehmood was always vulnerable to getting hurt. An earnest joyous man, he empathized with everybody he met. He laid great emphasis on the voice of his conscience that remained always crystal clear and pure. Those who carry their heart on their sleeves are liable to be hurt easily. But Mehmood’s spirit was tougher than what most people gave him credit for. Every hurt only made him a bigger man and a more sensitive mature actor.

I worked with Mehmood for the first time in Aspi Irani’s film “Qaidi No. 911” where he played the lead role. He was the hero and I was the heroine, yet we felt extremely uncomfortable playing this relationship on screen. Something would just not click between us and we remained closed and aloof, facing the camera mechanically. We were treating the work as a job. We did not enjoy it. As soon as the shot was over, we would quietly go back to our rooms and remain inside until the director called us for the next shot. The most uncomfortable moment was the shooting of a very romantic song.“Hathon mein haath hai, tera mera sath hai, dekh sama chayya chayya.

Then came L.V. Prasad’s “Chhoti Behen” where we played the roles of brother and sister. A new relationship was formed. It was as if we were always meant to be brother and sister. The chemistry clicked wonderfully, not only on-screen but off-screen as well, and since then Mehmood has always called me “Chhoti” I have called him “Bhaijaan”. All through my professional life, and later when I left the film industry, Mehmood always stood by me.

When he made his own film “Pati Patni”, he asked me to play the heroine. The director of the film was S.A. Akbar, Mehmood’s brother-in-law, who had directed another of Mehmood’s home production film, “Chhote Nawab”.

The hero was played by Sanjeev Kumar. The audience of popular cinema did not know of him at all. It was a subject I did not like because it was not heroine-oriented. I was defiantly reluctant to take the film. Mehmood reassured me, “Chhoti, please believe me I will take care of everything, I promise.” As always Mehmood was so earnest, I agreed. The film was a big success.

In fact, most of the films that I did with Mehmood were hits “Badi Didi”, "Gumnaam”, “Bedaag”, “Woh Din Yaad Karo” amongst many others. We proved lucky for each other. The stranger thing is we always met on the sets of films. We never went to each other’s houses. It was only a few years ago when that I had gone to Bangalore that Mehmood somehow got to know I was staying with Waheeda Rehmanji. He too was staying in his farmhouse in Bangalore. He came to Waheedaji’s house and took us both to his farmhouse where we had a lovely time together.

Mehmood faced life with good humor. The pettiness of the people around him only made him feel pity for them. Their meanness only made him sympathize with them. Unafraid, to an extent even unconcerned about competition, he was one of those rare actors who loved those who were perceived as his competitors. In his own film like-“Sadhu aur Shaitaan”, “Padosan”, “Bombay to Goa”, “Ginny aur Johnny” and “Kunwara Baap”, Mehmood had the top comedians of his time to act with him. He often took a lesser role for himself.

I was among those few with whom Mehmood would share his troubles. But otherwise, he has always faced life on his own terms.

I saw his most sensitive side, often expressed peculiarly, sometimes extremely reserved and at times flamboyant when my fiancé Manji (Manmohan Desai) passed away suddenly. Manji’s death was a big blow to me and I badly missed Mehmood’s support but strangely he neither called nor did he come to see me. I waited for him to come and talk to me, to say something. I could not believe it. It was strange behavior from the otherwise caring and loving Mehmood which I could not understand nor explain.

A few months after the incident, we met accidentally at Saira Banu’s house. Mehmood had come there to meet Yusuf Saab (Dilip Kumar) and I to meet Sairaji. When he saw me, he sat quietly in one corner looking at me with the strangest of looks. He seemed to be searching my soul, penetrating inside and soaking up all the pain tucked away in a corner till then. I felt strange. His eyes moistened as if he could feel my pain. Then he came up to me, put his palm on my head, and said, “Chhoti, why did this happen to you?” we cried together, and all the pain washed away.

Mehmood is very ill today and far away, in the US, I know his family takes good care of him. I cannot do much for him except pray. I wish God lets him keep his smile.

(This foreword was written when Mehmood was in the United States)
June 30, 2003.

This is a reproduction of the original published in Hanif Zaveri's Mehmood: a man of many moods published by Popular Prakashan in 2005.

The accompanying image did not appear with the original publication.