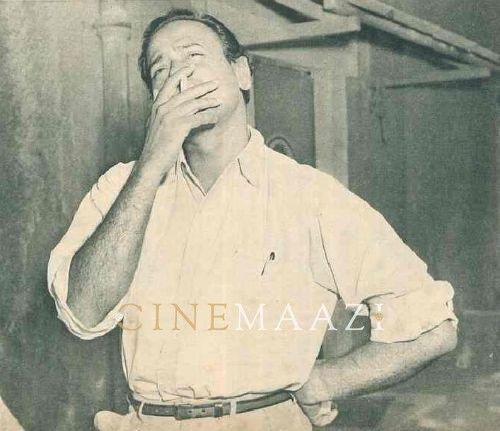 At random if you ask me to pick some of the most memorable moments in Hindi cinema I'd point out two: first, the great Tripti Mitra whose performance in Mahesh Kaul's Gopinath (1948) was so riveting and so memorable. I saw the film for the first time only in a second or third reissue some years after its original release, but Tripti Mitra's performance in Gopinath haunts me even today.

Another haunting and soul searing performance, one to which I was much closer because the film was made in my time and its producer and stars were close to me...how many of you remember today a Bengali actress named Pronoti Ghosh? My God, what an artiste she was. I met her through my very good friend the Bengali leading-man Abhi Bhattacharya who (in the fifties) was a close friend of my close friend Dilip Kumar and who, as a nephew of the well-known entrepreneur, businessman and producer (Biraj Bahu, 1954) Hiten Chaudhury, stayed at Hituda 's spacious Pali Hill apartment in those days.

Pronoti and Abhi were intimately involved with each other and the Calcutta-based Radheshyam Jhunjhunwala was producing a film named Parichay (1954) co-starring them both. It was a Hindi remake of a Bengali film directed by Bimal Roy, and Satyen Bose had been entrusted its direction.

Pronoti Ghosh played a deaf-mute - she had played the same role in the Bimal Roy original too. I'll never forget her performance, especially that one scene where, suspecting that her husband is attracted to another woman, Pronoti goes berserk. That one scene of violence unleashed by a helpless human being deprived of the power of both speech and hearing makes my body-hair stand on end even now when I hark back to it. Pronoti was a very great artiste and it is sad that death long ago cut short a brilliant career.

Then I remember Suchitra Sen in Bimal Roy's Devdas (1955) opposite Dilip Kumar and much later, in Gulzar's Aandhi (1975) opposite Sanjeev Kumar. And in more recent times I cannot fail to mention Jaya Bhaduri's deaf-mute with Sanjeev Kumar (also playing a deaf-mute) in Gulzar's Koshish (1972) and, going back a little, I particularly remember that very riveting moment of Raakhee's in Sunil Dutt's Reshma Aur Shera (1971) where the young bride hears of her husband being killed and that scene where like a wounded tigress she beats her wrists on the wall, smashing her bangles to smithereens. Raakhee too has given to Hindi movies some very superior performances and I remember her especially matching histrionics with Sharmila Tagore in Yash Chopra's Daag (1973).

Anyway, I must come back to Abhi Bhattacharya, Pronoti Ghosh and Parichay, and to a hilarious incident which took place soon after the release of that film.

Parichay had impressed my film-critic colleagues of that time and Abhi Bhattacharya asked me to invite them for drinks and dinner to Hiten Choudhury's apartment on Pali Hill. My colleagues were eager to meet Pronoti.

We were all confirmed drinkers and Abhi had arranged, not without difficulty, a couple of bottles of Scotch for us. I must remind you that it was the height of the Morarji Desai Raj in Bombay and Prohibition was strictly enforced. Raids were regularly conducted in speakeasies, addas, and even in private homes, and prohibition-offences did not respect social status at all the millionaire was as likely as the millhand to be arrested for a prohibition offence in those days.


Okay, so there we all were, we booze-brothers squatted conspiratorially around on the carpet and divan in that private and cosy little den which Hituda had in his huge flat, to which one had access only through a little stairway in a secluded corner of his huge apartment. Abhi was pouring, we were drinking, and Pronoti was chatting with us.
Before we could finish the first bottle however, a terrible thing happened. Suddenly, in the dead quiet of the night, we heard jeep-engines come growling angrily into the compound, jeep-doors banging shut, and the sudden shrill shrieks of police whistles rent the night.

A raid!
"Empty the bottles!"
"Wash the glasses!"
"Everyone downstairs!"
"Go to the dining-table! Let's all sit for dinner!"
"Quick! They'll be up any moment!"

In one mad rush we all went down. Someone had emptied the Scotch into the wash-basin and washed away all traces from both the bottles. Others had washed out glasses and put them on the dining-table. Quaking with fear we took out places at the table, expecting any moment heavy banging on the doors and gruff voices demanding us to "open up in the name of the law."

Nothing happened.
Seconds passed. Then a minute or two.
Dead silence.

The servants went and peered over the balcony. Then Abhi Bhattacharya also went. "I can't see any jeeps or anything here," he said. "They most have gone away."Gone away? Wasn't that unusual if this was a Prohibition raid?

By then whatever little nasha we'd imbibed had vanished. Our good mood had turned miserable. Ex-pecting some sort of delayed action we ate dinner in silence. And went home, still peering here and there in the darkness to see if any policemen were lying in wait to nab us!

The following morning I got a phone call. It was from director Satyen Bose, inquiring solicitously about last night. I got calls from all my journalist colleagues saying Satyenda had rung them up too. Still nothing added up. And then Abhi Bhattacharya phoned.

"It was all a horrible practical-joke Satyenda played on us last night," Abhi said. "He'd heard about the party and was peeved that he'd been left out (after all, he was the director of Parichay). So he hired police uniforms from Maganla I Dresswala, he hired some jeeps and he and his assistants staged a mock-raid in our compound!"

It was one hell of a practical joke — and for months after that, whenever one or other of us happened to meet Satyen Bose (I more than any of the others), Dada would have a big grin on his face at the fast one he'd pulled on us!