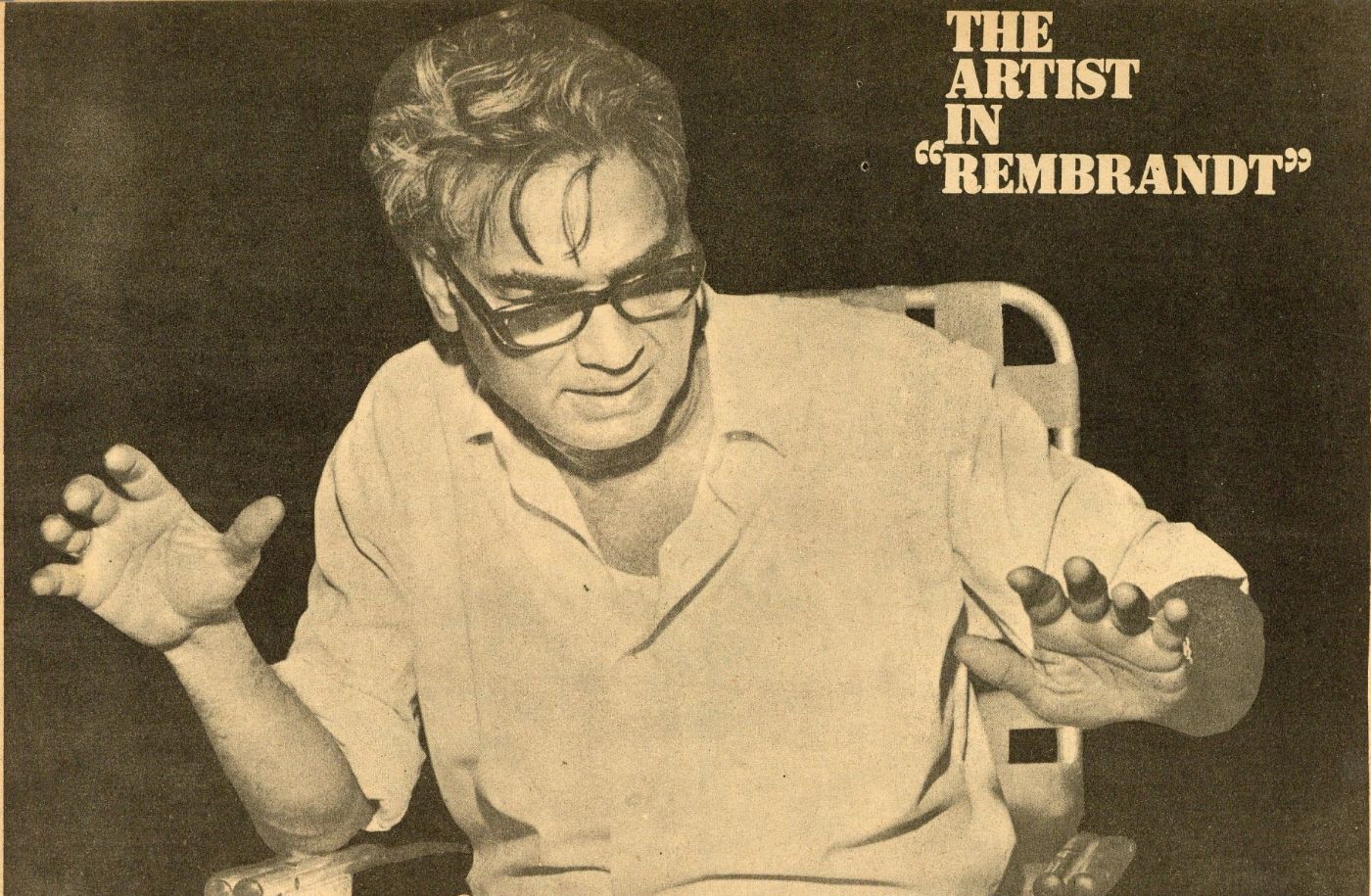 "The last flamboyant movie moghul".... no description is more apt for writer-director-producer Kamaal Amrohi than this one, for there were only two other filmmakers before him (Mehboob, Asif) for whom film making was primarily a way of life. Like Moghul-E-Azam (in writing of which he had a large hand) Amrohi's CinemaScope Pakeeza too, has been ten years in the making.
I had known the artist in "Rembrandt" for nearly two decades, since the time not one but two artists lived there.

As "staffer" of a leading fan magazine I was a fairly frequent visitor at the Pali Hill residence of writer-producer-director Kamal Amrohi, supervising colour-photography sessions of Meena Kumari, writing articles for and about her.

IN THE GRAND MANNER

I had known Kamal Amrohi since then. I had sat with him in his book-filled room an listened to him hold forth at length in chaste, involuted Urdu sentences while hukka hubble-bubbled interminably, creating with its murmurous melody a sense of infinity, a sense that there was all the time in the world to think, to discuss, to contemplate, which, in terms of the feudal Muslim era and its way of life, meant to live.

Kamal Amrohi's life in films has been stark, and each achievement has been an individualistic one. Witness Sohrab Modi's Jailor (1958) and Pukar (1939) both of which were written by him. Here was dialogue writing in the grand manner, a style of writing which has passed with the style of film making which it adorned.

Witness again Bombay Talkies' Mahal (1949), which was written and directed by Kamal Amrohi. That ethereal, other-worldly semi-fantasy which breathed of eternal love and reincarnation will always be remembered for Lata Mangeshkar's Ayega ane wala and for vivid performances from Ashok Kumar, Madhubala and Vijayalakshmi.

Witness even further his first production Daaera (1953) which was also written and directed by him an which starred his wife Meena Kumari. Very few people (including myself) claimed to understand the film, let alone like it, with the result that it was a box-office disaster. Yet Daaera too breathed another-worldly fragrance, a delicate beauty which justifies the claim some people make that the film was made ten years before audiences were ready for it.

Witness, some years after Daaera, a film intriguingly titled Dil Apna Aur Preet Parai (1960) (knowledgeable people assert that the title was suggested by Meena Kumari), which was written and produced by Kamal Amrohi.

Then comes Pakeeza (1971), the concept of the pure woman.

Kamal Amrohi first wrote it in 1956. Through the fifteen years that have passed since the writer first conceived this film, a long and fascinating history of ambitions and frustrations, of effort and sacrifice, of personal tragedy and regeneration has unfurled itself.

Kamal Amrohi told me some of that history as I sat with him in "Rembrandt" after many years on that Sunday morning on August 1, a day which, significantly enough, happened to be Meena Kumari's birthday.

As I concentrated on listening to him, my mind busy "translating" his pure Urdu phraseology into terms of common-man understanding, I thought how much the history of Pakeezah, which is at long last complete and very close to release, resembled-and even far outstripped - the history of Marlon Brando's One-Eyed Jacks which went so heavily overbudget that one Paramount executive is reported to have sarcastically commented: "This is not film making. This is a way of life."

It is a way of life for Kamal Amrohi too. Just look at the history of Pakeezah and you will begin to perceive what I mean.

Written in 1956, Kamal Amrohi first thought to do the film for Filmistan. Quickly discarding this notion, he started producing it himself in 1957, in black-and-white for the standard-size (35mm) screen. But as soon as one song was recorded the writer-director began to visualise impossible splendours for Pakeezah and switched over to colour.

So the first set was erected and shot, in colour. But those impossible splendours were palpitating with life now. The grandeur of those feudal settings, painted in loving, meticulous detail on paper by the art-director, had taken actuality on the studio floors as money poured lavishly into the creating of them. Taking one look at the colour rushes in 35mm of that first set, Kamal Amrohi decided on the spot that the standard-size screen was not big enough to contain Pakeezah. It had to be done in CinemaScope.

The actual shooting of Pakeezah in Eastmancolor and CinemaScope commenced in August 1961 (on August 1st perhaps, Meena Kumari's birthday?). Kamal Amrohi worked on his creation like a man possessed. The demon for perfection in him was unleashed and, scenting blood, drove him over twenty thousand miles across the length and breadth of India more than once, through Madhya Pradesh, Rajasthan, Aurangabad and many other places, searching for an authentic locale-a cemetery, specifically as the writer in him had visualised. After a marathon search, he eventually found a  cemetery which seemed as though it had been created especially for Pakeezah. That was in Khuldabad, and that is where Kamal Amrohi eventually shot a key-sequence on his film.

From 1961 to 1964 Pakeezah grew and grew to magnificent dimensions. In these years four elaborate and very huge sets were erected for the film, three of which Kamal Amrohi named as "Gulabi Mahal", "Gali Qasim Jaan" and "Bazaar-E-Husn". Besides a multiplicity of smaller ones.

In 1964 the films ran into difficulties, not the least of which were financial. For the next four years, up to 1968, little work was done on it. But the demon in this perfectionist was still hungering to free itself of Pakeezah, and there was only one way in which he could that: by completing the film.

And that Kamal Amrohi did between 1968 and 1971. How many times these sets were created and recreated, how many limitless millions of rupees were consumed in the endless miles of CinemaScope celluloid exposed on Pakeezah are of little enough relevance now that the film has eventually been completed.

But what a saga it has been! And how much of talent has accumulated over the years in Pakeezah!

First was Ghulam Mohammed the music-director, who completed the recording of all the songs of the film before it even commenced shooting, Ghulam Mohammed had for years been an assistant to the maestro Naushad, so it was in the fitness of things and an old-world gesture so typical of Naushad, that he agreed to score the background music of Pakeezah after Ghlam Mohammad's death.

Veteran Bombay Talkies cinematographer Josef Wirsching, who did the bulk of shooting on Pakeezah, also passed away during its making, and a succession of top-notch cinematographers (Jal Mistry, Nariman Irani, R.D. Mathur, Murthy and now Ramchandra) have photographed Pakeezah.

A variety of leading men too have paraded before the Pakeezah cameras. Originally, Ashok Kumar was to play the role of which Raaj Kumar now plays in the film. For a while, Kamal Amrohi himself donned make-up to play the role which Ashok Kumar now plays. But quickly, and realistically, the writer-director-producer discarded both the make-up and the notion. Dharmendra was there for a while in Pakeezah. So were a couple of new finds. Now of course, the star cast of Pakeezah is adorned by those three superb artistes - Ashok Kumar, Raaj Kumar... ...and Meena Kumari, of course. She was always there, in Pakeezah. Meena Kumari is, in fact, Pakeezah.
What then, is Pakeezah? I know. Because I sat and listened to its creator lay bare the soul of his film for the best part of four hours.

Pakeezah is a magnificent recreation of the feudal Muslim culture as it existed in India in the early twenties. It is huge, ornate, gorgeous. It dazzles the eye with impossible splendours. But Pakeezah is more than that.

This article was originally published in Star & Style magazine on 17 September 1971 issue. It was written by Bunny Reuben. The images used are taken from the original article.
966 views