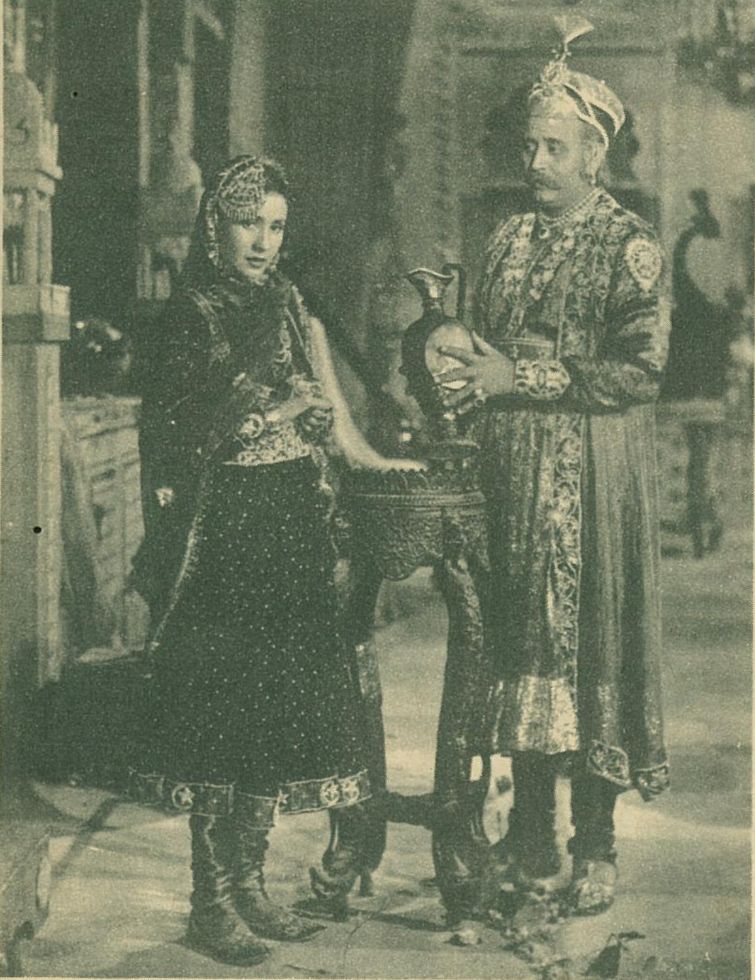 Khursheed and Mubarak in a still from Tansen (1948)

Historicals in Hindi cinema have rarely been known for any painstaking devotion to historical or period authenticity. The old-world backdrop has more often been used in the form of spectacle-cum-legend, with a number of songs as they are an inseparable part of the Hindi film, of whatever type it be. Ranjit's Tansen in 1943, directed by Jayant Desai for producer Chandulal Shah, followed the same tradition so far as the historical and biographical sides are concerned, but it had at least a legitimate background in Emperor Akbar's court.

And the film is rightly remembered for the rapturous, classically based music of Khemchand Prakash, having thirteen haunting songs, with the lyrics penned by D. N. Madhok and Pandit Indra. The music got a real lift because of Chandulal Shah's clever casting of two famous singing artistes of the time in leading roles. Saigal, acting in the Bombay film by courtesy of New Theatres, perfectly fitted into the role of Tansen. Khurshid (who recently paid a brief visit to India after her migration to Pakistan) played the more or less fictional character of Tansen's childhood be-loved Tani. Akbar's image was recreated in a very believable way by actor Mubarak.

In the shaping of the film, there was little regard for history and much emphasis on dramatic situations highlighted by songs. This of course made the film very popular with music-loving cine-goers. Saigal sang Kahe gumaan kare, ri gori to describe the natural vanity of the pretty young lass, Room jhoom chaal tihari to tame a mad elephant with the magic of music, Sapta sur teen gram to show Tansen's musical prowess, reaching a climax with the memorable Diya jalao in Deepak raga, that lights up all the lamps in the palace but puts a strange, scorching fire within Tansen's entire being.

The feast of music with a classical flavour that was perfectly in step with the historical background, compensated for many other shortcomings of the film, the most conspicuous ones pertaining to the period and events, though an effort was no doubt made to reproduce the pomp of the Mughal era through sets and other paraphernalia. In later years, a couple of new versions of the subject were tried without much success like the Bengali Tansen of 1958 and the Hindi Sangeet Samrat Tansen made by S. N. Tripathi in 1962. Though the latter film had classical music and the necessary period backdrop, its failure again pointed to the shrewd method in the original "Tansen" of blending the classical with the popular, both in the music and the film.