Remembering A Pioneer : A R Kardar 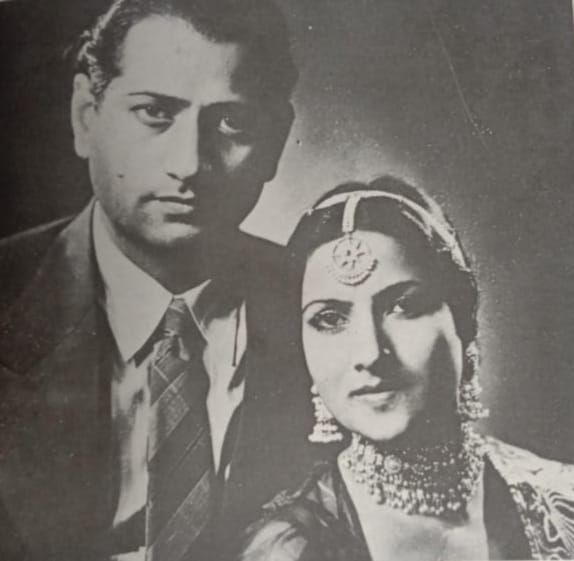 Kardar with his wife Akhtar Sultana

Venue: a large flat on the Marine Drive sea face. Windows are closed to prying neighbours. You are ushered into the living room. Photographs and paintings adorn the walls. There's an IMPPA award on the mantelpiece given to A.R. Kardar for his outstanding contribution to Indian cinema.

You are asked to wait as memsaab is doing in prayer.

"Hello, I'm Yasmin Kardar." You shake hands with the 40-year-old jeans-clad daughter of the doyen of Indian cinema Kardar who passed away on November-22 last year at the age of 83. Yasmin is youngest of the six daughters of the stalwart. The other five are married and live abroad.

She begins "What can I teIl you about my father? He is one of the pioneers of Indian cinema."

Lahore-born Kardar entered the film industry in 1929. From Lahore he went to Calcutta and finally came to Bombay. A decade later, he established Kardar Studios in Parel, Bombay. His first film under the Kardar banner was Sharda (1942) starring Nirmala Devi.

"I have fond memories of my childhood," reminisces Yasmin. "We were born with silver spoons in our mouths." She's not exaggerating. They were the first to own a Cadillac in Bombay. All of them studied at Jesus and Mary's convent, Colaba. Each of them had servants, governesses, cars. Although they came from an orthodox Muslim family, their parents were extremely broad-minded and the girls were allowed to do as they pleased.

However, Kardar tried to keep his daughters away from the film industry. "His daughters were his daughters," explains Yasmin. "Maybe if our brother was alive it would have been different." (Her brother, the oldest, died when he was three).


Yasmin and her sisters were not interested in show business. Yasmin says, "Our social circle was different. The industry was just not our cup of tea. We stayed away."

Several big names now were small fries then. "I remember," says Yasmin, "my father used to have story sessions at home and several industry people used to come over. But we stayed in one corner of the house. We did not even bother to go and look."

Kardar was very upset when his daughters took up jobs outside. What is the need? he asked. "But, we used to feel bored lazing around the house." explains Yasmin. All of them took up airlines jobs. Yasmin flew for Air India for six years till she got married and settled down in Muscat. After her divorce, she came back to India to live with her parents.

Talking about marriage, she says, "My parents shared the most wonderful relationship. They were so much in love with each other and were a lifelong inspiration to one another. There was a 15-year age difference between them. When my mother died in 1988, a part of my father went with her. He never quite got over the shock. He kept saying, 'She'll soon be fine.' Just a few days before my mother's death, Raj Kapoor passed away. My father who was very close to the Kapoor family, went into a heavy depression.

"Yes, very few industry people attended my mother's funeral. But at such times, you are so lost yourself that you are not looking to see who was there and who wasn't."

Kardar, in his heyday, used to act, write his own scripts and even perform his own stunts! While doing a stunt for one of his films, he fell down and from that time he suffered from terrible migraines that plagued him for the rest of his life.

Yasmin says, "The press once told me that my father lived and breathed films. He was extremely active and even when he rested, his mind was active. He always told me that he'd like to die with his boots on."

Suraiya often tells Yasmin how her father commanded respect from the industry people: "Everyone stood up and wished him when he came on the sets. The stars schedules revolved around miyaanji as he was fondly called. Maybe there were requests for a change of dates but no demands. In those days, there were just three directors — Mehboob Khan (my uncle), V. Shantaram and my father," says Yasmin.  "Us zamane mein aur is zamane mein zameen aasman ka pharak hai" continues Yasmin. "Star scandals make more news than the movies. Not that in those days there was .......... But the stars like Madhubala, Suraiya and Nargis were really different. Their acting caliber spoke for them. Sunil Dutt, Rajendra Kumar, the Kapoors were a real dignified lot. Nowadays there are only a handful who are courteous. My father could never understand the tantrums the younger lot throw... with producers pleading for dates. He often told me that he would never be able to work in today's industry."

Yasmin is looking after the distribution rights of her father's films. She says, "Dilip Kumar did a beautiful film with my father - Dard (1966). But the film I liked best was Dastaan (1950). Raj Kapoor has never looked better or acted better than he did in this film. My father introduced Naushad to the industry and he scored some beautiful music." Uma Devi, better known as the comedienne Tun Tun, sang the memorable song, Afsana lik rahee hai for one of Kardar's films.

You can sense the pain in Yasmin's voice when she talks about her father's last film, Dil Diya Dard Liya inspired by Wuthering Heights. It did badly at the box office. She doesn't want to talk about it, she says. You don't want her to. You know all about it... Dilip Kumar playing dirty with her father and ruining him. All she says is, "If the film had been made the way my father wanted to, it would have been a super-hit. His ill-health and other problems did not permit him to work."

This article was originally published in Cinema In India: The Glamour Factor's February 1991 issue. The images used are taken from the original article.
463 views