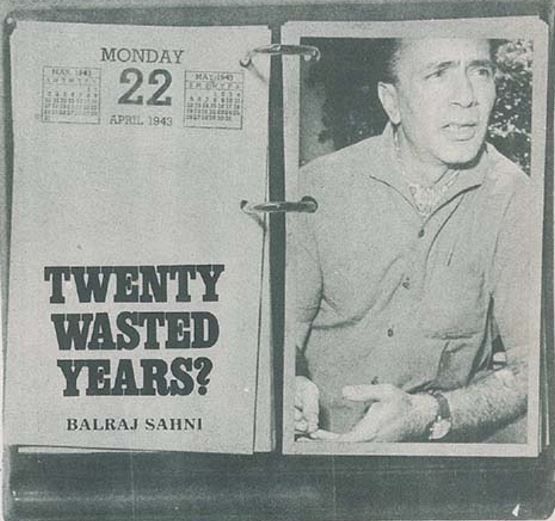 When I agreed to write under this title during a chat in a restaurant, I thought that I was perhaps doing so prematurely, that I could not have yet completed 20 years in films. But reaching home I calculated. I returned to India in May 1944, joined films in September that year. That makes it 22 years, not 20.
How time flies! Not an original statement at all. Everyone makes it. By the way, I can tell you how to make time stop flying. Write in a diary every day. Make it a routine. Do it in a thick book with long pages. You will put down so much that you will feel you have captured eternity. I have done it this year. I have written about it every single day. As an incidental result, I have given up smoking and drinking. I am avidly looking forward to the end of this year so that I can give up writing diaries also. Never has a year been longer.

Best thought on the subject is a verse I read years and years ago in college:

When as a babe I wept and slept
Time crept;
When as a boy I laughed and talked
Time talked;
When I became a full-grown man
Time ran;
And older as I daily grew
Time flew;
Soon I shall find in traveling on
Time gone!
To get back to the subject of films. Wasted? How?

I joined the films, but nobody wanted me in them. I was not good-looking enough, and four years in England had given me a typically English dead-pan face.

How deeply I fell in love with the theatre! We performed in all sorts of places - chawls, maidans, terraces. We made history by bringing a horse on the stage in Cowasji Jehangir Hall! Dev Anand rode it!
I got into the Theatre Movement. IPTA it was called. How I love that name! So many of us belong to that IPTA family - K.A. Abbas, Ravi Shankar, Chetan Anand. I remember once I wrote a play called "Jadoo ki Kursi" in just two days. Mohan Sehgal directed it and prepared it for the stage in just two days. We rehearsed it in a Kutchi friend's chili store in Masjid Bunder for want of any other place. Later, the owner of that store, Chamsibhai Nagda, also joined us and acted in a Gujarati play, "Allah-Beli". Today he too produces films! Our play was a box-office hit. Krishan Chandar, the well-known Urdu writer saw it eleven times and would have seen it for the 12th had the Government not banned it. Incidentally, both Mohan Sehgal and I, plus the entire cast, nearly went to jail for it.

How deeply I fell in love with the theatre! We performed in all sorts of places - chawls, maidans, terraces. We made history by bringing a horse on the stage in Cowasji Jehangir Hall! Dev Anand rode it!


Then the politicians mucked up our dear IPTA and out we all went - Abbas, Sachin Shankar, Ravi Shankar, Durga Khote, Shanti Bardhan, Prem Dhawan, Shailendra - oh, God! What a long list! That was the end of the heyday of the Hindustani stage in Bombay. Only the Prithvi Theatre struggled on for a few more years. Then it too stopped. We used to feed each other...

The other day I was invited to be the chief guest at the opening show of a play in Tejpal auditorium. My daughter Shabnam was acting in it. I stood in the wings before going on to the stage to make my little speech and accepted the garland for 'gracing' the occasion. I watched the actors and actresses rushing on and off the stage behind the curtain, grouping together and discussing. And I wept. I wept for no reason at all. But perhaps I wept because I felt so secure and relaxed in that magic stage world. I felt so sorry that I had ever left that emotional security in search of financial security. I felt that I had behind me twenty wasted years!

Believe it or not. I often break up the journey at the open-air Bal Gandharva Natya Mandir at Bandra on my way home in the evening from the film studios. I just sit and watch some group or other rehearsing a play, or even taking a dance lesson. I get carried into a magic world.

I dream all sorts of wonderful dreams, get ideas for stories, plays, films, and it relaxes me. I feel so much at home - because here artists are amateur and not professional. Here they are working for the love of art and not for money. There is an atmosphere of sincerity, simplicity, collectivity so sadly lacking in films.

I had my initiation into the theatre in very good hands. Our dramatic society at the Government College, Lahore, was one of the most progressive institutions of its time. Names like Imtiaz Ali Taj. G.D. Sondhi and A.S. Bokhari were connected with it. From those extremely competent producers, I had learnt that to devise realistic movements on the stage was in itself the greatest of joys, and nothing made the actor's job more delightful than to work with a producer who devised appropriate movements for him. To express his inner self in outer movement is the natural logic of an actor's work on the stage.

Nowadays the most significant centers of stage activity in our country are Bengal, Maharashtra, and Kerala. Excellent plays are being written and produced there. The acting is superb. But in the field of setting, lighting, and action there is a dismal drag. The only person who brings to the stage the magic of the kind I am talking about is Adi Marzban. But he selects such third-class and unoriginal plays.
Go to the studio, put the make-up on, work, come home and forget everything. Less work, more glamour! No worries, no problems, no hair-splitting discussions, no tortures of devising action.
And I feel certain I could have given this dimension to the Hindi theatre if I had not strayed into films. I would have matured a great deal by now, and perhaps could have put a Punjabi theatre on its feet in Bombay too. But I have moved too far away by now. I have no confidence. I tried to produce a Hindi play last year. I bawled so much that half the cast ran away from me.

And in films? I first tasted success as a writer, and not as an actor. I wrote the screenplay and dialogue of "Baazi", Guru Dutt's first directorial assignment. The picture was super-hit. Dev told me a couple of years ago that Navketan continued to have a regular monthly income from "Baazi".

After the success of "Baazi" my friend Chetan Anand asked me to write and direct the next Navketan film. The story was selected, the work began. But in the meantime, "Hum Log" clicked, in which I had acted the man role. I did not click on account of me. My acting was just horrible. My stony, expressionless face frightened people; but fortunately or unfortunately that particular kind of face suited the needs of that particular kind of story.

After the success of "Hum Log", I started getting attractive offers as an actor. It was easy money. Go to the studio, put the make-up on, work, come home and forget everything. Less work, more glamour! No worries, no problems, no hair-splitting discussions, no tortures of devising action.

Now, if I had stuck to writing and direction. I could have contributed something. My temperament was eminently suited for it. I have always been a bit of a writer; I did my M.A. in literature. Actually writing is the thing I hope to fall back on when I leave the films or, which is more plausible, the films dismiss me.
Then why did I not take to writing as a profession?

Perhaps I would have earned less as a writer or director, but the satisfaction would have been ever so much greater. Maybe I was the man destined to lift the Hindi film up from its plebeian rut? Who knows? What a waste of 20 years' time! I can't go back to it now because I will never have that confidence. I have developed what is called a tennis shoulder.

And what about the screen roles I have played? It is true that I have played a greater variety of roles than perhaps any other actor on the Hindi screen. "Do Bigha Zamin". "Kabuliwalla", "Haqeeqat", "Waqt", "Garam Coat", "Taksaal", "Asra", quite some variety; And yet, to be quite honest, I could play each one of these roles ten times better today. I never had any training or guidance from anybody as a screen actor. In our world, nobody ever tells anybody anything. And so I blundered on. If I had achieved an earlier mastery of my craft, as for example, Dilip did, I could have the satisfaction of looking back on some superbly played roles. I can't. And now, when I feel I can act, no more good roles to look forward to. I am too old. What a frustration! All those 20 wasted years!


But the wise bird sitting on the top of the tree tells me, "Son, that is no way to talk."

The owl is right. I am wrong. I have done my wee bit. It may not be much, but I have done it, whether it is in acting, or writing, or any other social activity. The great thing was that I got a chance to do it. Far more talented people than me never even got a chance. And life does not end at fifty, it begins. It begins at any age one wants it to begin. One must have the lust for life. And I think I have it.

The article was first published in Star & Style Magazine on 12 January 1971, Volume 2, Issue 2. The images used in the article belong to the original article and the archive.
264 views

Other Articles by Balraj Sahni

Balraj Sahni on his Early Years