Vedachalam Mudaliar (D. Balasubramaniam) is a rich moneylender. Sarasa (V.N.  Janaki) and Murthy (M.N. Nambiar) are his children. Sarasa takes after her father and behaves arrogantly with the servants. However, Murthy is a good human being and has a soft corner for the servant maid Amirtham (M.V. Rajamma).  Vedachalam Mudaliar lends money to Sundaram Pillai (K. Mustafa). Unable to repay the borrowed money and finding it difficult to take Vedachalam Mudaliar’s insults, Sundaram Pillai commits suicide. His son Anandan (K.R. Ramasamy)  witnesses the suicide and decides to take revenge on Mudaliar. While he sharpens the knife to kill Mudaliar, his friend, Mani (T.S. Balaiah), a reformist and intellectual,  advises him to sharpen his mind to take revenge. Reformed, Anandan, an ardent devotee of Goddess Kali, prays to the Goddess to help him take revenge on  Mudaliar. However, Mudaliar becomes wealthier and becomes the owner of another estate, which infuriates Anandan.  Frustrated with the Goddess for helping the rich, Anandan abuses the Goddess at her temple. The devotees get angry with this behaviour of spoiling the sanctity and chase him away. Mani offers shelter to Anandan in a hideout where they find a dead body in a bundle.

On close scrutiny, they realize that the body resembles  Anandan; they learn from his diary that he is Paramanandam,  son of a rich but blind landlady of Mevaar Vilasam. Mani brings  Anandan to the village in the guise of Paramanandam. They host a  tea party and invite all the rich people, including Mudaliar. As  Paramanandam, Anandan soon marries Mudaliar’s daughter Sarasa.  To take revenge on Mudaliar,  Anandan harasses Sarasa and spends their money lavishly. Acting like a drunkard and womanizer,  he spoils Mudaliar’s reputation in society.  Coming to know of the love between Amirtham and  Murthy, Anandan creates a rift between his father-in-law and brother-in-law. Murthy leaves the house, meets Amirtham, and promises to marry her after getting the help of his friends at Madras. However, on coming to know that he is penniless, Murthy’s friends spurn him. Amirtham’s father Murugesan, who is a loyal servant to Mudaliar’s family,  plans to get her married to an old man to avoid further embarrassment to his master. When Amirtham comes to know this, she leaves the home on her own.

Balu Mudaliar  (Pulimootai Ramasamy), a rich man who became mentally disturbed after the death of his daughter, meets Amirtham.  He thinks she is his dead daughter Sumirdham and provides her shelter at his place. At his doctor’s request, Amirtham helps in Balu Mudaliar’s recovery, who treats her like his own daughter and permits her to continue to live at his house even after his recovery.  Murthy gets wrong information that Amirtham is dead through her neighbours in the village. Vexed with life and to get peace, he lands in an ashram run by Yogi Hariharadas  (M.N. Nambiar in another role). However, he soon comes to know the frauds of the yogi and during an altercation with  Murthy, Yogi dies; Murthy is accused of the murder and lands in prison. Mudaliar gets disheartened with the mishaps to his children. Mani brings Anandan as a North Indian lawyer to  Mudaliar, and Anand fights Murthy’s case in court.

Arguing beautifully in court, he establishes that, yogi was a  fraud and criminal wanted by the police; the death was not preplanned or intentional; it happened during self-defense.  The court acquits Murthy and he is released. When Murthy asks Anandan to name his fee for this great help, Anandan asks Murthy to marry Balu Mudaliar’s daughter. Murthy meets Amirtham, who is now known with a different name and is surprised that she looks similar to Amirtham. After the marriage takes place, Anandan reveals to Mudaliar that his son Murthy has married Amirtham, a servant’s daughter,  and he (Anandan) is the son of the servant Sundaram  Pillai. Berating Mudaliar about his arrogant attitude, money mindedness, and treating people badly, he shows how it harmed poor people. Mudaliar regrets his behavior and mistakes and apologizes to Anandan and Amirtham. The family is united.

It was the first film in Tamil cinema, which featured courtroom scenes, which then became a trend to include such scenes in later films.  The success of the film and its dialogues brought in fame and credit to the dialogue writer in Tamil  Cinema. After this film, the dialogue writers were paid better and the audience also started noticing their names in films. The dominance of dialogues in Tamil cinema began with this film and set a trend.

The film was remade in Telugu as Santhosam and in Hindi as Naya Aadmi with N.T. Rama Rao playing the lead role in both the languages by the same  Producer. The Telugu version failed while the Hindi version worked well at Mumbai. The film was also remade in Kannada as Malli Madhuve by M.S. Kasi for Jupiter Pictures with Rajkumar and Udayakumar and the film succeeded. 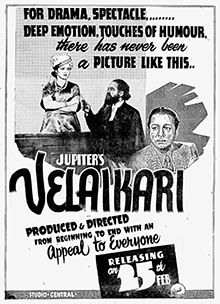