JEALOUSY like all great passion, when thoroughly aroused knows how to wait and Premchand sat waiting in his car with his wife Ramla for the Gates of Level Crossing No. 34 to be opened.

The signs were ominous. A fully loaded revolver slipped out of Premchand's hip pocket. But Ramla was not a bit perturbed. She had come to die at her husband's hand.

They were disturbed by the appearance of a mysterious - looking individual - as if from nowhere - who stood singing a plaintive song near a Marble Memorial shimmering in the clear moonlit night by the side of the Level Crossing.

Momentarily they forgot their own troubled thoughts to listen to his Mournful song. Whose suffering was greater - their or his? Whose heartache was more acute the stranger's or theirs?

"Ah, good people. Perhaps you do not know what it is to love and lose.. Yes, lose through folly... through mistrust being jealous" sighed the stranger.

"But for whom for what do you sigh? asked Ramla.

I'll tell you. See these writings in letters of gold. "She gave her life to save lives." Aye, to save me to save others.. may be to save even you." replied the stranger pointing his finger at the inscription at the bottom of the memorial tablet.

Premchand wanted to know all about this girl Kasturi in whose memory the tablet had been erected, and this was the story told to them by stranger.

"Kasturi, the Achhut Kanya and the Brahmin boy Pratap were playmates. They were fond of each other in the way the children are fond of their chums....a comradeship of the sort which springs simply and solely from enthusiasms and admiration. She adored him because he was to kind. He loved her because she could shift for herself and was plucky as they made them.

"Their fathers.... Dukhia, the Level Crossing Gate-keeper and Mohan, the village grocer, were likewise friends great friends. Once Dukhia risked his own life to bring back Mohan from the jaws of death and it would be difficult to enumerate all the things that made Mohan so attached to Dukhia, but it was certainly the closet attachment he ever had for a man."

But there were evil eyes in the village and evil tongues which never stopped wagging. For a Brahmin's son to play with a Dukhia's daughter was a sin! Friendship between a Brahmin and an untouchable, It was a crime! and Babulal the village quack who nourished a fancied grievance against Mohan planned and plotted to bring about his downfall.

He spread the news that a marriage had been fixed between Dukhia's daughter and Mohan's son and it was decided to ostracise Mohan and his family.

"Babulal, however received a rebuff when it became known that the bride chosen for Pratap was the daughter of a Brahmin.

On the day Mohan returned to his village home with Pratap and his bride Meera, news reached Babulal that Mohan had once again flouted them by bringing Dukhia to his home. Excited by the cunning Babulal, the villagers raided Mohan's shop.

It was true that Mohan had taken Dukhia to his home. He had been ailing for some time and the illness had a fast grip on Dukhia - a firmer hold then he had upon life and Mohan had brought him to nurse him back to health.

"The mob laid seize on Mohan's shop demanding that Dukhia should be turned out. Mohan refused."

"Feeble though he was, Dukhia appeared before the infuriated mob pleading for Mohan and offering to leave his house."

But the passions of the mob had already been aroused. They struck down Mohan and began to wreck and pillage his ship. Dukhia struggled towards the Level Crossing to stop the incoming Mail Trail and summon a doctor from the next station for Mohan.

Not satisfied with looting Mohan's shop, the infuriated mob new set fire to the whole place thus entrapping Mohan and his family inside a blazing room Pratap however rescued his father from the burning room and carried him to safety.

Dukhia stopped the Mail Train but the irate Guard refused to listen to him still undaunted. Dukhia jumped on the foot-plate of the moving engine but being too weak he was not able to get a firm grip of the handle and fell off. Kasturi ran to his aid as his frail body rolled down the steep embarkment.

Mohan and his family were left homeless and Dukhia too lost his job for having stopped the Mail Train. A young man named Mannu, came to take over charge of the Level Crossing 34 from him.

The police hastened to the scene of trouble and rounded up the rioters but Mohan refused to prefer any complaint against them.

Kasturi's marriage with Mannu, the Level Crossing Gate Keeper was arranged but realising how her heart yearned for her childhood's playmate Pratap, she decided to run away her father's home.

Pratap, too, suffered. He, too, longed for Kasturi. He, to, had no happiness in him at all. That he had a devoted wife only added to his suffering. He was unhappy away from her unhappy with her. News reached to Pratap that Kasturi's marriage had been arranged. A desperate resolve overtook him and he sought out Kasturi and proposed that they should run away together.

Kasturi refused to listen to him. She was an Achhut; he was Brahmin. It would be a sin. She exacted a promise from Pratap that would forget her and decided to resign herself to her fate by marrying the groom for her.

Then a capricious fate drew into her net Mannu's first wife, Kajari. As soon as she learnt that her husband had taken another wife, Kajari decided to return to Mannu and assent her rights as his first wife.

Mannu however refused to accept her, but Kasturi welcomed her rival with open arms and pleaded with Mannu on her behalf.

It was not in the nature of Kajari, whose pride and vanity were formidable to lose her husband without a struggle the struggle to hold a man against his will. So she commented to scheme that Mannu's love for Kajari be destroyed and in Pratap's wife, Meera, she found a willing co-worker.

One day in the absence of Mannu from the Level Crossing, Kajari and Meera persuaded Kasturi to accompany them to a fair in the next village. They knew that Pratap had taken a stall there and they conspired to leave Kasturi in the fair and carry a tale of her unfaithfulness to Mannu.

The plan worked well. Mannu on learning what Kasturi had done, prepared to wash her honour clean with her blood.

Meanwhile Pratap found Kasturi searching for her companions in the Fair grounds he offered to escort her back to her home.

As Pratap reached the Level Crossing with Kasturi. Mannu waylaid them and went to stab Kasturi with his dagger, Pratap went to her rescue and the two men fought a grim battle for the possession of the deadly weapon.

The Mail Train loomed prominently around the bend. Frantic with fear Kasturi tried to make them realise the danger to them - the danger to the train. But Pratap and Mannu did not hear her warning.

Kasturi rushed along the line towards the approaching train. The engine driver saw her but he was too late to save her!

So they erected this memorial in her honour because she gave her life to save lives.

The story teller finished his story and disappeared from view singing his mournful song.

Premchand led his wife back to the car. Puzzled by his attitude she asked Aren't you going to kill me?

No, I am not going to lose you through folly - through mistrust - through jealousy.

With a sad smile Ramala remarked "It seems the noble spirit in whose memory that monument had been erected still goes on saving lives." 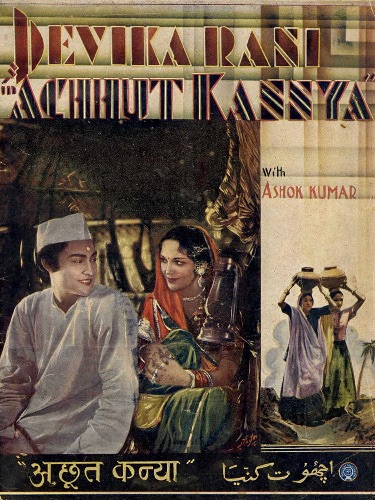