When I had money, everybody called me big brother goes an old adage. And so it goes without saying that all rich people are not only big in their own right but they expect others to call them big too. Time and again it has been proved that a big man is not that who possesses big money but the one who abhors wealth and toils for a livelihood while leading an upright life.

Keshav, a lock-repairer was a master at making duplicate keys and he was equally at home with mechanism of all sort of locks ever devised by man. One day his dexterity at the job was keenly watched by one customer, Raj Bahadur, who visualised that he could become rich quick if he could persuade Keshav to become his partner in breaking locks while he committed robberies under the cover of darkness. Raj Bahadur even told him that they could defy the law easily and remain respectable in the society. If a man becomes big by defrauding his fellowmen, it would not lead to a good end. That was Keshav's conviction and he adhered to it; come what may? He declined the offer of Raj Bahadur but he also knew that it was not easy to defy him openly. Keshav had to flee to another city and start life afresh.

He drove a Tonga to make out a living. One day while he was on his usual rounds of the city, he came across an abandoned child on the street and finding no next of kin, he brought him home and adopted him as his own child. Kishan, now, son of Keshav, a mere Tongawala, was not however deprived of any human bounty. He was well cared for and was also sent to a good school.

As the years rolled by, Kishan grew into a handsome and sturdy young man and unwarily fell in love with Radha, his classmate and a heiress.

Keshav came to know of this infatuation, and he assessed the disparity between the two families. He tried to bring about a happy union but the fate had something else in store for him. Radha was betrothed to Madan, nephew of Raj Bahadur. Keshav now found himself between the devil and the deep sea.

Did Keashav succeed in winning Radha's hand for Kishan? Could Radha succeed in making her people agree to the changing values of life? Did Madan, who had the backing of his uncle Raj Bahadur, succeed in his evil designs?

All this and much more shall remain anybody's guess till, dear patrons! you see this film for yourself on the secreen.......... 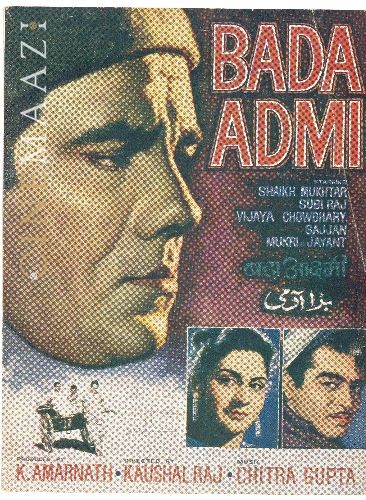