A ferocious man-eating tiger has let loose a reign of terror in an estate called Jamnanagar, the owner of which is a brave and young shikari Shekhar. The tiger which is very cunning and sensitive animal, foils all attempts of Shekhar to kill it.

During one of his hunting expeditions, Shekhar comes across a young and beautiful maiden Meena whom he saves from the clutches of a lustful goonda who tried to molest her in the jungle. This brief meeting of Shekhar with the girl soon blossoms into love and culminates into wed lock, but not before they have undergone the trials and tribulations of love.

Their happiness knows no bounds when Meena becomes the mother of a sweet lovely litle son.

The wheels of time keep on rotating and the son grows up into a young boy of five years.

In these five years, the man-eater has taken toll of many more human lives in the estate and the attempts of Shekhar to kill it do not meet with success.

The workers of the estate who are not able to tolerate the tyranny of the tiger anymore, decide to leave the estate and seek their livelihood somewhere else.

In the meanwhile, Shekhar is waiting on "machan" for the tiger, having tied a buffalo to a tree as bait. But the tiger which has developed a liking for human flesh does not even care to look at the buffalo and merrily goes on victimising human beings.

When the workers come and inform Shekhar of their decision to leave the estate, Shekhar assures them that if any one of them help him, his task would become easier and he would definitely be able to kill the tiger ! The workers readily agree to give whatever help he wanted, but when they come to know that Shekhar wants a man to stand as bait in place of a buffalo to lure the tiger, they all step back in horror and refuse to risk their lives.

Though annoyed at first at the cowardice of his workers, Shekhar sends them back, assuring them that he would do whatever needful and see that the tiger does not live to see the dawn of the next day.
And he brings his own son to stand as bait.

Does this risky experiment prove successful? What is the outcome of the conflict between the beast (JAANWAR) and the man (INSAAN)?

Answers to these questions, you will find in Dandayudhapani Films' "JAANWAR AUR INSAAN" which will give you the thrill and entertainment of your life time. 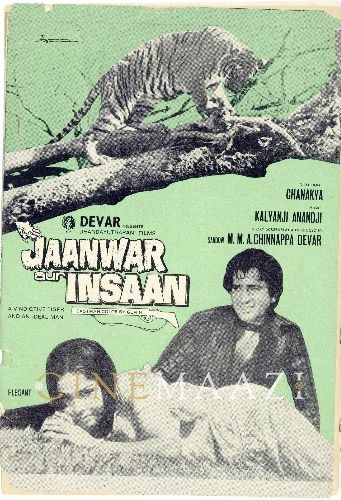