Jahanara was the daughter of that woman in whose sweet memory the Taj was built.

Jahanara was the daughter of that man whose reign was the golden period in the history of Mughal Empire.

That daughter JAHANARA was decorated with the title “BEGUM SAHIB” by her father—the great Emperor Shahjehan.

Even today she is remembered as Begum Sahib. Right from childhood JAHANARA had a love for poetry Mirza Changezi was one of the Royal poets.

JAHANARA had a soft corner for the poet, and hummed his poems. And Mirza Changezi too was very much under the hypnotic spell of JAHANARA.

Moonlight had just kissed JAHANARA when she had to give a word to her dying mother that she will not do anything that might bruise her father’s heart or hurt the great Mughal Empire.

JAHANARA gave a word to her dying mother.

Karuna—her childhood friend gave a word to Mirza Changezi that she will one day arrange a meeting of Mirza with Begum Sahib.

Aurangzeb came into power—He became the Emperor of India.

Shahjehan was imprisoned and had to pass the last days of his life in a dark corner of the palace.

To JAHANARA the dark corner was like a place of worship.

And a day came when the Mighty Mughal—the loving father left his devoted daughter alone to the winds of times.

The life of JAHANARA was like a fallen leaf.

There was a clash of two pledges. The promise of JAHANARA and the pledge of Karuna—the Rajput’s daughter.

Karuna had promised him the meeting. How they stood by the words?

“JAHANARA” (The Princess Among Pictures) is the life and love and devotion of Princess JAHANARA, the devoted daughter of the Great Mughal Emperor Shahjehan. 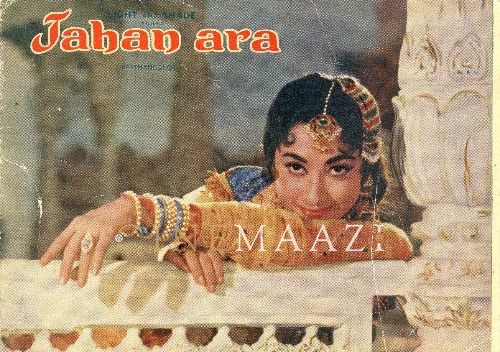