Behind every crime there is a criminal, and behind every criminal there is a story. KAARAN is the story of Suraj, a young man barely out of his teens, yet convicted for the attempted murder of a woman, his own mother.

Inspector Gill is a welfare officer. If Suraj is ever paroled, it will be in the care of Inspector Gill. He does not believe that any person can be totally bad, it is only circumstances that make a person good or bad, sinner or saint. So he studies the known facts about Suraj's case and meets first Suraj and then Mayadevi, the mother, to try to find the real reasons for the crime.

Several years ago, Maya was a struggling model girl, beautiful, ambitious, but foolish. She got involved with a person who got her pregnant and then diched her. Too late to get an abortion, Maya gave birth to her son Suraj. But the fierce rivalries of her profession and the fear that she may be rejected if it was discovered that she was an unwed mother, made her keep the birth a secret. She sent Suraj away to be brought up by an elderly couple in another city and herself began to scale the ladder of success till son she was the highest paid and most glamorous model in her home town.

But when Suraj was eight, the couple died, and Maya thought it was safe to have him back with her, of course as the orphan son of a poor cousin. Suraj arrived, and promptly fell in love with Maya. For her he was a new toy. But soon she wearied of him because he started getting in the way of her easy amoral life and she started discarding him in various ways. The final rejection for him came the day he discovered she was his mother. This blow he could not withstand and it turned him into juvenile delinquent. He turned wild and unruly at home and in school, was deliberately defiant and rebellious, till one day he committed a crime and was sent to a remand home. The biggest tragedy was that Mayadevi was secretly glad to be rid of him. But five years behind bars only hardened Suraj, and when he came out as a young man, he was a dangerous, cynical ruffian with only own goal in life; to avenge himself upon the world for all that his mother had done to him.

In all these years, Maya had declined but was still a force to reckon with. She had passed through a number of affairs and was currently the Mistress of one Mr. Gupta. Suraj quietly threatened to give up her ways but Maya had got too used to the easy rut of life to change at this age. But Suraj proved to her one stormy night that he was deadly serious when he caught her in a compromising situation and almost strangled her to death.

This then, is the story of Suraj's crime and Gill has to wrack his brans to find a way to straigten out the young man's kinks, and unravel the knots in his mind. But before this can happen, fate takes a hand and Suraj breaks out of the jail. Gill does manage to re-arrest him before he can do further damage, but it is on the journey back to prison that things change. They met Shashi, a girl who is running away from home. Gill stops to give her a lift but Suraj sees his chance and tries to escape. In the scuffle, the police revolver goes off, and Gill is shot in the stomach, and collapses unconscious, perhaps dead. Shashi is terrified of the vicious Suraj, but he forces her to help him lift Gill into the car and get in herself as a hostage. But slowly she discovers Suraj for what he really is, a sad hurt, disillusioned youth, seeking youth and affection and hiding his real self behind a veneer of toughness. Gill is left outside a small town hospital to be taken care of, the car abandoned, and when Suraj learns that Shashi is pregnant, and going to find the man so that she can force him to marry her, and give her child a legal status, Suraj takes charge of her, and promises to help her in her search.

But youth calls to youth, and unknowingly Suraj and Shashi fall in love, but union seems impossible since he is an escaped convict and possible murderer, while she is a pregnant runaway. The police are hot on their trail and Suraj is convinced that if he is ever arrested, the law will give him hell for being a policeman killer. (Suraj is convinced that Gill is dead). So Suraj is prepared to sell his life dearly. He would rather go down fighting and shooting it out with the police than be taken alive. Unknown to the two of them, Inspector Gill has recovered in hospital, and a grateful to Suraj for having got him medical aid in time and he has stated to his senior officers that the gunshot was an accident, and Suraj did not try to kill him. Also he pleaded with his Chief to tall off the chase and give him a chance to bring back Suraj single handed.

When Shashi reads in a scrap of newspaper that Gill is alive and asking for Suraj to surrender, she is terribly excited and pleads with him to do so, but he thinks it is a trap to get him into their clutches so that they can wreak their vengeance on him. Shashi decides that as long as Suraj has his gun, argument is useless, so she steals it one day and tries to throw it into a river. But Suraj stops her in the nick of time, and is furious with her. He almost feels that she is one of them, the Enemy. She cries and pleads with him that he give up the violence, they struggle and in the scuffle, she falls heavily and has a miscarriage. The sight of all the blood brings Suraj to his sense, he realises that how much he loves her, and that he cannot live without her. He begs of her not to die, he will get her to hospital, but she cries to him not to touch her, for as long as the gun is in his hand, they cannot meet. And here Suraj makes his final decision. He throws the gun into the river.

But was Suraj able to save the life of Shashi? Did Gill manage to salvage the youth of Suraj? Did Mayadevi realise that a woman has only one career, motherhood?
See KAARAN and satisfy yourself. The story of love versus hate. The film that gives you an insight into twisted human relationships B. R. ISHARA'S "KAARAN" 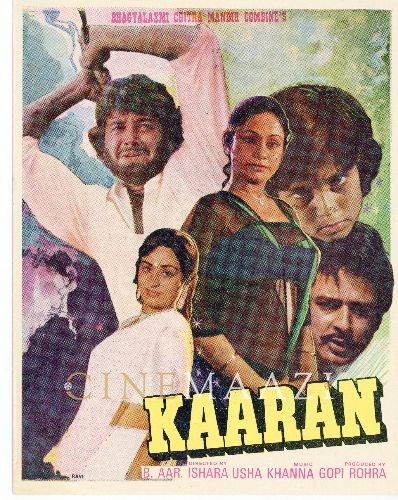 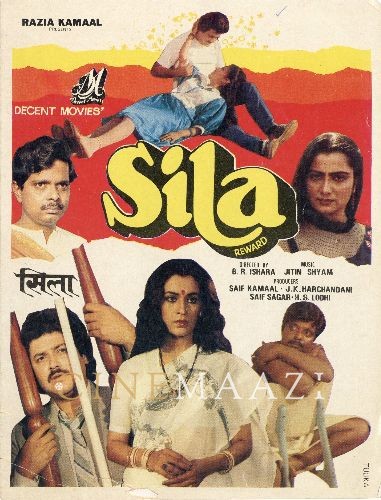 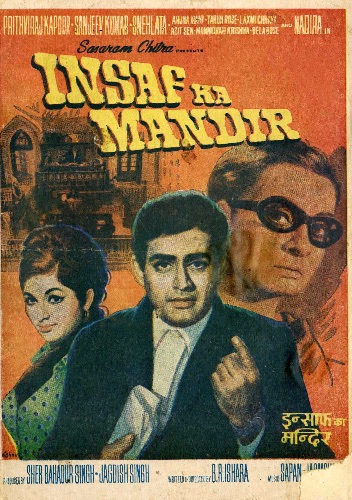 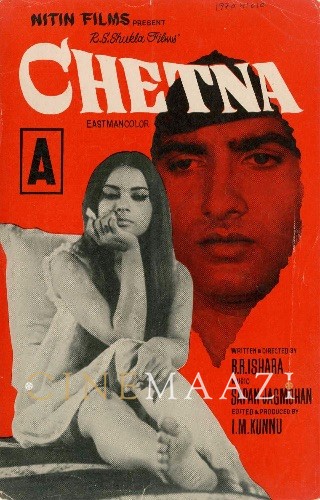