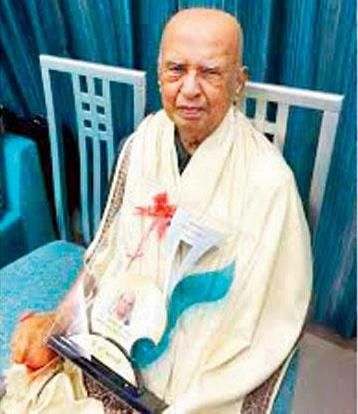 Prolific sound recordist, Durlabhdas Odhavji Bhansali, or D O Bhansali as he was better known, has more than 250 films to his credit, including Victoria No. 203 (1972), Ankhen (1968), Caravan (1971), and Mere Jeevan Sathi (1972). Popularly called 'Baba' in the industry and 'Bhai' by family and friends, he served the Indian music industry for almost 50 years. He worked with leading music composers over the years such as O P Nayar, Shankar Jaikishan, Madan Mohan, Kalyanji Anandji and Laxmikant-Pyarelal. A veteran sound engineer at Mumbai’s Famous Studio, he was among the last of his times who would place the music directly on celluloid. Active over several decades in cinema, his body of work includes gems such as Gaye jaa geet milan ke from Mela (1948), right down to Sun saiba sun from Raj Kapoor’s Ram Teri Ganga Maili (1985), which was among the last songs he recorded. He recorded most of the music of the films of RK Studios. In 2017, he was awarded the Lifetime Achievement Award for excellence in Recording Art by the Indian Recording Arts Awards (IRAA). He is also credited with the background music of Dekh Kabira Roya (1957), Udhar Ka Sindur (1976), and Yeh Kaisa Insaf (1980).

Born in 1925, his father, a booking clerk at a cinema hall, desired that he build a career in cinema; left to his own devices, Bhansali himself might have chosen to become a pilot or a naval officer. Joining the film industry in the 1940s, he found employment with Famous Studio as an assistant to the legendary sound recordist, Minoo Katrak. He remained with the studio till 1994 when it stopped recording. Later, he continued to undertake freelance work and also handled sound recording for the National Centre for Performing Arts (NCPA) in Mumbai.

During his many decades at Famous, he handled the recording for leading production houses such as Raj Kapoor’s R.K. Films, Guru Dutt Films, Dev Anand’s Navketan and the Barjatyas’s Rajshri Productions, who did most of their recording at the studio.

He was also known for weaving in sounds from five microphones using single track analog recording—he was among the few from his time who could accomplish the same. His years as a sound recordist saw him earn glowing reviews from music industry veterans such as Asha Bhosle, Ravindra Jain, Lata Mangeshkar, Suresh Wadkar, Anuradha Paudwal, Sonu Nigam and others.

Having worked on several RK Films’ productions, he would often recall how huge temple bells were brought into the studio to record the title track of Satyam Shivam Sundaram in 1978. His family was also close to the Kapoors, and would attend industry events.

Durlabhdas Odhavji Bhansali passed away on 4 May, 2020 in his hometown Jamnagar, where he had moved from Mumbai some years ago. He was 95. He was survived by his two daughters and a son, who lives in the US.