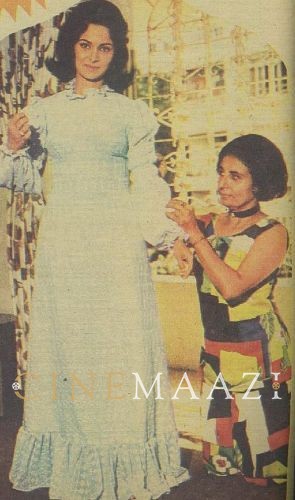 Rabadi’s father was a priest at a Parsi Fire temple but he passed away early in their childhood. Her mother made ends meet by cooking in religious events within the Parsi community. The two young sisters also contributed by working in a toy factory to finance their tuition fees. Apart from it, they did odd jobs and worked at a magazine to keep the household running. After she passed her high school examinations, she got a job as a secretary in Johnson & Johnson. Later her sister also joined the factory for a while. She got her break as a costume designer in Gujarati cinema first.

She made her debut in the Hindi film industry with Dev Anand’s Jewel Thief(1967). To accentuate Dev Anand’s suave look, he was seen sporting a bright red beret as a French jewellery importer. Apart from it, she also styled the unforgettable attires of Helen in the film. It was she who gave Jeetendra the white pants in Farz (1967) that is still etched to audiences mind when he is mentioned.

In Aradhana (1969), Sharmila Tagore wrapping the flimsy red blanket into a sari is one of the most iconic moments in Hindi cinema’s history. Additionally, Rakesh Khanna looking dapper in his blue suit with the red turtleneck cardigan in the song Kora kagaaz tha are all credited to Rabadi. Shammi Kapoor’s flashy suits and Helen and Vyjayanthimala’s costumes from Prince (1969) were also equally eye-catching.

In 1973, her costumes in Bobby were an integral part in creating the youthful energy of the film. Be it Dimple Kapadia’s black polka dot crop top or Rishi Kapoor’s black leather jacket, the attires embodied the characters’ rebellious spirit. There are many things to cherish about Don (1978) and one of them is Bachchan, Zeenat Aman and Helen’s wardrobe. The chic looks were possible due to Rabadi’s eye for detail. This is evident in small touches such as a combination of gumcha with a printed vest or a red bowtie for Bachchan, a black and white scarf for Aman or the chic look for Helen’s hit song Yeh mera dil pyar ka diwana. Bachchan’s look in the song My name is Anthony Gonsalves from Amar Akbar Anthony (1977) is also her handiwork.

Rabadi was known for her amiable nature due to which, people could approach her with their requests for altering their costumes. One of Bindu’s costumes in Kati Patang (1971) made by Rabadi was quite revealing which made her uncomfortable. Rabadi attached a skin coloured piece of cloth to put Bindu at ease. She is the reason for making the stars of the golden age of Hindi cinema look as glamorous as they did. Many stars of that period such as Prema Narayan, Waheeda Rehman preferred their costumes to be tailored by Rabadi.

Pestonjee (1987) is a film that represented the Parsi community on screen and Rabadi made the costumes for Shabana Azmi in the film. The film earned her the prestigious National Film Award for Best Costume Design in 1989. She worked in over 90 films in her career. She had a late-career resurgence as well – designing the trend-setting and radically different looks for Maine Pyar Kiya (1989) and Hum Aapke Hain Koun!(1994). Hum Aapke Hain Koun! would end up being her last film. She passed away on 6th August 2013 in Bombay.