Radha, a milk-maid rings in the new chapter of love. With the rising rays of the Sun in the east, her steps move faster towards the distant railway crossing to meet Shyamadas, her beloved, a poor railway porter and a poet. Her punctuality, her impatience to deliver the jugful of milk to Shayamadas are indicative of her depth of feeling for the poet and not the cut and dry fulfillment of usual business contract.
Shyamadas has the peculiar gift of composing extempore verses. But, as ill luck would have it, his poetical talent, the poetry in his life, was not appreciated widely. Nobody cared to recognise him as a poet, except Radha and her brother-in-law, Ranjan, a railway points-man. Suddenly, an opportunity presents itself. In a fair in the rural area, there is a contest in composing extempore verses, a conference is organised, a valuable reward for the victor is announced. Inspired by Radha and encouraged and patted by her brother-in-law Ranjan he participates in the competition. Opponents in the competition did not extend their hands of co-operation to him. On the contrary, they sniffed, at first, jeered at him and later flung all their volleys of powerful taunts on him. His low caste, his profession of a railway porter were subjects of all sarcasms.
But Shyamadas remains unstirred and unaffected. He replies to them in a language of love and patience and recites his poetry that abounds in the glory of love. He evinces the fact that poetry entertains no bondage either of caste or profession of affluence. He wins the heart of the audience and thereby wins the reward announced for him. He does not get the reward, the fold medal, all smoothly. He has to face the fresh volleys of taunts, fresh pinching remarks. But he remains undaunted, undisturbed. He quietly resigns and devotes all his talent and energies to his poetry. He is invited again as a participant in a different assembly in a distant village. Radha and Ranjan give him the most cordial send-off. On his return from the assembly Radha fondly enquires about the medal he was expected to be rewarded with. But his negative reply springs surprise on Radha. He pauses for a moment and puts round her neck a necklace, a present for her from the Fair. The metal of the present was not important for the maid, the spirit, of course, behind that present, was invaluable for her. It was a token of love.
The necklace brought immense miseries with it. Radha's aunt felt flared up at the sight of it. She immediately inferred that the necklace is bought with the money stolen from the Daily Sale proceeds. Radha cannot afford to betray the secret of her love with poet, as she is already betrothed to a cruel money lender, Basudeo, in lieu of an unpaid debt due to her late father. Radha silently undergoes the torture, but she meets the poet and in his sweet poetry she forgets everything, every trouble.
The poet gets scent of it and resolves not to meet her again on any pretext, simply to keep the happiness of her beloved alive. In a moment of extreme love he asks her to return the necklace, the cause of her growing miseries. But she refused to comply with the request, so long as she is alive. Under these circumstances of trials and tribulations, there appears a dancing girl, Basanti, with all her troop of dancers, singers and songstresses. The poet faces Basanti as an opponent. The dancing girl flows into a rage and leaves the scene. Kavi comes out victorious. But when he enters his room, he finds Basanti, he dancing girl. The poet feels surprised at the sight, but later the girl reveals the cause of her presence in the room. The poet, after the narration, grows sympathetic towards her and comforts her with his sweet melodious poetry. Radha peeps through the window and feels that her love has been scratched. In her utter confusion she throws the necklace on the poet and runs away, all breathless. Basanti also leaves the next morning.
Ranjan informs the poet that Radha's illness and the seriousness of the ailment. It was almost amounting to insanity. She could be cred of it only if she was married to the man she loved. In the mean time comes Basumati, the elder sister of Radha and wife of Ranjan. She was full of accusation against the poet, as a result of which he is compelled to quit.
Later on, he is obliged to join the dancing party of Basanti. On one occasion, he had to face Narayan, the old leader of Basanti's party, as an opponent. The poet recites devotional songs in reply to the vulgar ones recited by Narayan. Basanti does not like the idea, she expresses her desire to pay Narayan in his own coin, but the poet does not accede to her request. But Basanti rebukes him and hits him hard with her taunts. The poet, under this stress of emotional up-surge, sings a song of a different kind and wins Basanti feels obliged. She feels like giving him something in exchange, but she has nothing else than her mortal frame of flesh to offer. The poet consoles her and requests her to devote herself to God.
Radha's condition was going from bad to worse. Ranjan takes her to the temple Radha Govind in Shyamgarh. Radha finds the poet and Basanti there and falls into a soon, and the poet quietly slips out. Time and tike wait for no man. Radha was nearing her end. After six months the poet re-appears in the temple with Basanti............
What next? See on the Silver Screen. 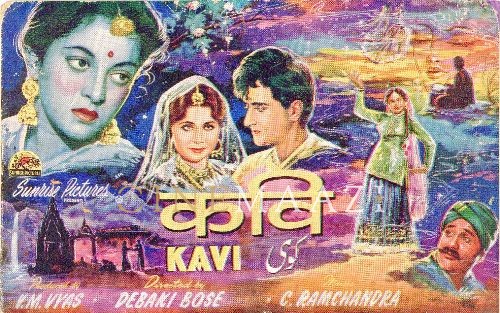