Kedar went to Bombay and met his only sister Geeta. He told her that their days were changed and a luxurious life awaited them. Geeta was surprised and felt extremely happy. But the next morning she found her brother dead in a bath tub.

The other three had also reached Bombay. They thought, after Kedar's death, money must be with Geeta. They ransacked her home, but found nothing. Coming out, they met a new man, Ranjit, who knew all secrets about these criminals. He assured them that he could find out twenty lacs if he was also made a partner. A deal was agreed upon.

Now Ranjit wins the girl - Geeta. He once brings her to Rainbow Hotel where the remaining three are also having a separate room. One more mysterious character is Ruby, the owner of this Hotel. All are busy around the mystery of twenty lacs, revolving which first Alcoupoun, the leading criminal is murdered. Some days later, the second one, Abdulla is killed in a car accident caused by a Time Bomb in the car. Later, the third man, Anokhe is also found dead in the private room of landlady Ruby. She is arrested and while in lockup, she is also murdered.

Geeta is very much shocked to find herself amidst the field of murderers. Her only associate is Ranjit. But one day she meets a police officer, who was dealing with the Bank Dacoity case, in which her brother was involved. That officer reveals that Ranjit too is a member of the criminal gang. Geeta is shocked. All the more, she is herself trapped in one of the murders and is arrested. She is about to be sentenced, when Ranjit puts and unfailing proof that Geeta was innocent and she is saved. Geeta is again perplexed. Why has Ranjit saved her? She again falls in love with him.

One day again, she finds Ranjit making love with a dancing girl Juliet and is very much shocked. Both of them drift apart once again. How is he mystery of the Twenty Lacs unravelled? Who is the killer? Why were so many of them done to death? And what happened to Geeta and Ranjit? The whole thing unfolds itself in a wonderful manner - to be marvelled at - in "LOVE AND MURDER". 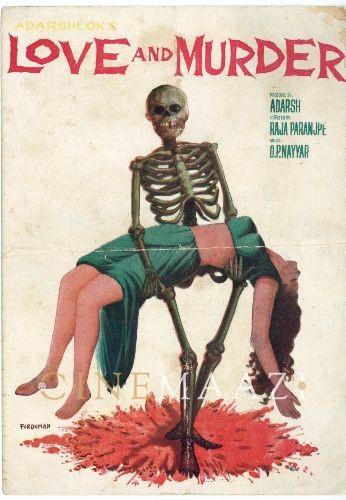