Rajoo, sent abroad to study engineering, returns to his native Simla determined to carve out a career in music. Pushpa, his childhood sweetheart and betrothed, encourages Rajoo’s ambitions, but his conservative father, Mr. Mehta, is shocked.

Rajoo secures a job with a Simla hotel band, and Mr.. Mehta hears that his son had become, of all things, an ordinary bandmaster! This news is cleverly conveyed by Captain Premnath, Rajoo’s rival for pushpa’s hand in marriage. Mr. Mehta demands Rajoo to give up his job forthwith, but finding him unrepentant, he orders him out of his house. Pushpa suggests that Rajoo should go and seek his fortune in one of the major cities like Calcutta, Delhi or Bombay where there were sure to be greater opportunities to further his chosen career. Rajoo agrees with Pushpa, and bidding her a tender farewell, he entrained for Bombay.

Life in Bombaywas neither easy nor kind towards strangers, and Rajoo was somewhat fortunate to find good friends. The panwallah at the street corner had a heart of gold, and was always ready to help Rajoo within his means. Shad, a music director in those early days of the talking film, took fancy to the young Rajoo’s ideas, and he told him- “You are far ahead of your time. One day, your music will make you famous.”

Pushpa suddenly found herself cut off from Rajoo. Her letters remained unanswered. Pushpa could not have imagined that another girl was trying to force her way into Rajoo’s life. Though Rajoo had no feelings beyond friendliness, Titli was madly in love with him. Any trick was good enough for Titli to win her man, and she manipulated that no letter from Pushpa should reach Rajoo, at the same time seeing that none of Rajoo’s letters should even get to the post box.

As time went by, Pushpa anxiously requested her mother to write to her maternal uncle in Bombay who would visit Rajoo and find out what was wrong with him. The uncle’s report spoke of Titli.

Thus with success within his grasp, emotional turmoil was to sweep Rajoo off his fewet. Whilst he had been unknowingly entangled with Titli, Captain Premnath was taking full advantage of the situation in distant Punjab to win Pushpa as his bride. From here on, the romantic drama of “MANZIL” surges forward towards its dynamic climax and the impact of what is so dramatically unfolded can only be enjoyed on the screen. 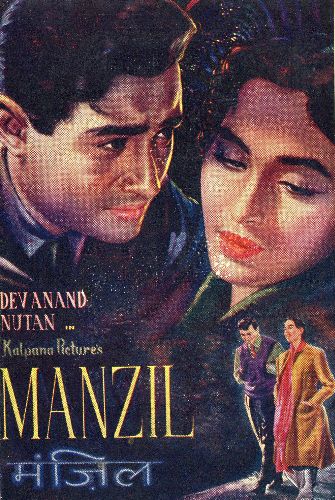