EVEN THOUGH Government has just lately adopted measures against the centuries-old evil of the dowry, it has been exercising the minds of writers, social reformers, public workers and teachers, over the years.

One particular teacher, Kamla, not only gave her mind to the problem of dowry, she also gave speech to her ideas. A gathering she addressed was particularly impressed; as was the general public of her town when a report of her speech was published.

More than particularly impressed by her speech was Kumar, a young engineer, who tried to make her acquaintance when he found her next to him in a bus queue one day. She brusquely turned away, and he felt snubbed.

She had occasion to be confronted by him once again when she visited the offices of the architect who was handling the construction of the new building of her school. She snubbed him once again, little realising that he was the person who would be handling the job of the school building.

Initial antagonism soon turned into mutual interest between the two, and finally developed into love.

By a curious contrivance of circumstances, Kumar's sister Rajni had met Kamla's brother Raja, and had fallen in love with him. The two families were further tied up by a strong bond of friendship between Kumar's eight year old sister baby and Kamla' younger brother Rattan.

Between the maidservant and the manservant there was no barrier whatsoever, and they soon took the path of matrimony. Raja and Rani were guests of honour at the wedding celebrations, and since they themselves had marriage on their minds, which however they could not bring about, they felt sad on the happy occasion.

The marriage of Raja and Rani could not be brought about because Fakirchand, Raja's wealthy but narrow-minded father, had made up his mind that he would not let Raja marry until and unless he received at least twenty thousand rupees dowry. This would be an impossible condition for Dhaniram, Rajni's father, a middle class man.

The two fathers met, discussed the marriage of their respective daughters, the question of dowry was brought up, a class arose, resulting in bitterness between the two. Each ordered his children not to associate with the children of the other family. It developed into mutual hatred, even on the part of the children, which led to many happy, unpleasant incidents.

More youthful, more impatient, Raja and Rani could bear the situation no longer. With the help of Kumar and Kamla they evolved a scheme calculated to bring their respective fathers to their senses. And they put the scheme into operation. Repercussions naturally arose, leading to a happy denouement. 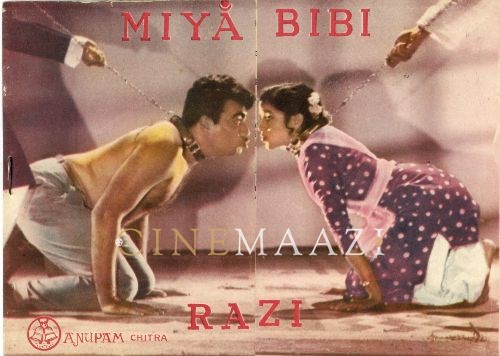