This is the story of a gang of few influential people in a small town who, taking advantage of emergency, has let loose a reign of terror for their personal benefits. This gang is headed by Rao Sahib Banwarilal. The chief of police of the town tenders his resignation in protest against their unconstitutional use of authority warning them of the consequences, which of course falls on deaf ears.

The nefarious activities of the gang result in forced sterilizations, demolitions of houses of the innocent and large scale arrests bringing bad name to the higher up authorities who are kept in dark by the gang about their mischief by assurances that every act is voluntary and that the people have not been pressurized.

But as there is Ram to every Ravan, five young men from a people's party to resist the terror of this gang. These young men are Anitav Bachan, Shahi Kapoor, Sevanand, Rakesh Khanna and Qanoj Kumar. With their daring and life staking exploits they effectively counteract the designs of the gang releasing the innocent, saving their house from demolitions and preventing forced sterilizations.

Impressed by the stunning courage of Anitav Bachan, Rao Sahib's daughter Monika falls in love with him and elopes with him leaving Shatru, her fiance and father's accomplice, high and dry. But before they get married Shatru successfully schemes to get Anitav forcibly sterilized without the knowledge of Monika. The shock of this unbalances Anitav's mind and he fails to turn up to marry Monika at the appointed time and place. Remembering her father's warning that Anitav was only misleading her to have avenge on him, she returns to her father heart broken and obeys her father into marrying Shatru.

After marriage a drunk Shatru reveals to her how he got Anitav forcibly sterilized. Learning of this truth, she escapes from her bridal bed and reaches the demented Anitav while Shatru lodges a report with the police about her adultery and kidnapping. As medical science cannot help Anitav, she marries him in a temple and goes on pilgrimage begging for a child which alone can cure Anitav. The almighty grants her prayers and she is pregnant.

Anitav now takes revenge on the gang who are on run.

Anitav and Monika are ultimately arrested for bigamy and adultery.

How two new lawyers Johar and Rajendranath get them cleared from a hilarious and thrilling climax? 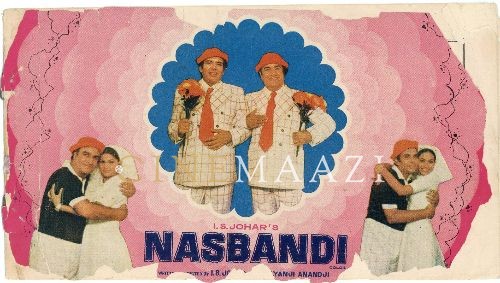