Ram and Rekha, two young colleagues, are attracted to each other at a chance meeting. Ram has his roots in the village and is bound by a vow given to his foster-faster, Rahimchacha, to open a school for the village children after completing his education and dedicate himself to the uplift of the village where he was born.

Rekha is a product of modern thinking and Urbanised living. Being the daughter of rich parents, she has no idea whatsoever what it means to live in a village. She is, however, deeply in love with Ram and, despite his doubts about the success of their marriage in their village, leads him on to the altar.

It is a backward village untouched by civilsation where Ram and Rekha start their married life. Their happiness is short-lived as very soon Rekha is enveloped by boredom and, in a fit of rage accentuated by the visit of some of her shallow friends, she blows her top at Ram and returns to the city.

Ram remains true to his pledge, refusing to budge or compromise with his ideal. In the city, Rekha takes up a job as a tourist guide in a luxury coach. The job offers her but scant satisfaction. Here too she gets bored and disillusioned. She pines for Ram as much as Ram pines for her back in the village.

One day who should be seated opposite Rekha in the coach but Ram accompanied by his pupils whom he has brought along to see the city.

As the luxury bus plies across the city’s landmarks, the lovers have a poignant flashback which rekindles the flame of love latent in both. At the famous Shaking Minarettes of Ahmedabad—a unique architectural phenomenon where you shake one stone-built Minarette and behold the other responding to the vibration by showing tremors—Rekha has a revelation in store.

If the two monuments in stone can respond to vibrations and live in harmony, the thought fleets past her mind, what about human beings?

“When are you returning home, Ram,” Rekha enquires as the bus reaches the terminus and they are about to part.

The end is the beginning of a new approach, a fresh bid to understand that the Cause is the Thing and Love should know no barriers or differences between the Urban and the Rural. 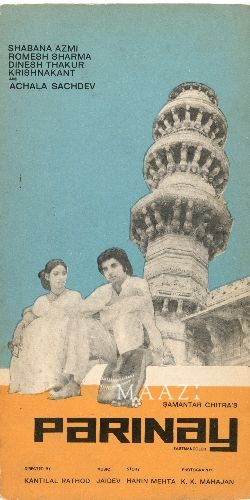