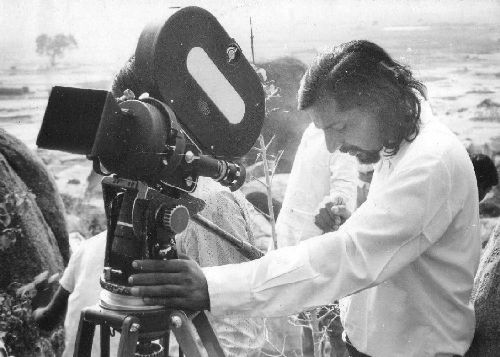 If one other person than Mrinal Sen, Mani Kaul and Basu Chatterjee can be considered integral to the birth of the Indian New Wave, it is K K Mahajan. A virtuoso cinematographer, his artistic accomplishments easily put him in the conversation of being among the greatest cinematographers of world cinema. Over the course of 84 feature films, numerous commercials and advertising films, Mahajan crafted a unique style and a legacy of unmatched innovation.

K K Mahajan was born in Gurdaspur, Punjab on 2 October 1944. He graduated with a physics degree from Panjab University, Chandigarh. He was interested in cinema and hence joined the Film and Television Institute of India in Pune to pursue a course in Motion Picture Photography. He was a diligent student and passed out in 1966 having earned gold medal honours. His experience there will be formative, not only because he would meet Kumar Shahani there, but his work in Shahani’s experimental graduation film The Glass Pane (1966) would convince Mrinal Sen to hire him as the cinematographer for Bhuvan Shome (1969). Sen would later remark that what convinced him was Mahajan’s ability to work in adverse conditions, as he would go on to do for most of his career.

Between 1966 and 1969, Mahajan worked on a number of significant documentaries such as Shyam Benegal’s Child of The Streets (1967), Shahani’s A Certain Childhood (1967) and noted film historian B D Garga’s  Amrita Shergill and Mahabalipuram (1968). 1969-70 would be a watershed period for both his career and Indian cinema. Three films – Mrinal Sen’s Bhuvan Shome (1969), Basu Chatterjee’s Sara Akash (1969) and Mani Kaul’s Uski Roti (1970) would release and kickstart arguably the most daringly experimental phase of Indian cinema. Mahajan’s work in all three – the psychological realism imbued in Bhuvan Shome and Sara Akash’s frames, and the experimentation with wide and telephoto lenses in Uski Roti – was so shatteringly original that he was awarded consecutive National Awards in 1970 and 1971. He would go on to shoot nearly all of Mrinal Sen, Basu Chatterjee and Kumar Shahani’s films over the course of the next three decades.

His work in Kumar Shahani’s films Maya Darpan (1972), Tarang (1984), Khayal Gatha (1989), Kasba (1990) and Char Adhyay (1997) is especially notable. Maya Darpan and Tarang especially are considered milestones in formalism, while Mahajan’s camerawork could create moments of breath-taking beauty even within Shahani’s Brechtian style in Kasba and Char Adhyay. The comfort and understanding between Shahani and Mahajan were such that they would shoot entire scenes without a word uttered between the two. He also shot Shahani’s experimental short film Obsession and Gieve Patel’s Chairs, which were part of a workshop organized by Akbar Padamsee in the late 1960s. He met his future wife Praba during the course of this workshop.

A man of unique vision, Mahajan was considered as a giving teacher, mentoring many young cinematographers. His eccentricities (like always shooting with a 9lite light blazing from behind the camera) also contributed towards giving his work an idiosyncratic texture. His influence on Indian art cinema was such that in an exhibition at the Museum of Modern Art in New York, of the 15 films being screened 13 were shot by him. The last film he shot was Anup Singh’s experimental documentary Ekti Nadir Naam (2002).

In 1999 he formed the group called Cinematographers’ Combine with other cinematographers as a collective. He also conducted multiple workshops with students of both FTII and the Satyajit Ray Film and Television Institute. He was awarded the Kodak technical Excellence Award by the Mumbai Academy of the Moving Image. He was made an Honorary Member of the Indian Society of Cinematographers in 2003. He also received lifetime achievement awards from the Indian Documentary Producers Association in 2005, by IIFA in 2006, and the Katha Centre for Film Studies Lifetime Achievement Award in 2007.

Mahajan was diagnosed with cancer in 2002, although that did not stop him from conducting workshops with students. An indisputable legend of Indian cinema, he passed away on 13 July 2007.