"PYAAR KA SAAGAR" is a story of nobility of love and sacrifice. of self-abnegation, of quirks of fate and of the soaring spirit of man that conquers all the unsurmountable obstacles.

Kishan and Bishan were two ideal brothers. Krishan was studying at Bombay, while his elder brother Bishan was in Ahmadabad serving a noble Seth there, who unknown to Kishan happens to be Radha's father.

On one stormy day, Kishan and Radha meet in peculiar circumstances in a stranded bus on the road to Mahabaleshwar. They fall deeply in love, but a day comes when Kishan and Radha have to part, as Kishan has to leave for Bombay to complete studies for M. A. final. Meanwhile, destiny takes a hand and Radha's father impressed by Bishan's sagacity and goodness proposes Radha's marriage with Bishan.

In Bombay, on the other hand, Kishan finds it hard to concentrate on his studies despite admonitions from his friend Ramesh and leaves for Mahabaleshwar. Radha is very happy to meet him again, but when Kishen tells her that he has decided not to appear in the examinations, she turns serious. She tells him to go back and not to see her till his examinations were finished. She exhorts him to rise up to the faith which his brother reposed in him and adds, "LOVE DOES NOT DEGRADE HUMAN BEINGS, BUT UPLIFTS THEM", And this exhortation wakes up Kishan to his responsibilities and they part with Kishan's having an assurance from Radha that when he approaches her father for her hand in marriage there will be no difficulty as her father would never marry her to anybody else without her consent.

Radha's father comes to Mahabaleshwar to take Radha's consent for her marriage with Bishan, and due to the misunderstanding about the names Bishan and Kishan caused by sheer hard hearing of her aunt, Radha thinks that she is going to be married to Kishan and she willingly gives her consent.

And at last, when she is about to garland Bishan on the marriage day, she discovers that FATE HAS STRUCK HER A FATAL BLOW, and she faints......... 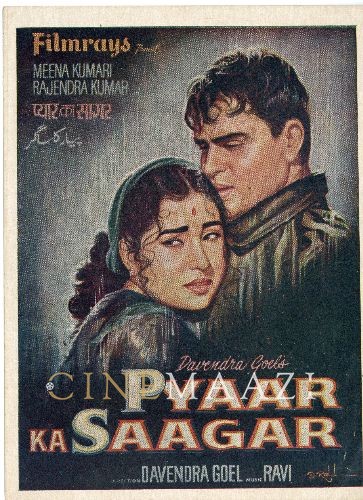