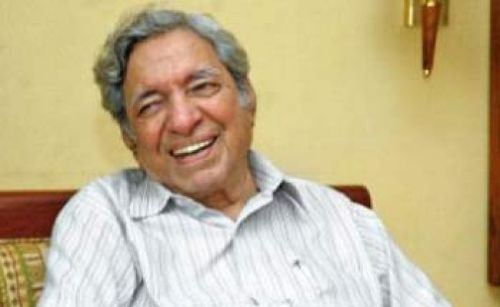 Born as Ravi Shankar Sharma on the 3rd of March 1926 in Old Delhi to Pt Kanhaiyalal Sharma and Taravati Sharma, Ravi has contributed to Indian cinema with some of its most memorable songs. Growing up, he was the sole person in his family who was musically inclined. He harboured the dreams of becoming a singer from an early age and hummed along with R C Boral and Pankaj Mullick’s songs. He was fond of the bhajan Tum bin hamri kaun khabar le from Sohrab Modi’s Pukar (1939) and would often try singing it at home. One day, his father took him to the satsang where he impressed all the elders. He soon picked up the harmonium to play his music while singing.

He worked at the Delhi Cloth Mill while continuing his studies alongside. After failing his matriculation exams, his family members suggested that he undertake training in electrical jobs, which would ensure a constant source of income for him.  Eventually, he was even hired to work with Post and Telegraphs, Delhi. He had continued to sing alongside his job. He got transferred to Pathankot in 1950. But after two years of working in that job, the monotony started to affect him. Shifting to Bombay presented an exciting prospect to him, and he happily took the opportunity to go there on 24 April, 1950. In 1946, he got married to his wife Kanti and had his first child, Veena, but left her in Delhi as he was not yet settled in Bombay. The idea of Bombay reignited his passion for music. In 1951, he sang in S D Burman’s chorus in Naujawan’s Jhanak jhanak jhan jhan, while continuing with his electrical job. Hemant Kumar made his debut as a composer in 1952’s Anand Math, where Ravi sang in the chorus again. But it earned him the scope to be Kumar’s assistant in future projects. Ravi assisted Kumar in several films such as Shart (1954), Jagriti (1954), Nagin (1954), Durgesh Nandini (1956) etc.  It is well known that he and Kalyanji played parts of the instruments in Nagin’s (1954) tune.

In 1951, his wife and daughter joined him in Bombay. In a tale of the past, he got the offer of making the music for Devendra Goel’s Vachan (1955) through Goel’s nephew Chandra. The bad part of the deal was that Chandra was also credited for Ravi’s work, even though he was hardly involved in the music production. Later, Ravi revealed the whole ordeal to Goel when he was approached to work on Albeli the following year. Justice was served when Goel took out Chandra’s name for the HMV records. Ravi made the music for a majority of Goel’s films such as Ek Saal (1957), Narsi Bhagat (1957), Chirag Kahan Roshni Kahan (1958), Door Ki Awaaz (1964), Dharkan (1972), Ek Mahal Ho Sapno Ka (1975) and Aadmi Sadak Ka (1977).

In the 50s and 60s, he composed music for almost 21 films; notable among them are Mehndi, Ghar Sansar (both 1958), Ghunghat (1960) and Bombay Ka Chor (1962). The soundtrack for Mehndi, in particular, was hugely successful with songs like Woh aaj apni mehfil mein aaye hue hain. Songs like Cat Cat Cat mane billi and Yeh raate yeh mausam from Dilli Ka Thug (1958) also attained great popularity. Apparently, Guru Dutt really appreciated his work in Mehndi and wanted Ravi to compose the music if he ever made a Muslim social. When he planned to make Chaudhvin Ka Chand, Ravi was the first name in his mind for its music. The film is one of the highlights in Ravi’s career. It is one of the few films where Ravi used the essence of Pahadi-song in the title track. Some other film songs where he used the Pahadi songs are Aage bhi jaane na tu, Din hain bahaar ke, Kaun aaya ki nigaahon mein chamak jaag utthi (Waqt, 1965),Husn waale tera jawaab naheen, In hawaon mein (Gharana, 1961).
Ravi became a favourite of B R Chopra and Yash Chopra and worked extensively with them in films like Gumrah (1963), Waqt (1965), Hamraaz (1967), Aadmi Aur Insaan (1969) and Dhund (1973). He continued working with B R Chopra in films like Dahleez (1986), Nikaah (1982), Aaj Ki Awaaz (1984) and Awam (1987).

He was bestowed with the Padma Shri in 1971. He won the Filmfare award twice in his career for his work in Gharana and Khandan (1965). He also received nominations for Chaudhvin Ka Chand, Do Badan, Hamraaz, Ankhen (1968) and Nikaah. Songs composed by him resulted in Filmfare wins for Mohammed Rafi (Chaudhvin Ka Chand), Lata Mangeshkar (Khandan), Mahendra Kapoor (Gumraah and Hamraaz),Asha Bhosle (Dus Lakh) and Salma Agha (Nikaah). He also ventured into the Malayalam film industry where he composed for the filmPanchagni (1986). He won the National Film Award for Best Music Direction in 1995 for Parinayam and Sukrutham (both 1994).He also won two Filmfare Awards (Malayalam) for Parinayam and Sargam (1992). He was awarded the Kerala State Film Award for Best Music Direction on two occasions – for Nakhakshathangal(1986) and Sargam. He worked in an estimate of 14 films in the Malayalam film industry under the name of Bombay Ravi.
In 1986, Ravi lost his wife. They had three children, Veena, Chaya and Ajay. Ajay is married to the actress Varsha Usgaonkar. He passed away on 7 March 2012 in Mumbai.