God created man, Man made society and Society gave birth to environments which changed the destiny of man.

Janki was born to a humble 'PUJARI' but was lifted in her sleep by a bad character and sold to a prostitute while she was only six. When Janki woke up, the atmosphere was not that of a temple but a bazar where beauty was on exhibition and bodies were on sale. Janki learnt the tricks of the trade rather reluctantly. She grew into a comely nautch girl and had her first mujra. Panna Bai made a deal with Thakur Vikram Singh for a large sum of money. Janki was to become his mistress. Janki was helpless:  she only prayed to ''Girdhar" her family deity, to help her. And her 'Girdhar' did help her at the last   moment when her modesty was on the verge of being outraged. Ramesh, the bangle seller saved her from the clutches of Vikram Singh.

Ramesh and Janki were married under the patronage of Munshi Din Dayal, the manager of Thakur Virendra Singh, brother-in-law of Vikram Singh.

Virendra Singh had no issue although his marriage took place with Ratna fifteen years ago. lncidently Ratna became pregnant after all. But she gave birth to a still born son.

The doctors forbade Virendra Singh to tell her about the mishap till she regained enough strength, Munshi Din Dayal came to her succor. He brought Suraj, the first born son of Janki and put him in Ratna's lap. Suraj became a great Thakur. Had he grew up in his original parents' home, he would have been selling bangles like his father.

Years rolled by. It so happened that Kiran came to study at the same college where Prakash's original son of Thakur Virendra Singh was also studying. He was a few years younger to Suraj. Kiran and Prakash fell in love with each other. Prakash was rich and Kiran was poor. Her mother stitched clothes of the neighbours and toiled day and night to fulfil the promise she had made to her late husband Ramesh.

Janki approached Prakash's mother for matrimony. Had not Vikram Singh appeared at this juncture, the marriage would have been solomnised.

He recognised Janki as the nautch girl.

What happened to Kiran and Prakash's idea of a happy marriage? Whether Suraj, the long lost brother of Kiran, was united to his original mother and sister It shall all remain a guess, dear patrons till you see "Raakhi Aur  Hathkadi"  for yourself. 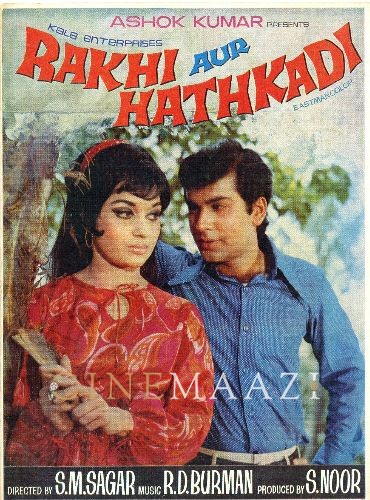