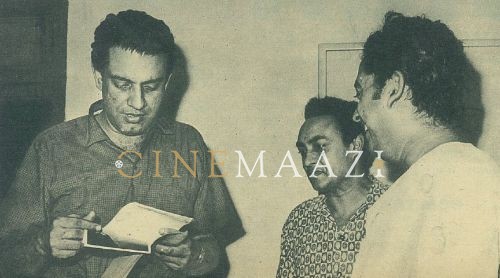 Actor Anoop Kumar Ganguly is memorable for his roles in films like Junglee (1961), Dekh Kabira Roya (1957) and Gauna (1950). He made a mark with the hit entertainer Chalti Ka Naam Gaadi (1958) which also featured his famous brothers – legendary actor Ashok Kumar and melody king Kishore Kumar. Starting out as a character actor and a comedian in Hindi films, he was also known for his singing ability like his brothers and lent his voice for a few films. Acting in more than 60 films, largely in supporting roles, over the course of his career, he also featured in television serials like Talaash and Bhim Bhavani. He was also nominated for the Filmfare Awards for Best Comic Actor for Chalti Ka Naam Zindagi (1982).

He was born Kalyan Kumar Ganguly on 24 March, 1926 in Khandwa, Central Provinces and Berar (now in Madhya Pradesh). Hailing from a Bengali family, he was the son of Gouri Devi, who belonged to a wealthy family, and a lawyer father Kunjalal Ganguly (Gangopadhya). He was the second-youngest of four siblings—Ashok Kumar and Sati Devi were his elder siblings, while Kishore Kumar was the youngest.

When he was in his twenties, he came to Bombay from Khandwa at his brother Ashok Kumar's behest. Entering the film industry, among the early films he acted in are Gauna, Vidyasagar (1952), Firdaus (1953), and Samaj (1954). He played the lead role in Jagat Pictures’ drama Gauna in 1950, with Usha Kiran. It was directed by Amiya Chakrabarty.

In the 1961 hit Junglee, he played a character named Jeevan in this comedy film produced and directed by Subodh Mukherjee. The film had music by Shankar Jaikishan and lyrics by Shailendra and Hasrat Jaipuri. It starred Shammi Kapoor, and featured Saira Banu, in her debut film, which earned her a Filmfare nomination for Best Actress. The cast also included Lalita Pawar, Shashikala, and Asit Sen. A light-hearted musical, the song Chahe koi mujhe junglee kahe became immensely popular.

He featured as a character named Mohan in the Amiya Chakrabarty directed romantic comedy Dekh Kabira Roya (1957). A farcical comedy about the vicissitudes of modern love, Mohan (Anoop Kumar), Pradeep (Daljit), and Ranjeet (Jawahar Kaul) are three struggling artists—singer, painter, and writer, respectively—who live together in the same house. Romantic hijinks occur when the trio meet three lovely girls, Geeta (Ameeta), Rekha (Anita Guha), and Kalpana (Shubha Khote), with very specific ideas about art and love. The three male friends decide to help each other out by using their talents; however, their lives get entangled and utter and hilarious chaos ensues.

The 1958 hit musical comedy Chalti Ka Naam Gaadi (1958), directed by Satyen Bose, starred Madhubala with the Ganguly brothers Ashok Kumar, Anoop Kumar, and Kishore Kumar. It revolved around a middle-aged man who resents women due to some misunderstandings and forbids his younger brothers from marrying. The film opened to major commercial success, eventually becoming the most successful work of Bose and the Ganguly brothers, as well as Madhubala's fourth consecutive major hit of 1958, establishing her as the top female star of late 1950s and early 1960s. The film also received positive reviews from critics for its comical situations, soundtrack, execution and performances, and has attained classic status over the years.

He also acted in the 1982 film Chalti Ka Naam Zindagi, directed by his brother, Kishore Kumar. The film’s cast included Ashok Kumar, Kishore Kumar, Rita Bhaduri, Pradeep Kumar, Harindranath Chattopadhyay, Master Bhagwan, Amit Kumar, and others. A sequel of sorts to the super successful Chalti Ka Naam Gaadi, the film featured the three brothers as owners of a hotel, where the guests are evidently being frightened by ghosts.

Anoop Kumar passed away on 20 September, 1997, aged 71. He was survived by four daughters and a son.