Holy men and women of India propitiating God Vishnu, the Overlord of the whole world, to take birth and destroy Evil from this earth to establish the reign of peace and happiness for Mankind.

The lotus-eyed Lord Vishnu resolves to come as Incarnate on this earth as the son of King Dasarat of Ayodhya and makes the people calm.

King Dasarat i performing YAGNA - Sacrifice - to have children, where the God of Fire comes out of the YAGNA KUND and gives the AMRIT KUMBH.

The birth of God Incarnate RAMA has taken place.

The whole of Ayodhya is rejoicing on the birth of RAMA, LAXMAN, BHARAT and SHATRUGNA with their happiness and folk dances etc.

The four brothers are delivered into the Great Guru Vasistha and they are receiving instructions form their great teacher. The Vedabhyas and training in Archery is completed.

Guru Vasistha brings Rama, Laxman, Bharat and Shatrugna to the Court of Dasarat, the King of Ayodhya, where the Great Sage Vishwamitra, frustrated in holy endeavours by the impending Rakshasas, had come to prevail upon the reluctant King to allow Rama and Laxman to accompany him to the forest to put an end to the perpetual menace. Rama and Laxman set forth with Vishwamitra.

Led by Vishwamitra, Rama and Laxman spot the She Devil TARAKA, the curse of the forests. She is slain by Ram in the ensuing battle, an all other plunderng and wicked Rakshasas are also driven away and the entire forest is made free from danger.

Rama and Laxman now accompany their Guru to attend Sita's Swayamvar to be performed by the King of Mithila, the Righteous Janak.

On the way to Mithila, Rama liberates Ahalya from Gautam's curse and restores her original form.

Vishwamitra, Rama and Laxman then come to the City of Janak - Mithila.

Sita with her maids has come to pray to GAURI in a happy mood in the palace garden where she sees Rama and Laxman plucking flowers in the garden; Sita beholds Rama and is charmed in the first encounter.

In the Court of King Janak, kings from many lands have come to attend the Swayamvar Ceremony. The Great Divine "Bow" is placed in the centre of the Court. The bards announce the conditions of the Swayamvar. One after another many kings try to lift the "BOW" but are forced to retreat in humiliation. The unhappy King Janak gives vent to his misgivings at the failure of the Kings. Janak's taunting remarks provoke Laxman who is however calmed down by the soothing words of Rama. At Vishwamitra's bidding, Rama lifts the "BOW" and breaks it into two pieces. Sita puts Jai Mala round Rama's neck. The frustrated kings leave the Court in despair and indignation.

In the midst of such auspicious ceremony appears Parsuram with his battle - axe on his shoulders. Raging with anger he challenges Rama for a battle but Rama calms him down and Parsuram surrenders his arms in the feet of Rama.

The aged King resolves to install Prince Rama as the Ruler of Ayodhya. The news of great jubilation reaches the people of Ayodhya.

However all is not well within the precincts of the palace of Ayodhya. One Maid, Manthara having heard the news of the enthronement of Rama is filled with jealous wrath. She goes to Queen Kaikeyi to inform her about the news.

What follows in the bedchamber of Queen Kaikeyi is the turning episode in the Epic. The sinful woman prevails upon the queen that her own son Bharat should be enthroned and Rama should be asked to go to forest for fourteen years.

Queen Kaikeyi now resolves upon the evil design and asks Dasarat for two boons promised to her by the King. Bharat should be enthroned and Rama should be banished for 14 years. The King is forced to change his resolution and Rama is to leave in exile. Sita and Laxman entreat Rama to allow them to accompany him. The afflicted King is overborne with grief and dark gloom descends on the distressed people of Ayodhya. The life fades out of the heart of the King as Rama departs.

On the banks of the Ganga, in the land of ferry-men, Khevat was rejoicing with his fellow men where Rama, Sita and Laxman arrive. On their arrival they meet the ferry-man who entertains the party in exile with utmost hospitality and the Khevat Raj rows them across the grief, he severely reproaches her. Intent upon bringing his brother back, Bharat sets for the forest.

Bharat, accompanied by the people of Ayodhya beholds the hermitage of Rama, goes on foot to Chitra Kuta to meet Rama. In spite of entreaties and persuations, Rama who is vow-bound by his father's command remains steadfast and refuses to return back. Bharat is reconciled to becoming Rama's Deputy and caries his Padukas (sandals) as a precious trust to represent Rama. Rama, Sita and Laxman now leave Chitra Kuta.

Rama, Sita and Laxman now arrive at Panchavati.  The splendour of Nature woodlands of flowering trees and frequented by wild life, Panchvati enchants the party. The spot is chosen to construct the forest retreat. Laxman builds the hut and they start living there.

Shurpanaka, the sister she of King Ravan of Lanka, arrives at the hermitage. Consumed with passion and charmed by the youth of the two brothers, proposes to marry one of them. Laxman highly incensed against the demon, chops off her ears and nose. Mutilated, screaming Shurpanaka plunges into the deep darkness of the woods.

Seated on his glowing throne, surrounded by his ministers, the glorious Titan King Ravan is a picture of indulgent pleasures. While he was seeing and enjoying the dances of Sinhalese Court Dancers, Shurpanaka comes there and with her words rouses Ravan from his stupor. Ravan swears to retaliate.

Ravan comes to Marich and pursuing his evil design he sends Marich in the guise of a deer to the hermitage of Rama.

Sita enamoured of the deer requests Rama to slay the deer. Leaving Laxman to guard Sita, Ram goes in pursuit of the kill. After a while Sita hears Rama's distress-call to Laxman. Laxman suspects foul play but Sita insists and sends Laxman to Rama's assistance.

Thereupon the plotting Ravan appears in the guise of a Sanyasi Brahmin and with flattering words seeks hospitality from Sita. Sita unaware of the evil design of her abduction crosses the limit set by Laxman. Ravan seizes hold of her and carries her away by a small flying chariot.

In the sky Ravan's chariot is flying with Sita. The groans of Sita are heard by Jatayu the King of Birds and he attacks Ravan. In the ensuing battle Jatayu is fatally wounded and Ravan resumes his flight with Sita.

Rama and Laxman return to the hut in Panchavati only to find Sita missing.

Lamenting Rama and Laxman set out in search of Sita.

Rama and Laxman meet Jatayu who was breathing his last and Jatayu informs about the kidnapping of Sita.

Rama and Laxman visit Sabar in her Ashram and proceed further.

In the kingdom of Kishkindha, Rama establishes friendly contacts with monkeys and their Chief Sugriva who was staying at Kishkindha, sends Hanuman to interview Rama as he suspects Rama's arrival as a foul play by Bali. Thus Hanuman gets first darshan of Rama, an alliance is reached between Rama and Sugriva. Rama here finds Sita's jewel and ornaments.

Sugriva requests Rama to help him against his brother, Bali, in a fight between Bali and Sugriva. Rama inflicts a mortal wound on Bali. Sugriva is installed as the King by Rama and Sugriva helps in building up an army and sends troops in search of Sita in all directions.

On approaching the ocean the moneys are discouraged but Hanuman undertakes to cross the ocean and he jumps from Rameshwar to Lanka.

Hanuman now arrives in Lanka and reaches Asoka wadi where Sita was concealed in captivity. Seeing the female Titans guarding Sita, Hanuman hides himself in the branches of the tree.

Ravan approaches Sita with Sweet words and dainty gestures but Sita replies his advance with utter distain. With the approach of midnight the Titans fall asleep leaving Sita to her lonely confinement.

The mighty Hanuman who watched this cruel drama from his leaf hideout throws Rama's MUDRIKA on the ground at the feet of Sita. She at once recognises the token of ring of Rama. Hanuman then comes out from his concealment and apprises Sita of his credentials and the all about his mission.

Hanuman then sets destroying Asoka Vatika which awakens the sleeping Titans who flee in terror. Megnad then comes with warriors and ties Hanuman in a Rassu and takes him away captivated to the court of Ravan.

In the Court, Ravan, after hearing Meghnand's words, orders that Hanuman's tail be tied with clothes and set to fire. The undaunted Hanuman thereupon sets out igniting fierce and terrible fire in the land of the Titans till the whole of Lanka is on fire.

The growing inauspicious portents all around makes Ravan sullen and pensive. The overhanging, impending catastrophe brings Mandodari and Vibhishan to Ravan who seek to restrain him from pursuing its evil-design. The enraged Lord of the Titans gives retort by sending Vibhishan away with a kick. Aggrieved and misunderstood Vibhishan seeks shelter in the Camp of Rama.

Angada-sent by Rama-comes to the court of Ravan on a true mission. He tries to impress upon Ravan that we Indians generally do not like to fight, but if a fight is forced upon us, we do not go back. Angada, insulted by Ravan, returns back to the Camp of Rama and reports that the War cannot be averted.

Preparations for the battle in the Camp of the Rakshasas.

Biter fighting takes place. Laxman is struck down and becomes unconscious with Brahmastra. While Laxman is lying in the battle field, timely action of Hanuman saves his life. Returning to consciousness Laxman again goes to Meghnad's sacrifice and slays him.

Both the armies now having rallied their forces prepare for the extraordinary combat.

The furious combat ensues between the monkeys and the Titans and the mighty warriors seek to destroy each other.

Thereafter between the two mighty warriors Rama and Ravan ensues an incomparable duel. The combat of combats enters into a formidable display of powers and after terrifying fluctuations in the duel that follows Rama in an earth-shaking blows slays Ravan, the Titan Overlord, of Lanka.

The victorious Rama receives Sita and sets out for Ayodhya with Sita, Laxman and Hanuman giving the throne of Lanka to Vibhishan.

Bharat welcomes Rama at the gate of Ayodhya

The victorious Rama is then installed as the King amidst great rejoicings among the people of Ayodhya. 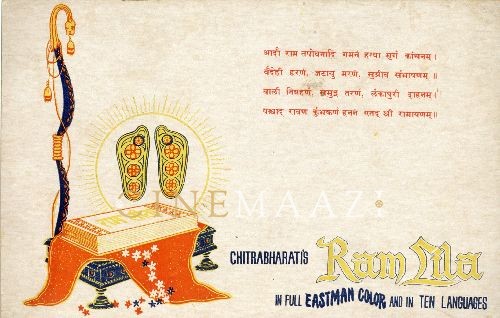