HE WAS known as "Dada" : the acknowledged leader of the neighbourhood, and the truck driver of the Royal Theatrical Company. He spurned the authority of Society, was authority himself. Rough and ready and overwhelming, he held sway over everybody, and yet his heart was firmly in its place. He accepted Munni (who loved him) as a nuisance, but when Kalila tried forcibly to lead Munni into matrimony, "Dada" pinned Kalila down in a wrestling bout. That pleased Munni immensely, but "Dada" had done it not for her sake but for his own principles.

Around "Dada" revolved the little world in which he had grown up, awed by him and yet loving and respecting him. He was not chained by it, however, for when Chhabi, by a contrivance of coincidence and accident, came under his wing-grief-stricken and driven out of her home by Satyanath's wife who did not approve of her romantic encounters with their neighbour Ravi, Rukmini Seth's son - and when Society questioned the propriety of Chhabi staying with Dada, he immediately decided to leave the neighbourhood and find a home elsewhere. Even though he treated Chhabi like his own sister, and even though Society as well as Munni was convinced that he was honourable, he was adamant about leaving. He wanted to opt out of the Society that suspected, without reason, the intentions of a person; that derided the helplessness of its components; and that revelled in destruction rather than in construction.

Munni's plaints, Goba's entreaties, and finally Chhabi's quiet, self-effacing exit, did not move him a whit.

Chhabi, because she did not want to throw Dada's life completely out of gear, removed herself from his orbit : as well as from Ravi's life. Dada had been willing to spurn Society, in order to support her, but she evidently could not face up to Society. Tired of the struggle, she once again cast herself into the fury of the storm of life.

Who was Chhabi? Did she find the peace she sought? What almighty power impelled Dada to touch Chhabi's life with the alchemy of happiness? What became of Ravi? The strands of the lives of these various people, these various components of Society, were thus tangled and hopelessly, irretrievably lost in a maze. If they were retrieved and straightened out, Society hardly figured in the scheme. The denouement is one of the highlights of Ashok Kumar Productions Ltd.'s "SAMAJ" 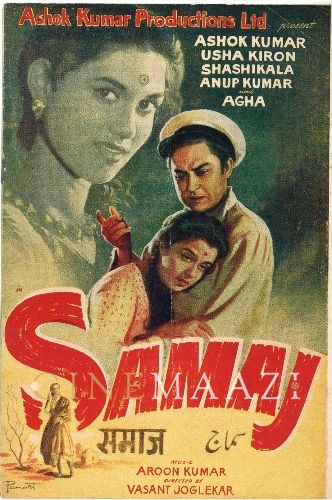